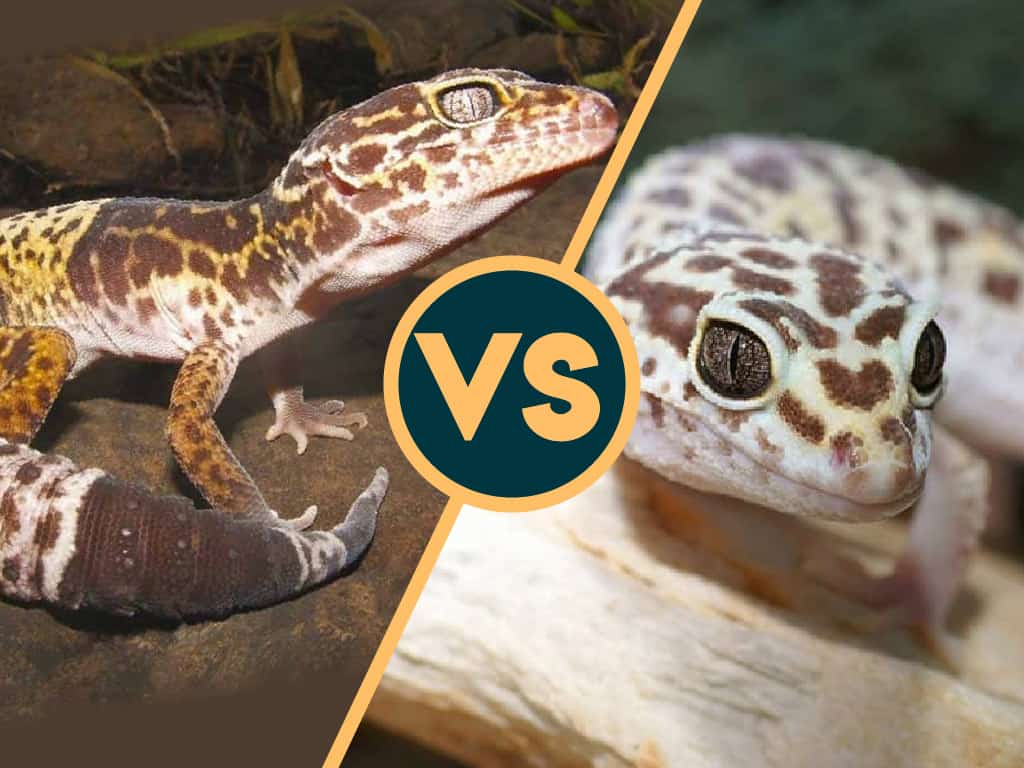 Are you wondering what is the difference between African fat-tailed geckos vs. leopard geckos? Well, you aren’t the only one! These two species of geckos look so similar that even expert herpers wouldn’t blame you for mistaking one for the other!

The main reason why the African fat-tailed gecko and leopard gecko are so similar is because they are actually fairly closely related. They share some physical traits like movable eyelids and claws (they both lack sticky pads on their toes). However, that doesn’t mean they are the same.

As you may have guessed, the African fat-tailed gecko is from Africa, while the leopard gecko originated in the Middle East. But the differences between these two geckos don’t end there!

Continue reading to find out what sets these two geckos apart and which species is better for you!

The main differences between the African fat-tailed gecko vs the leopard gecko are:

If you are looking for the best gecko pet, then you are probably curious to see how African and leopard geckos compare. Leopard geckos and African fat tail geckos are members of the same subfamily – Eublepharidae. However, they are two different species that come from two, very different, parts of the world.

This is just the beginning! Keep on reading to find out how these two species of geckos compare and which one is right for you!

About These Two Species

As mentioned previously, leopard geckos and African fat-tailed geckos belong to the same subfamily, but they are two distinct species.

The African fat-tailed gecko (Hemitheconyx caudicinctus) originated in the scrublands of Western Africa, from Senegal to Nigeria and Cameroon.

The leopard gecko (Eublepharis macularius) is native to arid regions of Afghanistan, Pakistan, Iran, and India.

Unlike African fat-tailed geckos, leopard geckos are common pets kept by experienced owners and newbie herpers alike. Due to their popularity, leos are sold by breeders and pet stores and can be purchased for less than $50. However, there are many unique morphs available and they are usually pricey, costing several hundred or even several thousands of dollars.

There’s no doubt that both fat-tailed geckos and leopard geckos make wonderful pets. While they have very similar appearances, they have different husbandry requirements and can’t be kept together in the same terrarium.

Understanding the differences between leopard geckos vs. fat-tailed geckos can help you decide which one is a better fit for you.

While fat-tailed geckos and leopard geckos have a similar build and look alike, they aren’t the same size! 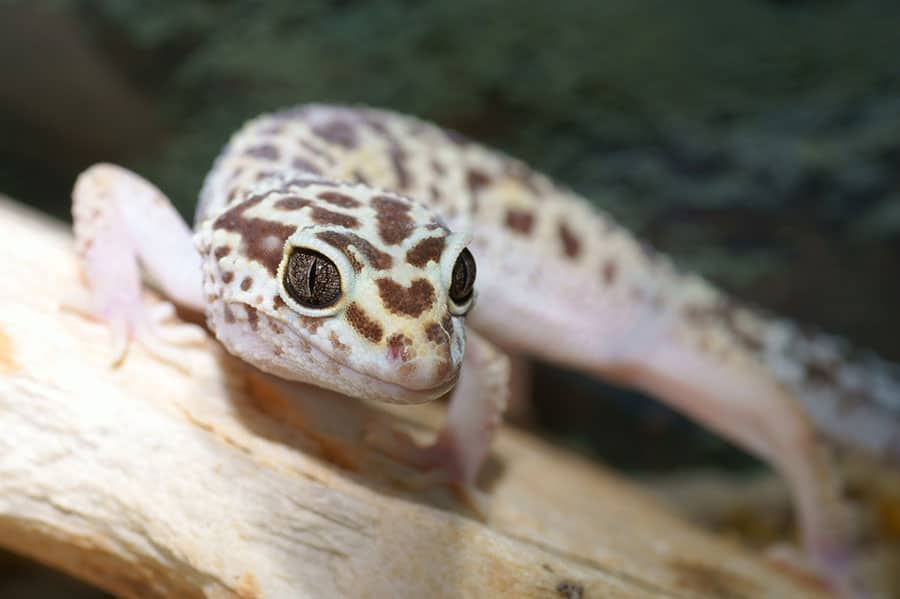 African fat-tailed geckos, on the other hand, are smaller with stockier bodies, bigger eyes, and smaller feet. Adults tend to be from 6 to 8 inches long and weigh around 45 to 75 grams. They have short and fat tails, hence the name, “fat-tailed” geckos. 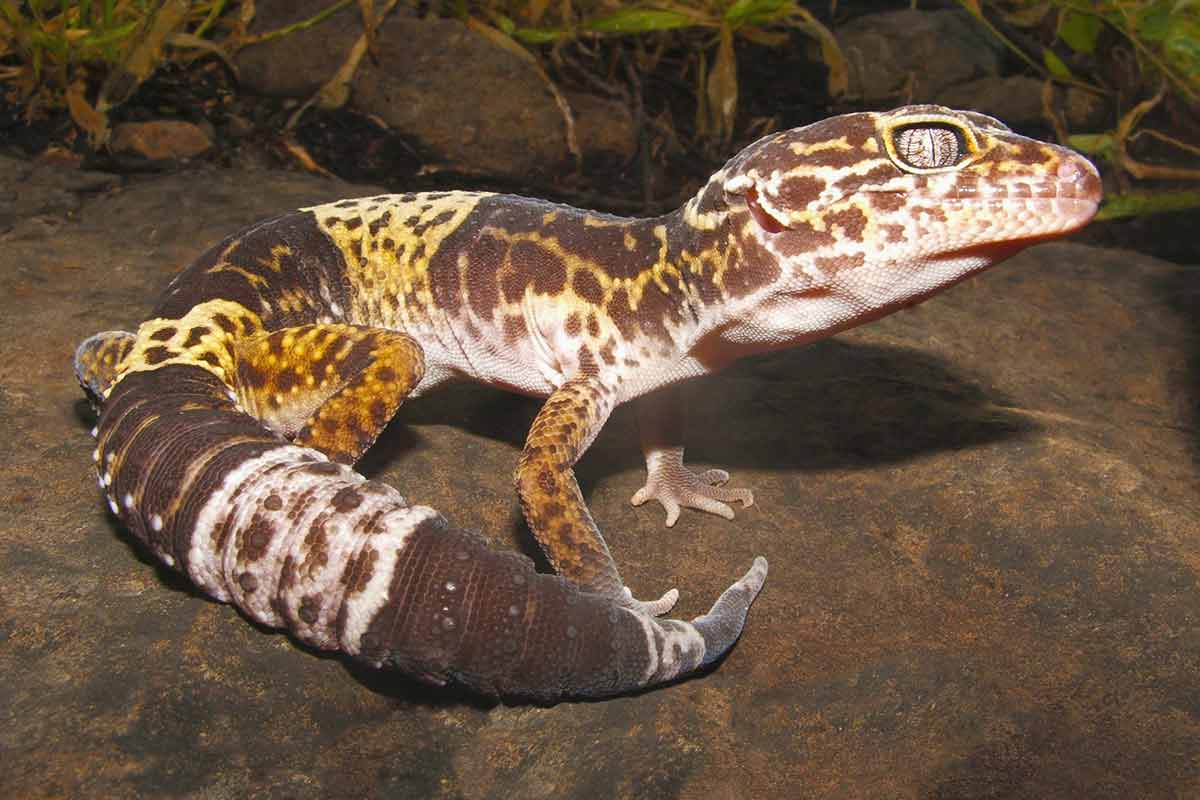 If you want a larger, longer gecko, opt for a leopard gecko; for a smaller, more stocky gecko, the African fat tail is your guy.

Temperament and personality are important factors to consider when choosing a pet reptile. Some lizard species are easy to handle and welcome your touch, while others may be territorial and even attempt to bite you whenever you get close! If you plan to interact with your scaly pet and feed it from hand, you’ll be interested to find how leos and fat tails compare in terms of temperament.

African fat-tailed geckos are generally calm, docile, and gentle, though they are a bit skittish at first. As babies and juveniles, these geckos are more likely to get scared and may drop their tails if they feel threatened.

As adults, fat-tailed geckos can be quite territorial and are likely to snap at you when you invade their personal space. If you insist on picking up or handling them, you may even end up bitten, though this isn’t a common occurrence.

Leopard geckos, on the other hand, are well-known and beloved for their friendly, calm, curious, and lively temperaments. They are one of the best pet lizards for handling and generally don’t mind being picked up or eating from your hand.

Babies and juveniles may need some time to become comfortable around you, but once they do, they won’t hesitate to walk right into your hand.

Leopard geckos are more fun to hang out with.

The variety of colors and patterns these small reptiles can have make them very exciting and interesting to beginner reptile enthusiasts and seasoned owners alike. Having a uniquely colored morph might be high on your priority list when choosing a new pet gecko. With that in mind, let’s see how fat tails and leos compare in that department.

African fat-tailed geckos are born with either a banded or striped pattern and have a natural color base of beige or light brown. Bands or strips usually stretch down the length of the body, head, and tail and are usually brown in color. Most fat-tailed geckos have a white underbelly, and some may even have a white line running down their dorsal region.

As this species is gaining popularity, more African fat-tailed geckos are becoming available to prospective owners and enthusiasts. 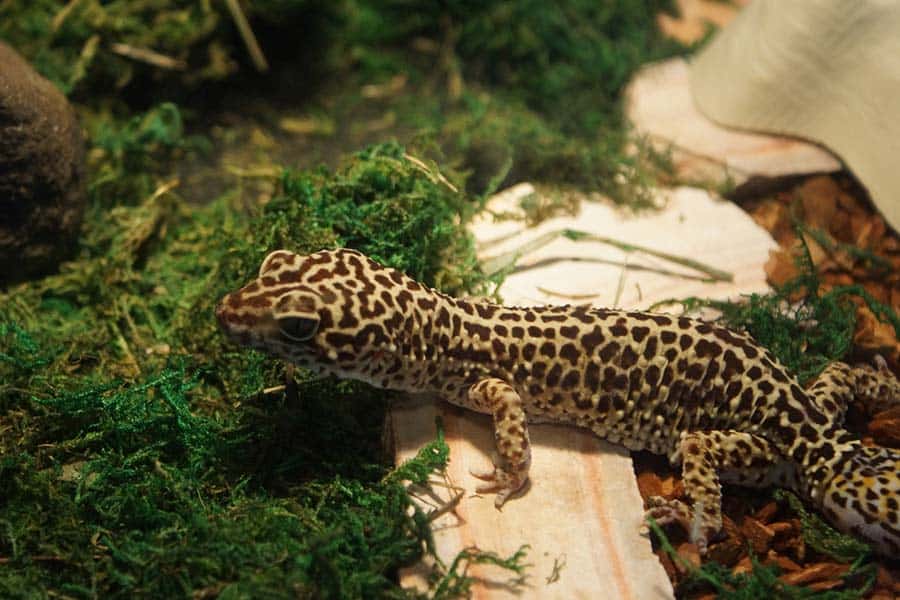 Alternatively, the leopard gecko has been a popular pet lizard for quite some time, and they have been selectively bred for many years. As a result, leopard geckos come in a multitude of colors, patterns, and there are many different morphs.

Some of these morphs have all-black or red eyes, which certainly increase their overall appeal. There are even giant morphs, melanistic morphs, and albino morphs, just to name a few. Having said that, leos are an extremely colorful species, and you are more likely to find one that suits your preferences.

When we’re talking about a wow factor, leopard geckos take the cake.

Both leopard geckos and fat-tailed geckos are insectivores that enjoy eating live insects. Overall, there’s not much of a difference between the African fat-tailed gecko and leopard gecko when it comes to diet. Both should have a varied diet that consists of crickets, mealworms, and dubia roaches as staples and fatty worms like waxworms as treats.

While both species are relatively easy to care for, they come from different climates and have distinctive husbandry requirements.

Originally from more humid areas of Western Africa, African fat-tailed geckos need high humidity levels inside their enclosure to stay healthy. Keeping this gecko in a low humidity habitat can lead to an array of health problems. The humidity range inside their enclosure is best achieved by misting and needs to be around 70% to 80%, while the temperature needs to be around 86 to 88 degrees Fahrenheit.

Leopard geckos, on the other hand, come from the arid areas of the Middle East, and they need a moderate humidity range of around 30% to 40% to stay healthy and thrive. As a desert-dwelling species, leos need higher temperatures and a gradual temperature gradient inside their habitats. Their daytime basking area should be between 88 and 90 degrees Fahrenheit, and the cold side of their enclosure should be kept at around 75 to 80 degrees Fahrenheit.

When it comes to tank size, a 10-gallon tank is a minimum for babies and juveniles, while adult leos and fat-tailed geckos need at least a 20-gallon terrarium. When it comes to their enclosure, bigger is always better as far as both species are concerned.

Overall, leopard geckos are easier to take of.

Which Gecko Species Is Right for You?

When it comes to African fat-tailed geckos vs leopard geckos, the leo is easier to care for and is better suited to newbie owners. Don’t get me wrong; both species make excellent pets suitable for novice lizard lovers, and you can’t go wrong by choosing either one.

African fat-tailed geckos require high humidity levels inside their enclosures and a lower temperature range than leopard geckos. Leos, however, are desert-dwelling lizards that need a thermal gradient and a warm basking spot to stay healthy and happy.

Leopard geckos are also friendlier and more curious than fat-tailed geckos, and they are consequently more fun to observe and interact with.