Nobody likes poop, even if it’s your human baby’s, your pet’s, or your own. However, as a reptile parent, poop is going to be on your mind–a lot. Why? Bearded dragons are quieter and more docile than many popular pets, so it can be hard to tell how they’re feeling just by their behavior. Their poop is the first way you’ll know they’re not okay.

How often do bearded dragons poop? This depends on a few factors that include:

On average, a baby bearded dragon poops every day. They can go potty as much as three times a day thanks to their fast metabolisms at such a young age. If they’re pooping more than that, you might be overfeeding them. Check their size against a beardie growth chart to see if they’re getting too fat or growing too quickly.

Juvenile bearded dragons should poop every day as well, but once is enough during this stage as their metabolisms begin to slow down. Depending on how much you feed them, they can safely go a day or two without pooping, so you shouldn’t be worried until they haven’t produced a bowel movement in four or five days.

Once your beardie hits adulthood (12 months and older), the frequency of their bowel movements reduces a lot. An adult bearded dragon will usually poop every one to three days, and some can go up to a week without pooping. They’re mostly eating plant matter at this point and have reached their full size, so they’re not producing as much body waste.

So, what does “normal” bearded dragon poop look like? How should you monitor their bowel movements? What if your beardie isn’t pooping normally? Keep reading to learn more.

How Often Should Bearded Dragons Poop? Tips on Potty Tracking 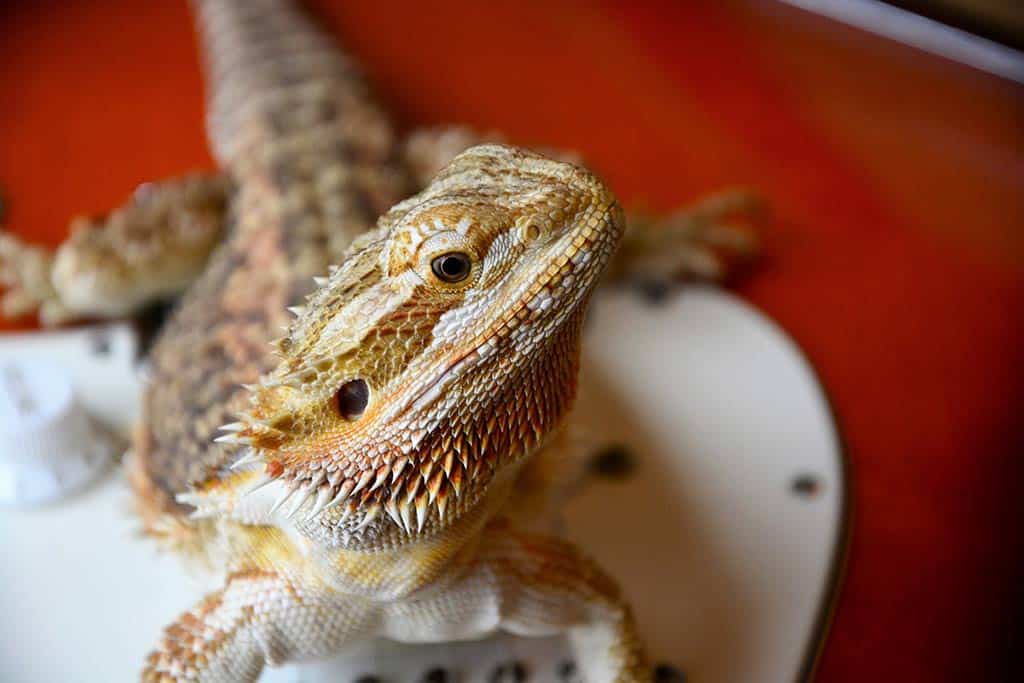 From the day you bring your bearded dragon home, train yourself to keep a poop journal. It doesn’t need to be complicated. It could be a quick list in a notebook, a whiteboard chart in your reptile room, or an app on your smartphone.

Your bearded dragon poop diary should contain the following information:

This seems like a lot of work, but it gets easier once it becomes a habit. You may eventually find yourself doing it without even thinking. Also, take a whiff of the beardie themselves, the tank, and where they hang out. Bearded dragons have a unique musk on their bodies.

If you don’t know their natural smell, you can’t tell when something is wrong. You also need to recognize the ‘normal’ range of scents in their poop. This can help with troubleshooting. A drastic shift in your beardie’s tank smell could indicate parasites, dietary changes, or illness.

Factors That Can Affect Your Dragon’s Poop Schedule

Once you notice your bearded dragon isn’t pooping on schedule, you’ll need to find out why. Otherwise, you won’t know what needs fixing. Here are a few things that could be backing up your bearded baby, along with some tips to solve the issue:

Check that the tank isn’t too open, and that there isn’t much human traffic in the reptile room. Even humans hate peeing while people are waiting and watching. Offer hiding spots in the vivarium so your bearded dragon has a private potty place. Leave the lights off after dark, or use a night light. You could also try relocating their enclosure to a quieter, less chaotic location.

Stress from Changes in the Environment

Any changes in your scale baby’s surroundings could affect their appetite and bowel movements. This could mean a new baby in the house, a new pet, or a home reno. Try giving your beardie some extra one-on-one time if there’s a guest or a new family member.

If your reptile room is near a noisy area of the home or yard or there’s a loud renovation nearby, move your beardie to a quieter part of the house. You could also consider DIY soundproofing their tank.

Try increasing your feedings. Your dragon should still eat in 10-minute spurts, but add one or two feeding sessions a day and observe your bearded baby. You can increase the sessions as needed, but offer roughly the same amount of food each time they eat.

Remember to mist your beardie with clean, fresh water at every meal, but don’t make the tank too humid, as excess humidity can cause respiratory infections. Provide them with a small bowl of fresh water at all times so they can also drink when they feel like it.

Bearded dragons require UVB rays to properly absorb calcium and digest their food. In fact, low temperatures and lack of UVB lighting are the biggest causes of impaction, though it’s often wrongly blamed on substrate or food choice.

Low temps can also trigger brumation. Use a heat gun or a thermometer to monitor the temperature of your beardie’s basking spot. To facilitate digestion and subsequent pooping, it should be 95°F to 110°F at most. Don’t feed your beardie at night or too close to bedtime, because the lights will be off and they can’t digest in the dark.

If your beardie doesn’t like their new menu, they won’t eat, which means they won’t poop.

Always introduce new foods into their diet gradually; just one or two pieces mixed into their regular food at a time is ideal. Increase the new food little by little until you have fully integrated it into their usual diet. 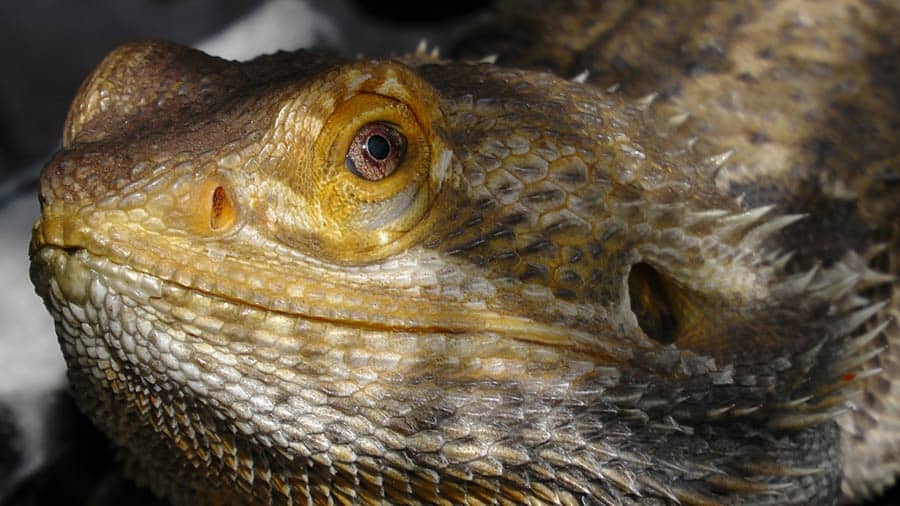 Tips to Get Your Bearded Dragon Pooping

While the typical pooping frequency is once a day for beardie babies and a few times per week for adult bearded dragons, your beardie poop diary will give a detailed schedule for your scale baby. This way, you’ll know when they’ve gone too long without emptying their bowels. Here’s what you can do to help the process along:

If none of this works, your vet might prescribe a medical laxative, an enema, or a saline rinse. These could cost a lot, so if you haven’t already, consider getting pet insurance for your scale baby. There are policies that cover vet fees and others that include injury, illness, or demise.

Humans don’t generally spend much time studying poop. You may notice your human infant’s poop while changing diapers, but that stops soon after your toddler is potty trained. Keeping an eye on your beardie’s poop is something you have to consciously learn.

Your focus should be on what poop is safe and what poop is worrisome. Healthy bearded dragon poop has two portions – a solid stool from digested food and a softer section that’s mostly uric acid. These two come out at the same time, with the urate coming out towards the end.

So essentially, your bearded dragon’s poop – on a good day – could have several mini logs or a longer tube with white fluff at the back. Sometimes, there might be clear water around the poop that looks like pee. If it’s clear, that’s fine; it’s just excess water from the beardie’s body.

Good, healthy poop is firm but not rock hard. If it’s too hard, it may graze your scale baby’s cloaca on the way out. This sometimes causes bloody streaks on the beardie’s poop or in the urate. Impaction – which is bearded dragon constipation – can also cause bloody bits of stool.

Poop color ranges from green to brown depending on what your beardie is eating. Older beardies may have greener poop, since 80% of their diet is plant matter. Their poop could also be pink if they’re eating reddish foods or even orange when they eat pumpkins or squash.

Healthy beardie poop shouldn’t have bits of undigested food in it. If that happens, you could add fibrous plant matter to help push the food through your bearded dragon’s digestive tract. If you’ve recently fed them something new, change their diet back and try smaller portions later.

When vent grazes are mild, they could leave your scale baby susceptible to infections. But if the damage is worse, your dragon may need to see a vet. To avoid beardie stool that’s too hard, mist your beardie’s nose several times a day and watch them as they lick it off.

Hydration will help moisten their stools. You can also hydrate your bearded baby with baths or mist their veggies as they eat. 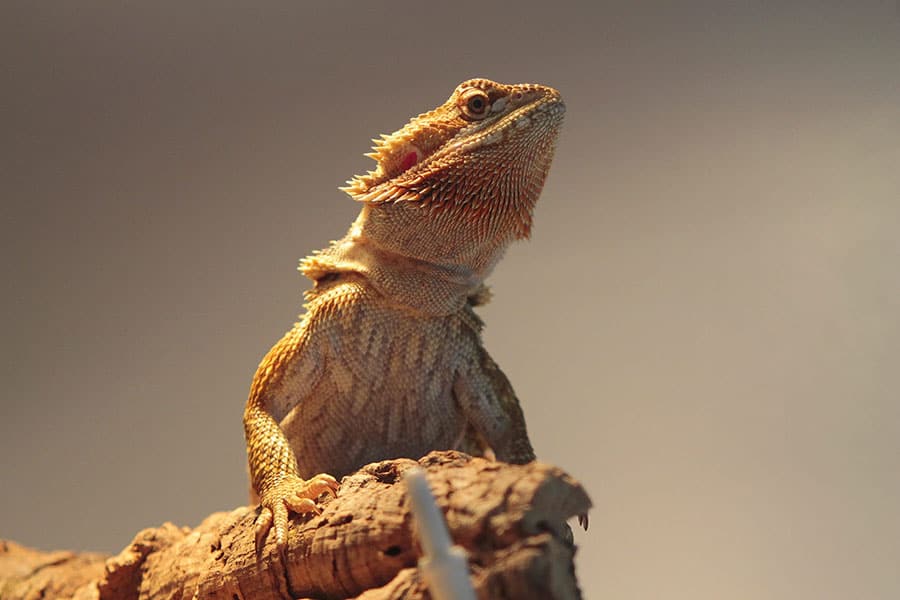 To recap, this is what healthy poop looks like: firm tube-like logs with white blobs of urate at the tip

Here are things look out for in your scale baby’s potty and what they might mean:

Other signs your beardie is in distress include lethargy, refusing to eat, drastic weight loss, or mucus in their poop. Also, you should smell the enclosure from time to time. This gets you familiar with its normal smells so you can tell if the poop, habitat, or your dragon’s aroma is off.

How many times do bearded dragons poop per day?

This depends on your beardie’s age, how often you feed them, and what kind of food they’re eating. Insect protein is digested slower and more thoroughly than plant material.

So, in the early days when your beardie is eating a lot of insect protein, their poop volumes are lower, but they’re more frequently spaced out. Plus, since they’re babies with small bladders and immature reproductive tracts, they need to poop more often than juveniles or adults. They can go as many as three or four times a day!

Some adult beardies still poop daily, but they can often go two or three days without producing a bowel movement.

How do I know my bearded dragon isn’t pooping?

If you’re using solid substrate like reptile carpet, a rug, or tile, you can easily spot the poop as it happens, and you probably will clean that poop as often as every day.

However, if you’re using loose substrate, it’s not as easy to tell unless you catch them in the act. In such cases, check for burrowing. Beardies often bury their poop in the wild to prevent predators from tracking them. If your beardie is digging through their loose substrate, they may have just pooped. Take a whiff and note it in your log or diary.

Can I potty train my bearded dragon?

Yes, you can, to an extent. And it’s a good idea, because beardies are social creatures. They love spending time with you and other pets, too. It helps if they have a designated washroom for the times they’re outside their tank and hanging out with you.

And even in the tank, if they have a regular pooping spot, it can be easier to maintain. This is especially helpful if you’re using loose substrates, as you’ll be able to just scoop any poop out with a litter scoop.

A young bearded dragon (up to 12 months) should poop once or twice a day, while adults go a few times per week. In a healthy beardie, their poop and the urate come out at the same time, but the consistencies of their urine and feces are different.

When everything is good, normal bearded dragon poop should be brown or greenish. The ‘poop’ part is like a lumpy, disjointed log, while the white or yellow urate is softer, creamier, and comes at the…tail-end, pun intended.