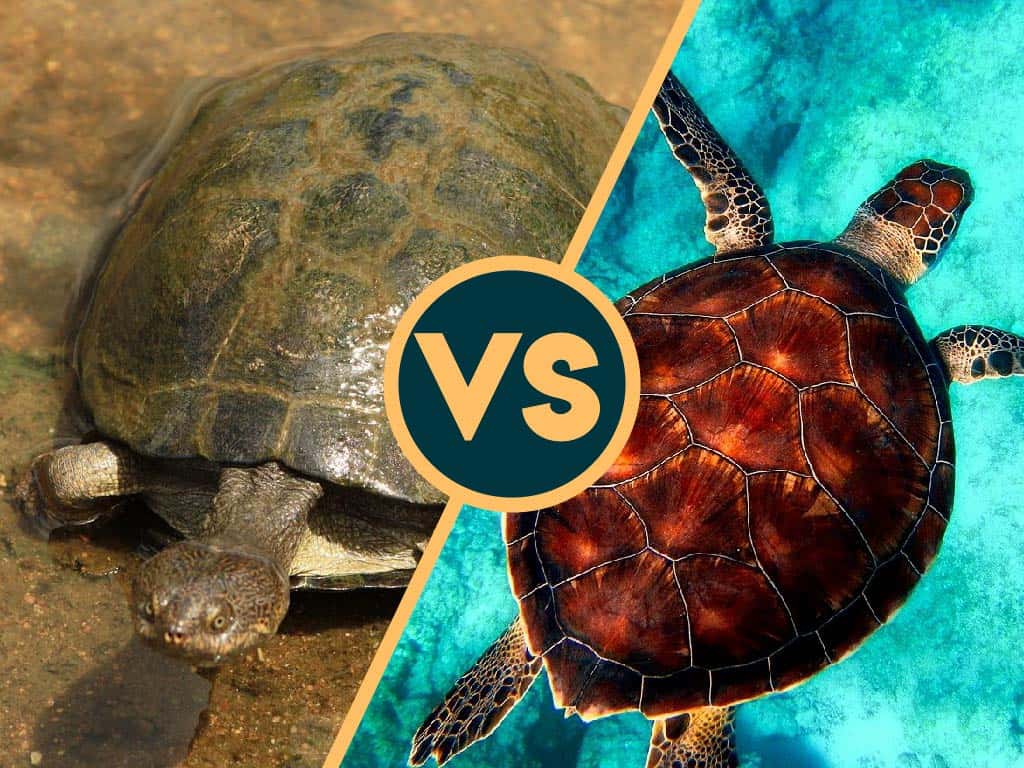 What is the main difference between terrapins vs turtles? The terms are often used interchangeably, but they do have some differences.

Turtles and terrapins are very similar in terms of their biology. They both belong to the chelonian group of reptiles. Chelonians consist of all reptiles that have an external shell. This group includes all turtles, tortoises, and terrapins.

Scientifically, all tortoises and terrapins are actually turtles! The distinction between the three subgroups of chelonians comes in when you consider the environment they live in. Turtles are land-based, terrapins are semi-aquatic, and turtles are completely or nearly completely aquatic.

Apart from the environments they live in, there are very few physical differences between terrapins and turtles. Their physical form is similar except for their limbs (and the addition of claws on some terrapins).

Read on to see exactly what the difference is between turtles vs terrapins and which would make the best pet for you!

Main Differences Between Terrapins vs Turtles

The main differences between terrapins vs turtles are:

The term “turtle” actually refers to the entire group of chelonians, or shelled reptiles. This means regardless of what shelled reptile you are looking at, they are technically all, in fact, turtles!

However, to call a tortoise or a terrapin a turtle can become a bit confusing. The terms “tortoise” and “terrapin” are used to describe turtles that have adapted to different environments!

Terrapins are often much smaller than most turtles we think of; however, this is not the defining factor when considering the difference between turtles and terrapins, because there are very small turtles out there, too!

What’s in a Name?

When we talk about etymology and the naming of animals, we need to consider why animals get their names, where their names come from, and any additional meanings their names can have.

The Naming of Terrapins

The term “terrapin” is actually derived from the Algonquian (Native American language) word for torope, which means “little turtle.” The term torope originally was only used to refer to the Malaclemys terrapin, more commonly known as the diamondback terrapin.

Interestingly, the term “terrapin” is not used much in the US anymore, and the word “slider” has come to replace it for most terrapins such as the red-eared slider and the yellow-bellied slider. However, the diamondback terrapin has retained its name.

In other parts of the world, the term “terrapin” is used for any chelonian that lives in fresh or brackish water.

The Naming of Turtles

Why Do These Names’ Differences Matter?

Ironically, if you were to call a terrapin a turtle, you would not be wrong, but you may be looked at a little funny!

“Terrapin” or “slider” is not a cut and dry term, as alligator snapping turtles and common snapping turtles live in fresh and brackish water but are called turtles! It can be frustrating to try and determine which name belongs to what chelonian.

Hopefully, some of the following differences can shed some more light…

The environment where an animal lives is important to consider, especially if you want to keep them as a pet. This is because you will need to replicate their natural environment as closely as possible to ensure they are happy and, more importantly, healthy for their entire lifespan.

Where Do Terrapins Live? 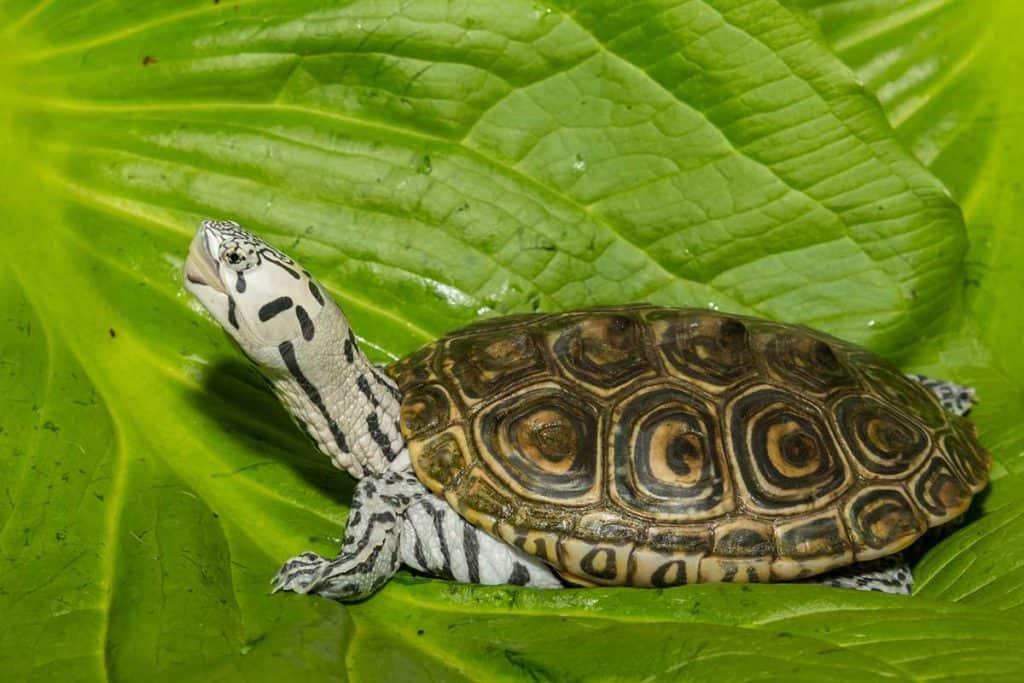 You can find terrapins in bodies of fresh and brackish water like ponds, rivers, and lakes.

Where Do Turtles Live? 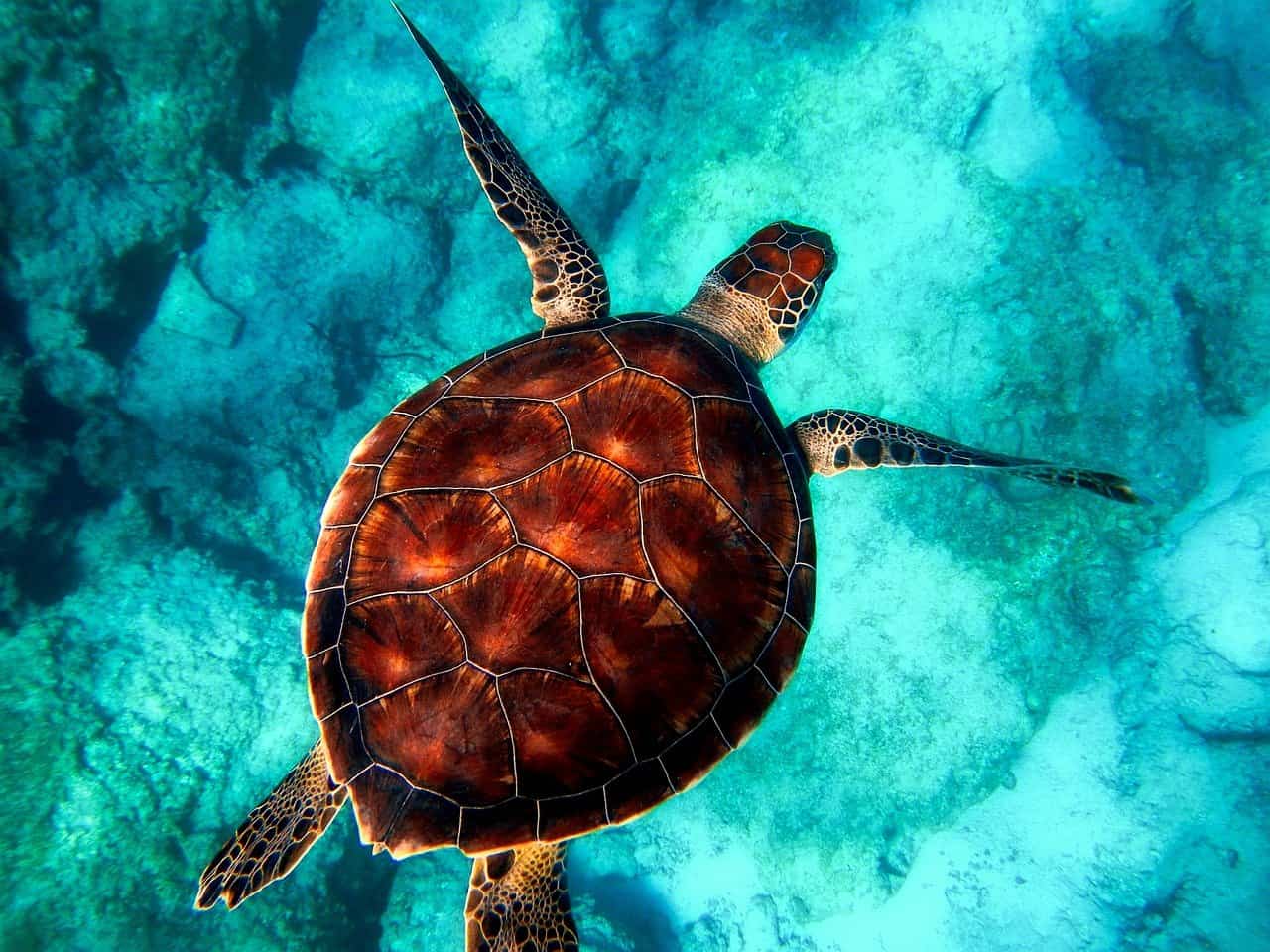 Turtles generally live in the ocean. They need the high salinity of the water to survive. Turtles live all over the world in various seas and oceans. However, they are more commonly found in warmer currents rather than cooler currents.

Does Their Environment Make a Difference?

These animals’ native habitats matter if you are deciding to keep a turtle or terrapin as a pet. Oceanic turtles need very large tanks with high salinity. Keeping a saltwater tank for turtles is fairly difficult and should not be attempted by anyone except for highly experienced aquatic pet owners.

Terrapins, on the other hand, can easily be kept by beginners because their tanks are much easier to set up! Freshwater tanks are also easier to manage in the long term.

Of all of the chelonians, tortoises are the only ones that are completely terrestrial; they cannot swim and can even drown if their water bowls are too deep.

Terrapins and turtles, on the other hand are well-adapted to live in aquatic environments. They are able to hold their breath for a long time, swim against strong currents, and hunt underwater. They are also omnivorous rather than herbivorous like tortoises.

How Much Water Do Terrapins Need?

Terrapins are semi-aquatic. This means they spend most of their lives in water. However, they do come out of the water from time to time for several reasons.

They often live in small bodies of water ponds, pans, and rivers, which can dry up depending on the season. They need to be able to move from one water source to another in order to survive.

Additionally, terrapins need to be able to dry their shells out and bask in the sun to regulate their body temperature and metabolism. Doing this from a cold pond is difficult, but thankfully, they have strong legs and claws and can crawl onto logs, other animals such as alligators and hippos, and rocks to sun themselves.

How Much Water Do Turtles Need?

Turtles are either nearly or completely aquatic. They live, eat, hunt, mate, and move through the water for the full duration of their lives. The only time they come out of the water is when females need to lay a clutch of eggs on a beach or in a bank.

If a turtle is out of the water or too long, they will become dehydrated and die.

Does Their Water Tolerance Make a Difference?

Whether an animal is semi-aquatic or fully aquatic will determine their type of setup you provide them within their tank. Turtles do not require any terrestrial area in their tanks, whereas terrapins need a basking ledge or rock formation to dry themselves out on.

Though they look fairly similar at a glance, there are a few key physical differences to keep in mind when looking at turtles and terrapins to help you determine which is which. 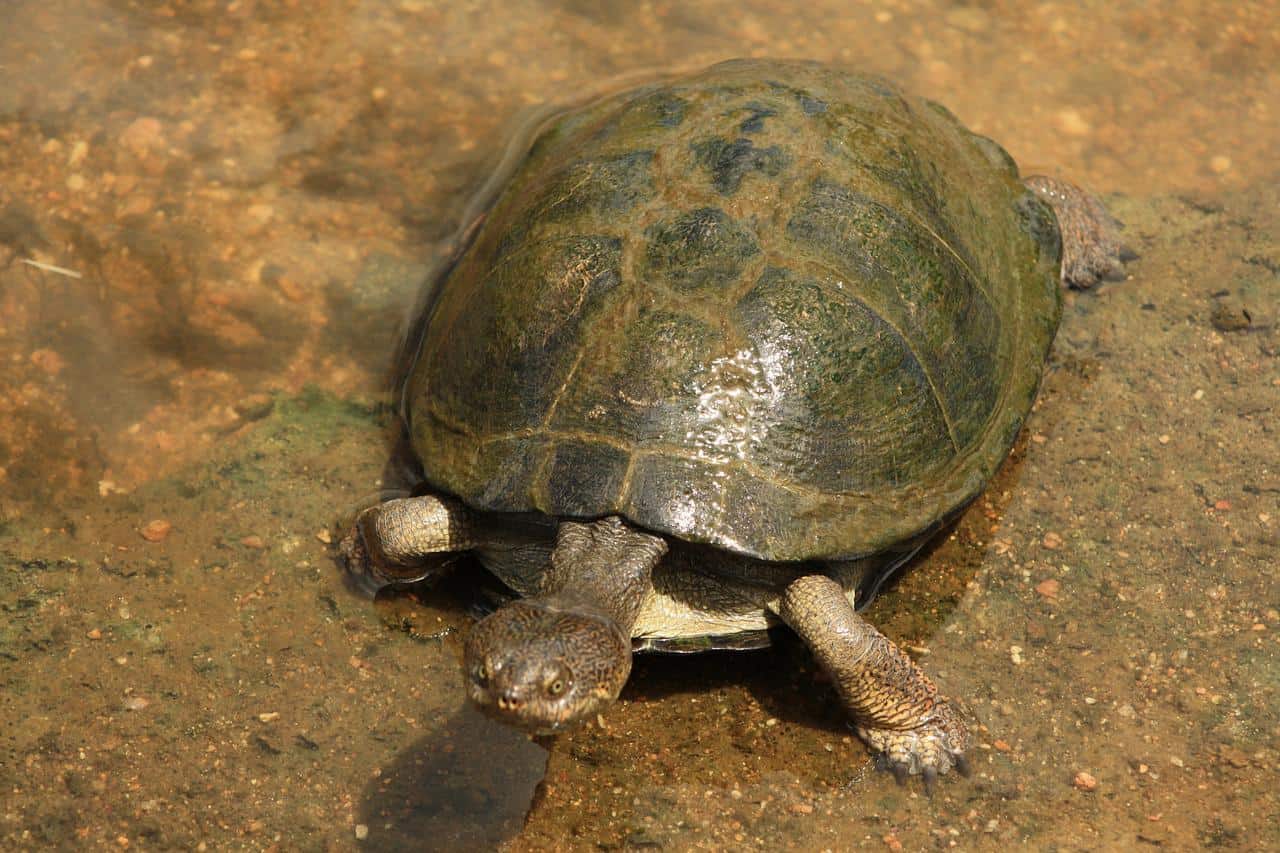 Terrapins are typically smaller than turtles and usually measure at 7 to 16 inches in total.

They have short, stubby legs that are slightly flattened. The flattening of their legs helps them to swim underwater and paddle along the surface. At the end of their forelegs, their feet are tipped with claws.

These claws are normally very long and very sharp. Terrapins use these claws to find purchase and pull themselves up onto logs, rocks, banks, or even other animals in order to sun themselves, dry out, and warm up. 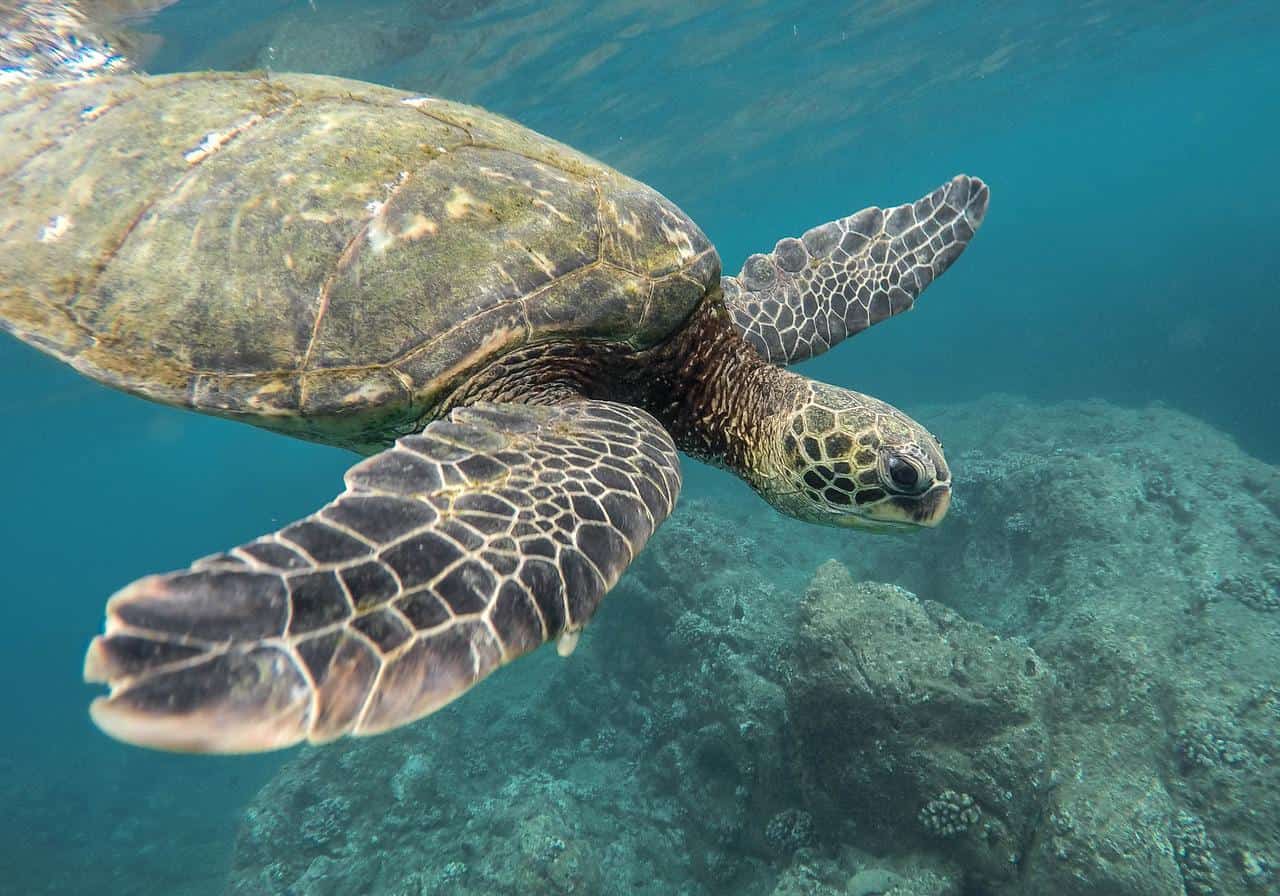 Turtles can be small, but most adult species are very large. They have long, flat flippers at the front of their bodies and shorter flippers at the back. These flippers are incredibly powerful, and turtles use them to propel their large bodies through the water.

Differentiating Between Turtles and Terrapins

If you can see claws, you’re likely looking at a terrapin. Turtles, on the other hand, have long flipper-like limbs rather than clawed feet. Additionally, turtles are generally larger, while terrapins usually max out at 15 inches or so in length.

If you can’t see their legs, it can be more difficult to tell the difference between the two, unless you know the defining characteristics of the species such as the red markings on a red-eared slider.

Terrapins vs Turtles: Is One Better Than the Other?

Turles, terrapins, and sliders, oh my! Let’s recap the main differences between terrapins and turtles so you can make an informed decision if you are deciding on buying one (or you can at least get that question right on your next trivia quiz night)!

The term “turtle” refers to chelonians, or all animals within the Chelonia order. However, they are colloquially simply known as the shelled reptiles that live in the ocean and in salt water. Terrapins or sliders are smaller than oceanic turtles and live in fresh or brackish water.

Turtles are completely aquatic and only struggle up onto land when they need to lay their eggs on beaches. Terrapins, on the other hand, are semi-aquatic and come out of the water regularly to move between water sources or to bask on rocks or logs.

Turtles are suited to battling the strong ocean currents and have flat flippers to propel them through the water. Terrapins, by comparison, have shorter, flattened legs that are tipped with claws, which they use to grip rocks and logs.

FAQs About Terrapins vs Turtles

Can I keep turtles and terrapins in the same tank?

What is the best turtle to have as a pet?

Sliders or terrapins are ultimately easier to keep than oceanic turtles because of the size of the enclosure required and the level of expertise required to take care of them. Terrapins are much easier to care for as their tank size usually stays below 200 gallons.

Have a look at our dedicated article on the top 10 turtles or terrapins that you can own!

Terrapins live in freshwater and brackish water, whereas turtles live in salty water in the ocean. However, keep in mind there is still much debate surrounding what a terrapin and a turtle are because the naming convention is not standardized all over the world.