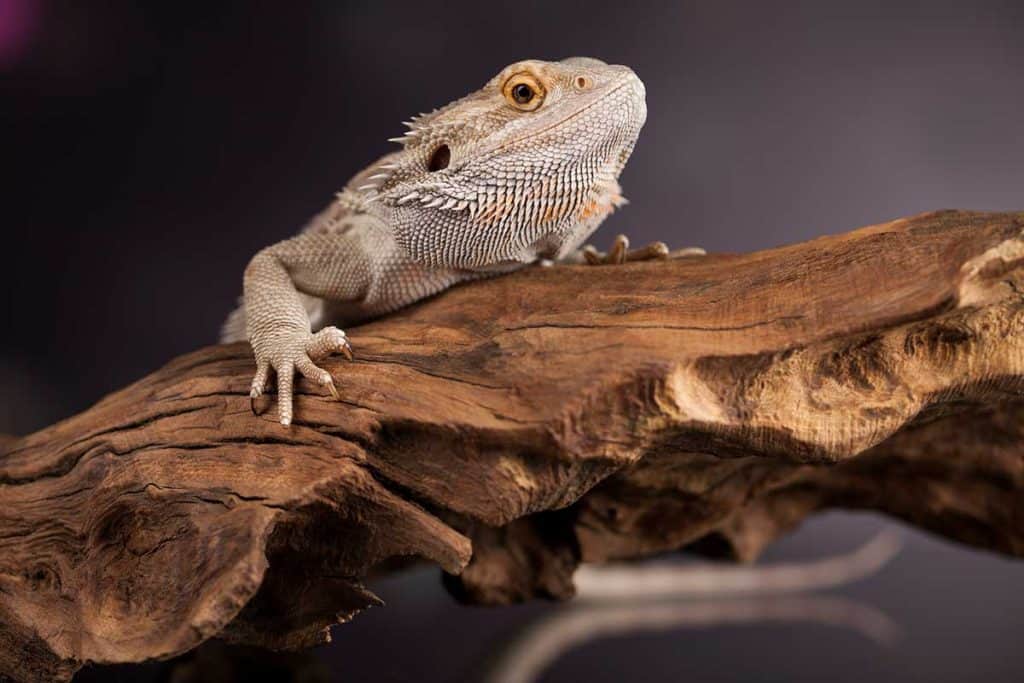 Bearded dragons are among the most popular reptile pets in the United States. They are cute little dragons with surprisingly docile and cuddly personalities, and they are relatively easy to look after even if you aren’t experienced raising reptiles. But are bearded dragons venomous?

For many years, the accepted knowledge has been that bearded dragons aren’t venomous, but new studies have revealed these lizards do actually produce a mild venom. However, this venom poses no real danger to humans, and since bearded dragons don’t tend to bite, they still aren’t considered dangerous animals.

A bearded dragon is a lizard with little spines on their head, including under their chin, which appears like a beard. They also have the ability to puff up their chin, and these spikes, to make themselves look larger and more intimidating as an instinctual reaction to certain stimuli.

These reptiles are native to Australia and prefer warm and arid habitats such as deserts and subtropical woodlands. They are no longer exported from Australia due to bans, but there is a strong breeding community particularly in the United States for anyone who wants to buy one. American breeders have even developed beardies with some unusual colors, or “morphs,” via selective breeding that are not found in the wild.

You can read our step-by-step guide to breeding bearded dragons here.

When fully grown, these lizards usually measure between 18 and 22 inches from nose to tail and can weigh between 10 and 18 ounces. They have an average lifespan of between 8 and 15 years both in the wild and in captivity if they are properly cared for.

Bearded dragons are popular reptile pets not only because of their handsome good looks! They tend to be docile and adapt to handling better than many other reptiles. They are also relatively easy pets to care for. They are hardy omnivores that eat everything from flowers and fruits to insects and even other small lizards and rodents. 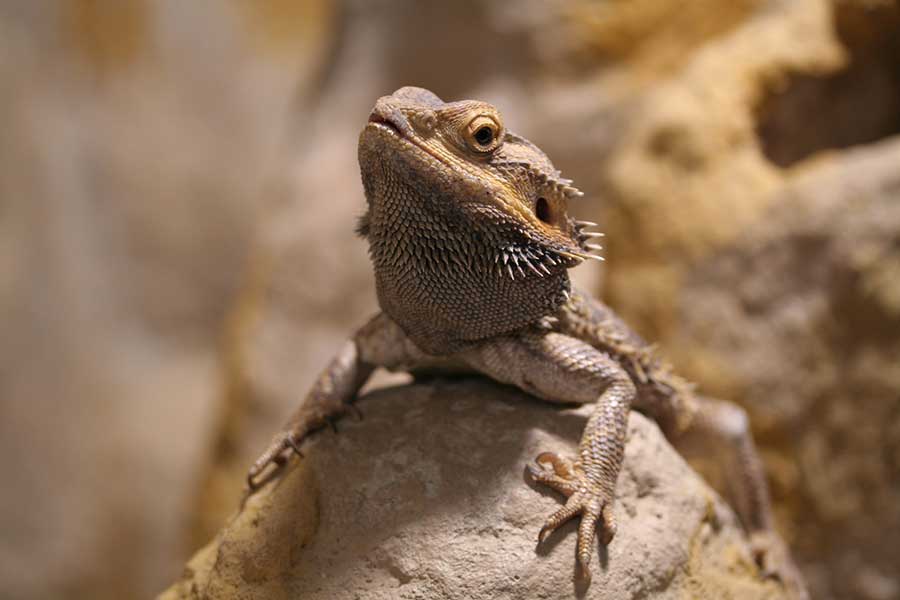 For many years, it was generally believed that bearded dragons were not poisonous. However, new tests conducted by Australian researchers and published in 2005 have shown that these lizards actually do carry a mild venom. They use this to incapacitate small animals that they intend to feed on.

The venom produced by bearded dragons is very similar to rattlesnake venom, and venom of the same family has been identified in a variety of other lizards, including the bearded dragon, Komodo dragon, Gila monster, Mexican beaded lizard, and some monitor lizards.

Most bearded dragons have a single venom gland in the mouth that produces the poison. But the eastern bearded dragon has two, in both the upper and lower jaws.

Fortunately, humans do not need to be too worried about this venom, as it is not seriously harmful to humans. A bite from a bearded dragon will certainly hurt, and it will swell up quickly and may even bleed. But these effects should be short, and there are no long-lasting or serious side effects to humans.

Still, if you have kittens, puppies, or other small animals in the house, it is a good idea to keep them away from your bearded dragon, as they may suffer negative side effects from the venom if they are bitten.

While the venom of a bearded dragon may not be dangerous to humans, does that mean they are safe?

In general, bearded dragons aren’t considered dangerous, and they are often recommended as reptile pets for children because they are docile and easy to care for.

These lizards have laid-back temperaments and will typically avoid fights and confrontations. They also easily grow accustomed to being handled and enjoy human interaction more than many other lizards.

It is important, though, to handle these lizards properly. Most reports of bites from bearded dragons come from them being handled excessively or roughly or being held too tightly. There is not much that these lizards can do to get out of these situations other than give you a little nip.

Be sure to teach any children in your home how to handle a bearded dragon properly with care and respect to avoid any unpleasant accidents.

It is also worth bearing in mind that the rough, spiny skin around the lizards’ sides and tail and their sharp claws can also cause injuries if mishandled. Be especially careful when handling these parts of the lizard.

Read our guide to trimming your bearded dragon’s nails here.

Wait, haven’t we already answered that question? Yes, bearded dragons are technically venomous, but their venom is not harmful to humans. But that is not the poison one should be most worried about when handling a beardie. Poison, after all, is a bit different from venom and must be transmitted by eating or touching a poisonous animal. 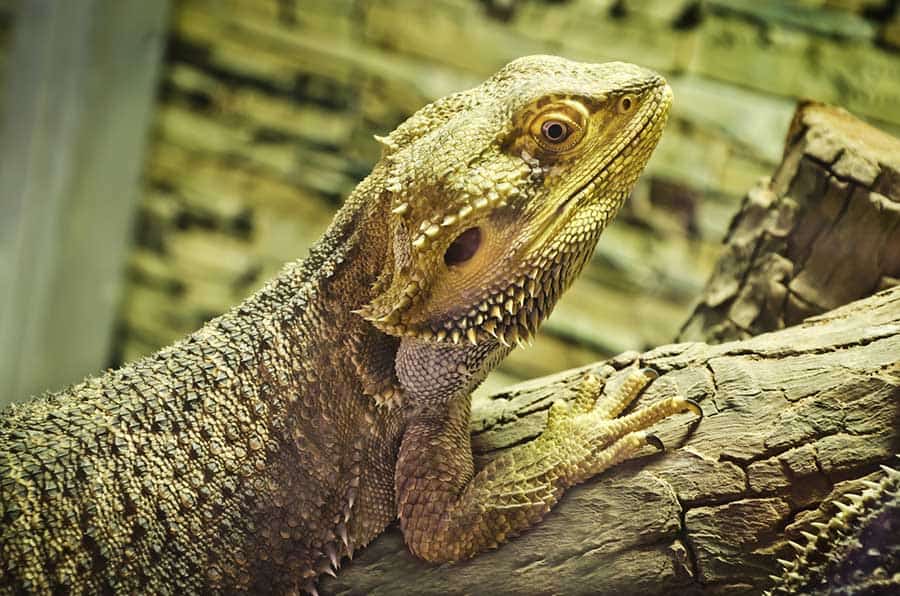 To be clear, these bearded dragons don’t carry any traditional poisons or toxins aside from their venom, which they must expel via a bite and is too weak to be harmful to humans anyway. Like most reptiles, though, they carry Salmonella.

They can transfer this bacteria through their bite, feces, and even their skin if you are especially unlucky. While the bacteria does nothing to the reptiles, if Salmonella gets in your system, it can cause serious gastrointestinal upset.

This is why it is important to always wash your hands thoroughly before and after handling a bearded lizard. This way, no residues on your hands will harm your reptile’s skin, and any bacteria they may be carrying won’t harm you, either.

It is similarly very important to teach children not to touch their bearded dragon, or any reptile such as lizards, snakes, and turtles, and then put their hands in or near their mouths. This is the fastest way to transmit Salmonella bacteria and end up with a seriously upset stomach.

What if a bearded dragon bites you?

While a bearded dragon bite is not venomous, it can look pretty ugly and possibly become infected, so keep it clean while it is healing. It will probably also hurt quite a bit!

Since they are normally very docile animals, consider what might have done to provoke them to lash out and bite to prevent something similar from happening in the future. Rough handling, sudden movements, and squeezing too tightly can all frighten a bearded dragon into potentially biting in self-defense.

Technically, the bite of a bearded dragon is venomous, not poisonous. Venom must be expelled via a bite or sting, while poison is typically secreted from the skin and must be touched or eaten to take effect.

Thankfully, bearded dragon venom is not potent enough to be toxic to humans. It is mild and designed to bring down small prey such as rodents and other lizards. Be sure to monitor your bearded dragon around any other small pets, and take them to the vet if they are bitten.

Bearded dragons are popular pets because they don’t just tolerate handling–they actually like it! However, it is crucial that you respect their comfort and are always careful about not squeezing them too hard or scaring them.

Can bearded dragons bite your finger off?

Bearded dragons do have a very strong bite, and in the right circumstances, they could take off a part of your finger. They will generally only bite if provoked.

However, if they do bite, then they are already scared. If you aggravate them further when bitten, for example, by shaking your hand or hitting them, they are likely to bite down harder. This is when serious injuries can happen.

Yes, bearded dragons are venomous, but you don’t really need to worry about getting sick from their bite. While the wound can hurt and look quite nasty, it will heal quickly, and there are no long-lasting side effects. Bearded dragon venom is very mild and does not affect humans.

However, because their venom is meant to take down small prey animals like rodents and insects, it could have adverse effects on small pets like kittens and puppies. Bear this in mind if you have any other small animals in the house.

Overall, bearded dragons are docile and unlikely to bite unprovoked. The main risk associated with these lizards (and most reptiles) is Salmonella. They carry the bacteria naturally, and it poses no risk to them, but it can cause serious gastrointestinal upset if transmitted to humans.

Thankfully, you can prevent the transmission of Salmonella bacteria by washing your hands well after handling your dragon. Salmonella can often be a big problem for kids, since they tend to put their hands in and around their mouths at any moment. As well as teaching your child to care for an animal, having a bearded dragon is a good opportunity to teach them good hygiene and how to respectfully handle their pet.

Do you have any top tips for caring for bearded dragons? Share them with the community in the comments section below.