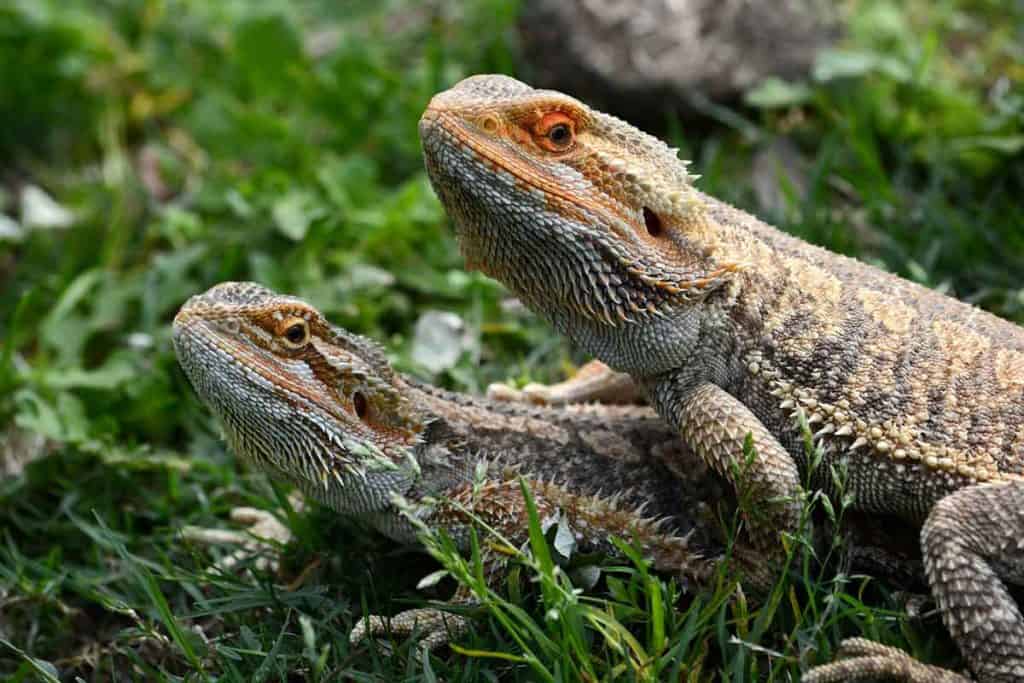 Because of beardies are adorable and are so popular as pets, many reptile lovers are enthusiastic about learning how to breed bearded dragons.

Breeding bearded dragons is slightly more difficult than just caring for them. However, with patience and good planning, breeding your favorite lizard is a piece of cake!

To breed safely, bearded dragons need to go through a sort of cycle. This cycle entails controlling the amount of light, heat, and food they get at different times of the year. As they have relatively short breeding cycles, they can be bred a couple of times each year.

Read on to find out step-by-step how to breed your bearded dragons!

How to Breed Bearded Dragons: The Steps

While many different breeders have their own methods that tweak the breeding cycle to fit their preferences and environments accordingly, these are the basic steps breeders typically follow. Once you have the steps down, you can start tweaking them according to your experiences.

To have a successful breeding pair, one bearded dragon needs to be male and the other female!

For starters, male bearded dragons have hemipenes, and females do not. Locate the cloaca or vent on your bearded dragon between its hind legs. A male will have two small bulges on either side of the cloaca, and a female will not.

If you gently hold your bearded dragon up in front of you and look at the region near the cloaca, along the hind legs, you will see large femoral and perianal pores on a male. On a female dragon, the pores will be much smaller and indistinct.

Male bearded dragons are also typically larger and heavier than females. They will also have darker and larger beards. This is difficult to see unless you place them side by side and compare them.

Check out our in-depth article on the differences between male and female bearded dragons. 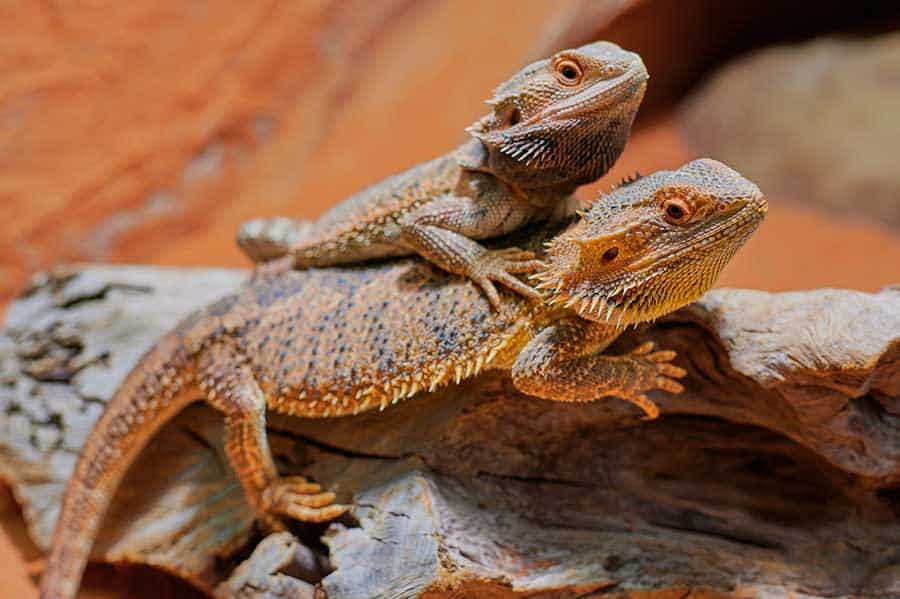 Breeding takes a lot of energy, specifically from female bearded dragons. Therefore, it is essential that you only start a breeding cycle with two bearded dragons that are in excellent health.

Underweight or obese bearded dragons have decreased chances of successfully mating. Therefore, you will need to monitor your bearded dragons’ nutrition very closely.

Your bearded dragons will need to undergo a period of brumation before mating. During this period, they should be offered less food than usual. Therefore, they need a healthy body weight in order to maintain their normal bodily processes during brumation.

Boost your female’s calcium intake for a week or two before brumation begins. She should get a calcium and vitamin D supplement daily. Producing eggs requires a lot of calcium, and this is taken directly from her bones! If she does not have enough calcium in her system, it will lead to a shortened lifespan or even metabolic bone disease.

Your bearded dragons will need to undergo a period of brumation. This period should be at least six weeks long but should ideally be two to three months. It signifies a natural winter in which bearded dragons would normally go somewhat dormant and prepare for spring, which is when they typically mate.

At the beginning of the brumation part of the cycle, you will gradually reduce the amount of daylight and heat that your bearded dragons get.

Bearded dragons’ normal photocycle should be 12/12, or 12 hours each of light and dark. You will need to w0rk this toward 8 hours of light to 16 hours of darkness. This simulates the lizards’ environment getting darker in wintertime.

Their overall temperature will need to be reduced, too. Their normal range sits between 90°F at their basking spot to 75°F on the cool end of the enclosure, with it dripping to 70°F at night with all of the lights switched off.

During brumation, you will need to gradually drop their temperatures until the cool end sits at 65°F and the warm end sits at 75°F.

After the appropriate amount of time, you will slowly raise the temperature and return the photocycle to normal.

The process needs to be done extremely slowly, as sharp changes in the environment can cause stress, unsuccessful mating and breeding, and even death.

Once the period of brumation is over, give each dragon a decent meal, and then place the female inside the male’s enclosure. Keep a careful eye out for any aggressive behavior.

Males and females exhibit different mating rituals to indicate their readiness for each other.

Males will stamp their feet to attract the female’s attention, puff up and darken their beards to indicate their virility, and then bob their heads to assert dominance.

If the female is receptive, she will arm wave to indicate her submission to the male.

The male will then chase her a bit, bite her on the back of the neck, and attempt to position himself on top of her to mate.

This part can be difficult to watch because it can look quite violent. The male will bite the female on the back of her head, and she may try to escape. If she wants nothing more than to get away that she is trying to climb the walls, then remove her and place her back in her enclosure and try again in a day or two.

For a detailed look at how bearded dragons get it on, have a look at our dedicated article!

Once you are sure mating has happened, you can separate the two bearded dragons permanently and prepare the female’s enclosure.

6. Waiting and Preparing for Eggs

The female will need to be attended to carefully during this stage. She will need a boost in nutrition in order for her to maintain her own body while developing the eggs inside of her. 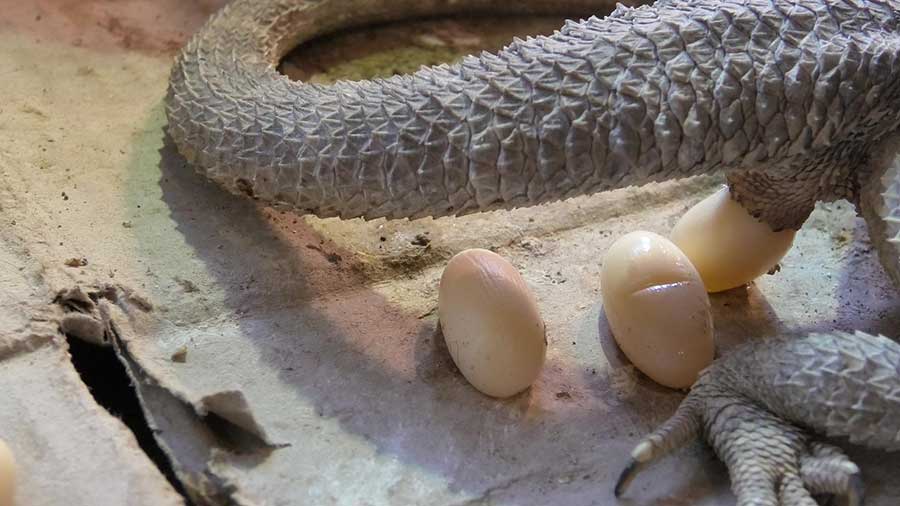 After a few weeks, her belly will start to round out. Eventually, you will be able to see the outline of each individual egg! Around this time, she will start trying to dig in the enclosure, and this is your cue to give her the egg box.

You need to prepare a breeding/egg/digging box for her. It should be a container that she can get into quite easily even with her gravid belly.

The box should be filled with soil. Using topsoil and perlite is a perfect substrate combination in this case. It holds moisture and its shape well when it is being dug up.

Introduce the female to the box and watch her explore it. She may dig up a couple of the corners before she decides which one she likes the best.

Your female will lay her eggs, cover them lightly with sand, and promptly forget about them. Once she has covered them with sand, you can treat her to a nice bath and a snack. While she is happy and de-stressing, remove the egg box from the enclosure.

If you come across eggs that are adhered together, it is best to leave them like that rather than pulling them apart, as this can damage the egg and the embryo.

Do I need a male bearded dragon in order for my female to produce eggs?

You do need a male and a female bearded dragon in order for fertilized eggs to be produced.

Bearded dragons cannot reproduce via parthenogenesis. If a female lays a clutch of eggs without the aid of a male, then the eggs will not be fertilized, and they will not develop into baby bearded dragons.

Can I keep my male and female together all year round to maximize breeding opportunities?

Bearded dragons are territorial creatures, and they live alone in the wild. They are not colony lizards. Therefore, keeping the male and female together all year can lead to problems, as one or the other (usually the female) ends up being stressed and suffering.

If the enclosure is large enough (at least 70 gallons), then the pair can be kept together a bit longer as long as they have enough hides, water sources, and food that they do not need to compete for resources.

At the Tail End of Things…

It is reasonably simple to know how to breed bearded dragons; the process on paper is straightforward. However, it takes a lot of determination and forethought from the owner to bring a mating cycle to success.

Breeding your bearded dragon means you will need to induce a period of brumation, or cooling, to trick their bodies into preparing for breeding. Once the brumation portion of the cycle is complete, you will move your dragons in together, and they will hopefully mate.

Good luck in your endeavor to bring new baby beardies into the world!