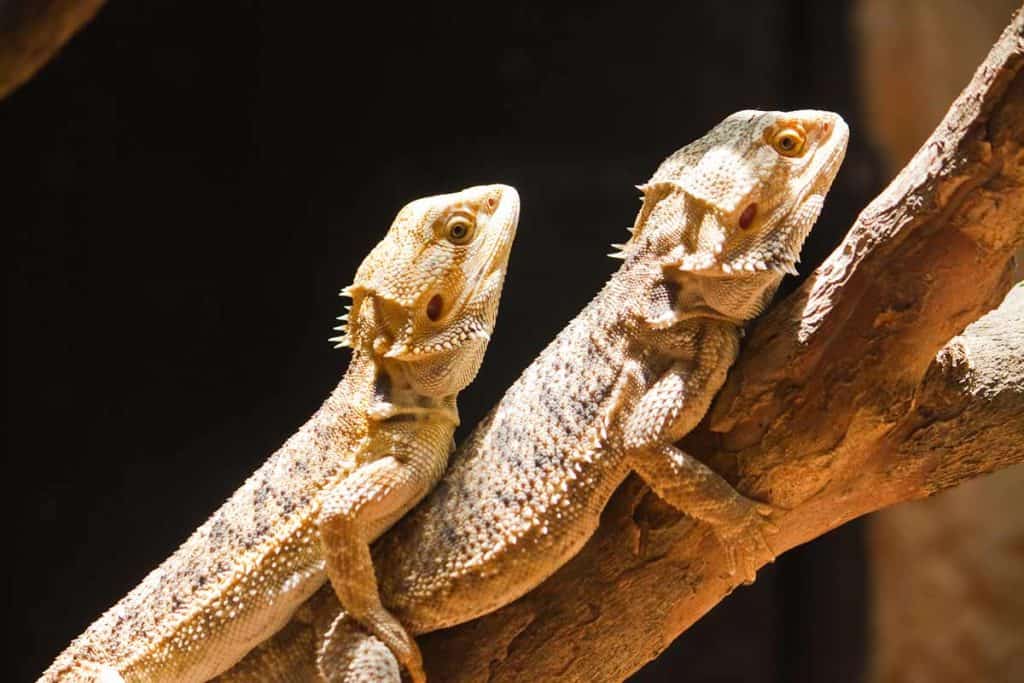 If you are wanting to breed your bearded dragons, then you will need to identify their mating rituals, body language, and behaviors in order to provide the optimal environment and husbandry conditions to make them comfortable enough to mate.

Mating behavior can seem quite violent to someone who is not used to seeing it! Being prepared for what can happen can alleviate your own stress as well as help you identify whether your bearded dragons are fighting or simply starting their mating rituals.

Read on for some top tips on how to breed your bearded dragons successfully!

Bearded dragon mating rituals are very visual. They will display many different types of body language to communicate with each other and convey their willingness and ability to mate and reproduce viable offspring.

Male bearded dragons have three main behavioral maneuvers they will often use to signal their readiness to mate to other female dragons.

All three behaviors usually happen together and not individually. If you see a male bobbing his head constantly without another bearded dragon in sight, then he may be trying to intimidate his own reflection!

If a female is receptive to a male dragon’s behavior, then she will bob her head in return and wave her arms at him.

However, if she is waving her arms and there is no male in sight, then there could be something else bothering her.

Check out our article on why bearded dragons wave their arms for a more in-depth look at this strange beardie behavior.

On the other hand, if a female is not receptive to the male’s behavior, then she will try to run away from him. If she cannot get away from him, she may try to escape the enclosure and can harm herself.

If you have males and females in the same enclosure, such as a breeding pair, be on the lookout for these behaviors, and step in if the female is trying to escape the male. Male and female dragons may occasionally need to be separated.

If you see males or females standing with their mouths open staring at each other, they are not being starstruck! Gaping is not a mating behavior but is instead done by bearded dragons to regulate their body temperature. For a more in-depth look at why bearded dragons open their mouths, read our dedicated article!

Essentially, gaping is an indication that your dragons are too hot and trying to cool down. If you want mating to happen successfully, then you will need to check on all of your enclosure settings, as something is likely amiss (most often temperature or humidity settings).

Love Is in the Air: When Dragons Want to Mate

If you have more than one bearded dragon enclosure and your beardies can see each other, then they may develop a crush or two!

Bearded dragons are very good at recognizing other bearded dragons. If they can see each other across a room or in adjacent enclosures, they can feel the urge to reproduce. 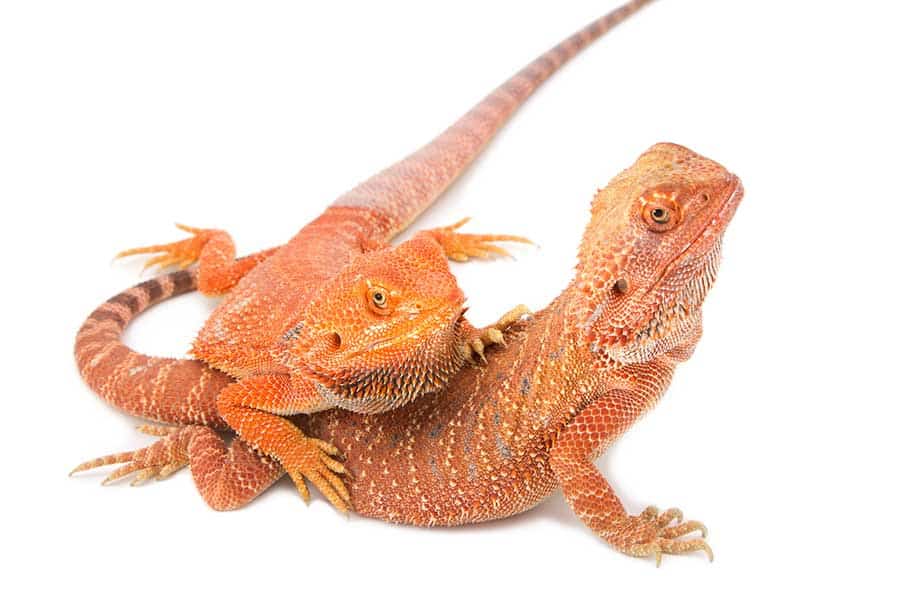 Males may display the aforementioned mating behaviors from across the room, and the females may respond!

If you notice these behaviors happening and you want to take a stab at breeding your bearded dragons, then this is the time to introduce the male to the female’s enclosure.

However, if you do not have the time, space, or finances to breed your beardies, incubate the eggs, and take care of the resulting offspring, then it would be a good idea to prevent your bearded dragons from seeing one another, as they may become frustrated and stressed out by each other’s prolonged presence with no physical contact.

Breeding bearded dragons is fairly simple, but their mating rituals are surprisingly complex!

Once the female has indicated that she is receptive to the male’s mating behavior, the male will try to mate with her. He may chase her around the enclosure a bit before biting her on the back of the neck.

This can look very aggressive and may alarm you, but it is usually normal. The key is to look at the female’s behavior when this happens. If she is desperately trying to climb the walls to get away and has not returned any of the mating signals, then it is best to remove her, as they may end up fighting.

Alternatively, if the female is struggling while the male bites her neck and tries to claw at him, it means she is not receptive, and you should separate them to avoid any damage.

Once the male and female are together, mating happens fairly quickly. The male will settle on one side of her tail, and one of his hemipenes will deposit the sperm into her cloaca to fertilize her eggs.

If the mating was a success, the female will lay her eggs in four to six weeks’ time.

Although bearded dragons breed easily in captivity, there are lots of tips you should keep in mind to make the process go as smoothly as possible. 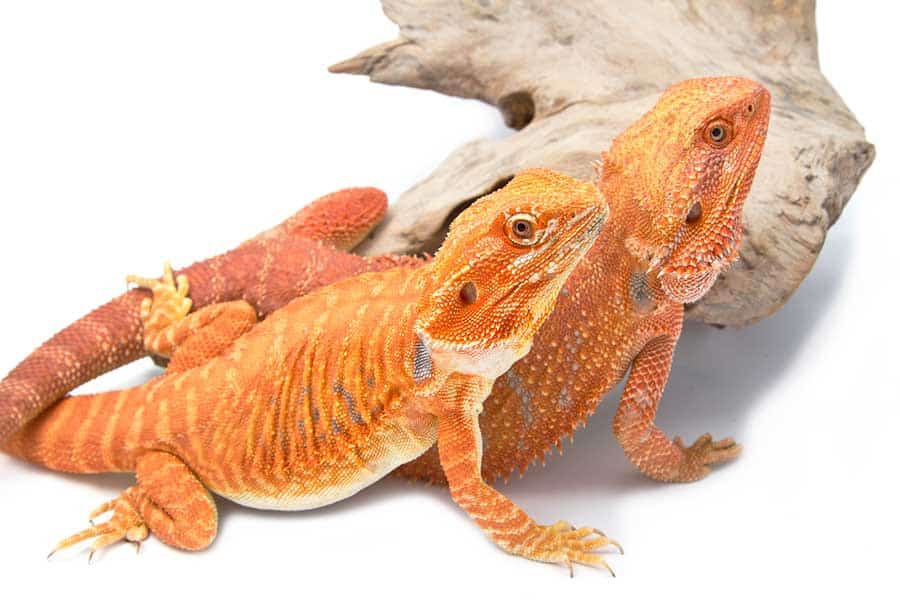 Breeding bearded dragons requires you to first identify which of your dragons are male and which are female! Check out our guide on how to sex your bearded dragons properly and safely! It would be a waste of time to find out a year after you have tried to mate your beardies a couple of times that they are both females!

Although beardies do not necessarily need a brumation period to successfully mate, brumation increases their fertility. For a closer look at what brumation is and how to facilitate it successfully, check out our guide dedicated to brumation in reptiles. Bearded dragons should be brumated for six to eight weeks before breeding is attempted.

Females should be over the age of 18 months and weigh at least 350 grams before breeding. This ensures that she is sexually mature and healthy enough to breed.

Your female beardie will also need to be in prime physical condition. You need to provide her with a diet that is high in calcium and other vital nutrients like vitamin D3. This is because producing eggs is a very physically taxing task that will use up a lot of her energy stores.

Your male beardie should be the about same size or weight as your female. This will ensure that your breeding pair are perfectly matched and the chance of rejection or bullying is reduced.

Is there a specific season that bearded dragons mate in?

There is no specific season that bearded dragons will mate. They can mate and produce eggs in any season.

However, they are most successful and will lay the largest clutches after a period of brumation or cooling. Therefore, they will mate more successfully during the spring and summer periods.

Do I need a license to breed bearded dragons in my state?

As bearded dragons are not a protected species, their breeding is not heavily regulated. Therefore, you do not always need a license to breed your bearded dragons in the United States. However, your state may have specific laws preventing the selling of these lizards.

Always do your research or contact your local representative before trying to breed any species of animal, as there may be by-laws that you’ll need to follow.

Is hissing part of the mating ritual?

Bearded dragons do not vocalize as part of their mating rituals. Instead, they rely on physical cues to indicate readiness and agreeableness to mating.

If you hear hissing from the enclosure, then it is most likely the female telling the male to back off and that she is not interested in him. It is best to separate them if this is the case. Continued exposure to the male will cause the female a great deal of stress, which can lead to other health problems.

At the Tail End of Things…

Bearded dragons are hardy lizards that reproduce fairly easily and are quite prolific. Now you know how bearded dragons mate and how complicated their mating rituals are.

These rituals need to take place before mating, and the male and female need to express their interest in one another and acceptance of the mating pair. They will need to be carefully monitored during the mating ritual to ensure they are compatible and no injuries or other mishaps occur. Once this is done, your beardies are ready to get it on!