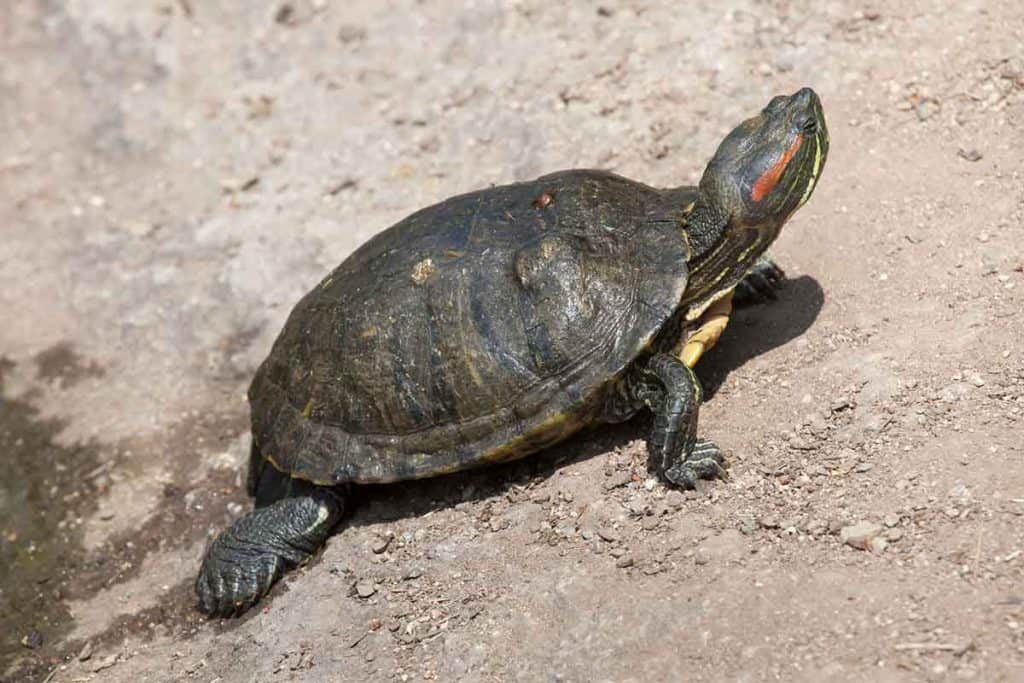 When you adopt a baby red-eared slider turtle, it will be quite tiny, with its shell measuring just an inch or two in diameter. But how big will your red-eared slider get when they’re fully grown?

In this article, we will go over the size your turtle would likely be as they reach maturity, and a general sort of timeline for their growth, since it will take them several years to reach their full size.

Additionally, we’ll take an in-depth look at the main care factors that will influence your red-eared slider’s growth and how you can help them reach their full size.

Red Eared Sliders grow to between 8 and 12 inches both in the wild and in captivity. The females tend to be at the slightly larger end of the spectrum with the males at the smaller end. However, they grow notoriously slowly, so it can take them around eight years to reach their full size, and they may keep growing a small amount their entire lives.

Baby red-eared sliders have shells that are only around 1 to 2 inches in diameter. By the time they are four years old, they still may only be about five inches in diameter. This is when you should be moving them to a bigger tank to prepare for their next growth spurt.

This turtle was originally found in the US and northern part of Mexico but found its way in many parts of the world as a result of pet owners releasing them into the wild. Considered one of the most destructive invasive species, as it is a highly opportunistic eater, and when a certain population is reached, it can destabilize habitats.

Red-eared sliders normally swim for around 30 to 45 minutes at a time and will sometimes sleep underwater for short periods of time, but they can drown as they cannot actually breathe underwater.

Females lay between 2 and 30 eggs per clutch, and the gender of the babies depends on the temperature of the eggs during the gestation period (colder temperatures produce males and warmer temperatures result in females!).

Known predators for this species include raccoons, otters, mink, foxes and other animals of similar size. 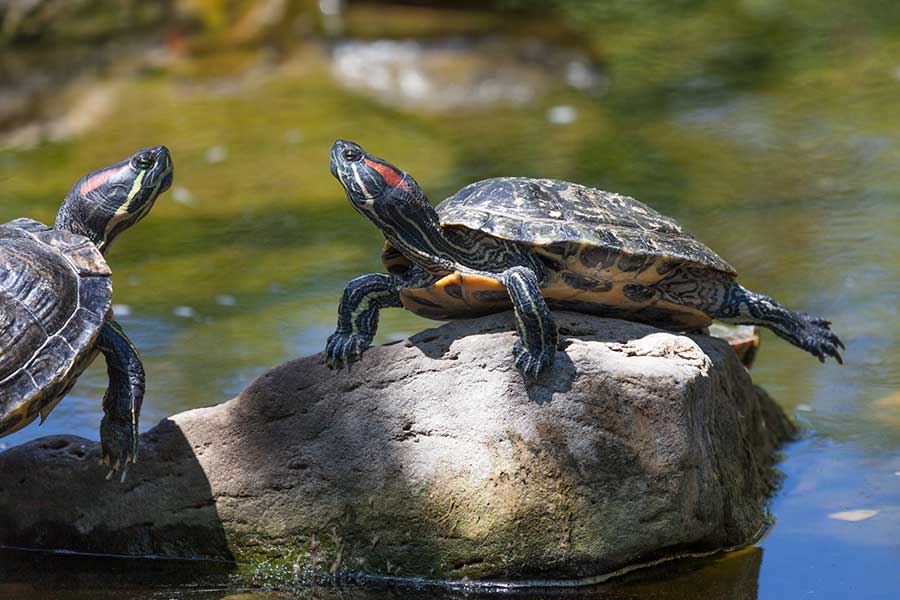 How Big Do Wild and Captive Red-Eared Sliders Get?

Both in captivity and in the wild, you can expect the typical red-eared slider turtle to reach a maximum size of roughly 10 to 12 inches in diameter. Some individuals can also be significantly smaller, maxing out at around eight inches in diameter.

The females tend to be larger than the males on average. While this is uncommon in many animals, it is normal for most turtle species. This size difference usually becomes apparent around the end of adolescence, which is when these turtles are about five years old.

How Quickly Do Red-Eared Sliders Grow?

While your red-eared slider could grow to be as big as 12 inches in diameter, you shouldn’t expect that to happen very quickly. These turtles tend to have a relatively slow pace of growth.

These turtles are considered infants until about three months, when they are usually just one inch in diameter. It then takes them about four years to pass through the adolescent phase, by the end of which you can expect them to measure about five inches in diameter.

From about five years old onward they are considered adults, but they will keep growing until they are around eight, when they will reach their final size. Again, the average fully-grown red-eared slider should have a shell diameter of between 8 and 12 inches.

When fully grown, you can expect your turtle to weigh somewhere between 3 and 6 pounds depending on their ultimate size.

Many factors can affect how quickly your red-eared slider grows as well as how large they will be when fully grown. Thankfully, most of these factors are within your control as a pet owner.

Diet is one of the main factors influencing the size of a red-eared slider. They need lots of protein to grow and plenty of nutrients, especially calcium, to develop a strong, healthy, and large shell.

They are opportunistic omnivores, which means they eat pretty much everything from small fish to aquatic vegetation. If they are in a rich natural environment, they shouldn’t have any trouble getting the nutrients they need to reach their full size.

In captivity, you’ll need to feed your turtle a good balance of fresh protein and vegetables. Focus on dark, leafy greens such as mustard greens, kale, collard greens, carrot tops, and swiss chard. Avoid foods high in oxalic acid like spinach, as these can block their calcium absorption, and while they might like fruit, it can tend to give them diarrhea.

Small fish are the best source of protein, and letting them catch and eat live fish is great for their mental and physical stimulation. You can also complement fish with insect-based protein such as worms and crickets. Fresh is good, but freeze-dried is also a reasonable alternative.

It is true that turtles will grow to occupy the space that they have access to, and if they are kept in a small environment, they will remain smaller.

Baby and juvenile red-eared sliders need a tank of at least around 55 gallons. However, if you keep them restricted to that tank size into their adulthood, they won’t simply just stop growing and stay small and adorable.

Without the space and exercise they need, they will become unhealthy and imbalanced. So, while their growth will slow down, they are also more likely to develop other complications.

An adult turtle of this species needs at least a 120-gallon tank, and bigger is always better! An outdoor pond is ideal if you can provide them with it.

Finally, since turtles tend to be messy creatures that produce significantly more waste than fish and reptiles, they need a filtration system about twice as powerful as the size of the tank that you are using. Even with this system in place, you will still need to clean the tank regularly.

Red-eared sliders need a good balance of land and water in their habitats because they love swimming but also spend hours each day basking. This combination of exercise and vitamin D absorption is vital to their healthy growth.

They need enough water to fully submerge themselves and swim. You will probably notice that they swim for about 30 minutes at a time when they decide to go for a dip. The quality of the water makes a difference to their health, and remember, they will poop in the water! Like we touched on earlier, make sure you have a good filtration system, and change the water regularly.

On their land space in their enclosure, they need space to bask in a full-spectrum heat light. This is essential for absorbing vitamin D, which turtles need in order to be able to utilize the calcium that they eat. That calcium is crucial for developing a strong, healthy shell.

Usually, your turtle will know when they are overheating and need to find some shade. Your tank also needs decent hiding areas for your turtle to go away and hide. Remember, it is while they are resting that most of their growth actually happens.

How Do Red-Eared Sliders Compare to Other Turtles in Size?

Red-eared sliders are right in the middle when it comes to the sizes of the many different kinds of turtles you are likely to see in captivity. They are comparable in size to the map turtle, which measure from 6 to 12 inches, with females being significantly larger than the males. 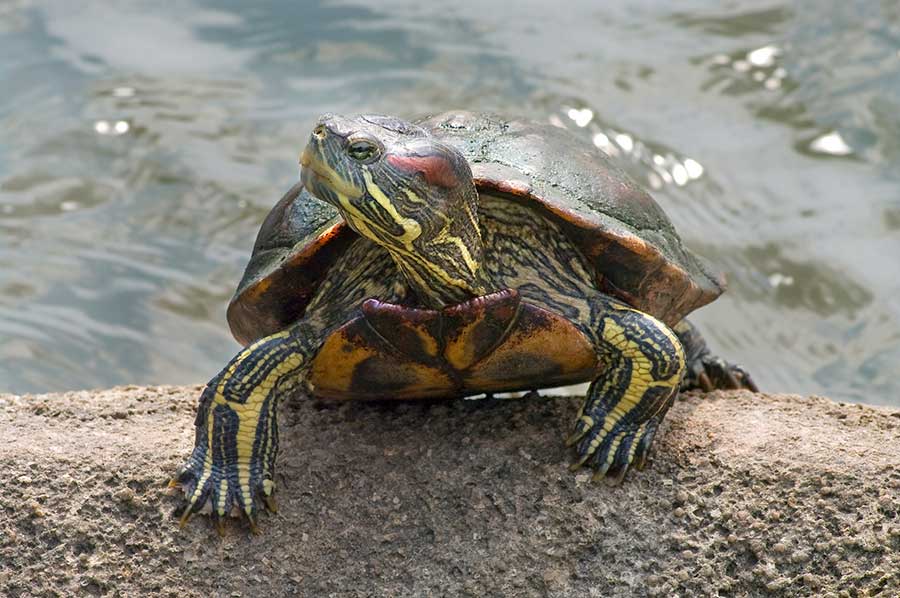 Red-eared sliders are also significantly larger than the average box turtle, which usually only reaches between 5.5 and 6 inches when fully grown, and the painted turtle, which will rarely grow larger than 6 inches.

How long does it take for red-eared sliders to grow to full size?

It takes around eight years for red-eared slider turtles to grow to their full size. They are considered adults from about five years old, but they still experience significant growth over the following years. They can even keep growing for their entire lives!

How big is a one-year-old red-eared slider?

Most one-year-old red-eared slider turtles will measure around 2 to 3 inches in diameter, but they can be a little larger or smaller.

In general, no. Like most turtles, red-eared sliders don’t like to be held, and it can cause them stress and anxiety. Most turtles also carry Salmonella, which doesn’t do them any harm, but it can make humans seriously ill. Make sure you always wash your hands thoroughly after handling your turtle.

While red-eared sliders aren’t aggressive, they can bite if they feel threatened. They have surprisingly strong little jaws, so their bite can be quite painful. However, it is unlikely to break the skin.

How long do red-eared sliders live?

Red-eared sliders can live anywhere from 20 to 50 years when properly cared for in captivity. Sadly, many die while still at the juvenile stage (less than 5 years) because of improper care.

How often should I feed a red-eared slider?

Baby and juvenile red-eared sliders should be eating daily to accommodate their rapid growth and fast metabolisms. Once they reach adulthood at about five years of age, they can be fed every two or three days.

How long can I keep my red-eared slider out of water?

Red-eared sliders are semi-aquatic and only thrive when they have ample access to both land and water. While they can survive a few days away from the water, it is not good for their health. They should only ever be kept without access to clean, fresh water for a maximum of eight hours at a time.

When you get a baby red-eared slider measuring just one inch long, it is hard to imagine that they could grow to 10 to 12 times this size! But don’t worry; this won’t happen for a while. Because they grow so slowly, it takes about eight years for these turtles to reach their full size.

Full size for a typical red-eared slider is somewhere between 8 and 12 inches. It can be hard to predict exactly how big they will get, but females will be at the larger end of the spectrum, and males are usually at the smaller end.

While their habitat will make a big difference to just how big your slider gets, don’t be tempted to be stingy with tank size in order to keep them small. It is poor health that stunts their growth, so living in an improperly sized enclosure will significantly cut their lifespan.

Finally, when adopting a red-eared slider, bear in mind that these turtles can live for 30 to 50 years, so it is a long-term commitment to care for them!

Do you have any top tips for caring for a red-eared slider turtle? Share them with the community in the comments section below.