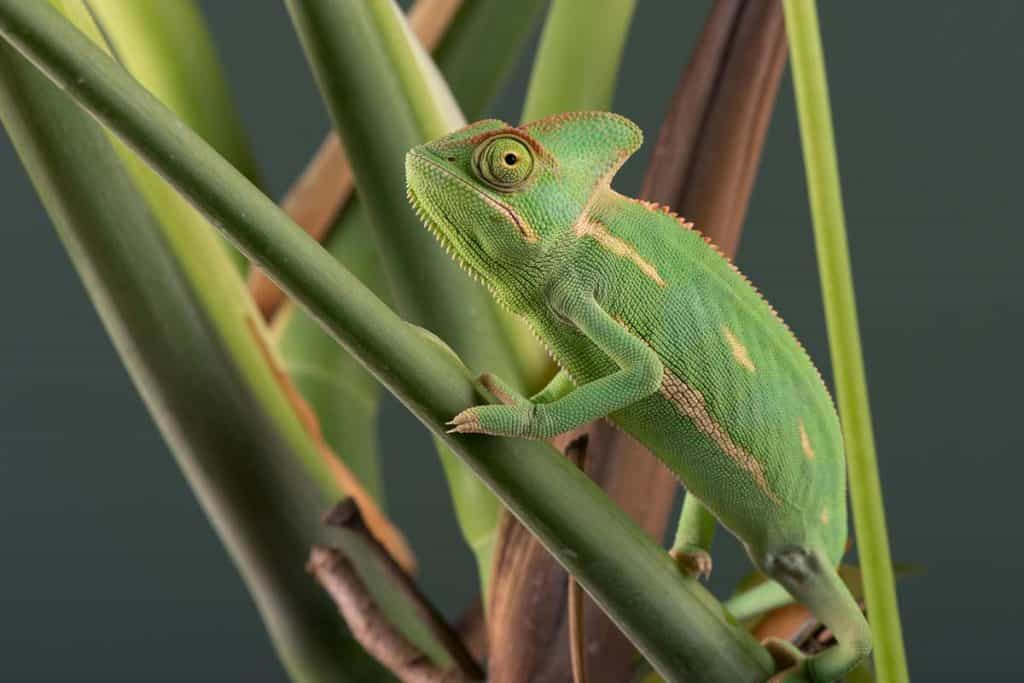 Chameleons make excellent pets if you know what you are doing, which is why they do not make great beginner’s pets. The four most popular species of chameleons to own as pets can live between 2 and 20 years depending on a number of factors.

The first factor determining how long a chameleon lives is the species they are. For example, the panther chameleon can live for roughly 3 to 6 years, whereas the Parson’s chameleon can live for over 20! The next factor that affects a chameleon’s lifespan is the age at which they reach their reproductive stage. The final factor we will discuss is the most important one: quality of husbandry!

It is essential to get your chameleon from a reputable breeder if you want to maximize their lifespan. Reputable breeders keep baby chameleons in quality habitats and feed them diets that are just right for growing and developing chameleons.

Even if your husbandry skills are top-notch, you cannot exceed the natural lifespan of a chameleon by much when it comes to their genetics. Size and sex are two of the main factors affected by a chameleon’s genetic makeup.

Generally speaking, the smaller the chameleon is, the shorter its lifespan will be. Small chameleons such as panther chameleons are easy prey in the wild because they have many natural predators. This means they evolved to reproduce quickly and make way for the next generation.

Larger chameleons, such as the Parson’s or panther chameleon, live longer lives. Their larger bodies are hardier and can sustain more variation in their environment than small chameleons.

Unlike almost any other species of lizard in the pet industry, male chameleons are typically more expensive than females. This is mostly due to the fact that they live a bit longer. Males live longer primarily because their bodies do not have to undergo the physical stress of making eggs.

Female chameleons are incredibly fecund, which means they lay a lot of eggs regularly. Even if there are no male chameleons present, they will still produce and lay eggs. Unfortunately, the process of developing and laying eggs takes up vast quantities of energy.

This energy usage comes at a cost. While males use most of their energy to keep their bodies functioning, females use theirs on egg production.

This also means species of chameleons that reach reproductive age earlier than others will live shorter lives. For example, the pygmy chameleon reaches sexual maturity in under a year and lives a much shorter life than the Parson’s chameleon, which can take up to two years to become sexually mature.

In terms of keeping lizards as pets, chameleons are very unforgiving if mistakes are made with their husbandry requirements. If you are new to keeping reptiles but still want a cool-looking lizard, then a bearded dragon or crested gecko are safer options.

There are many important parts of proper husbandry that affect a chameleon’s lifespan, from their enclosure size and design, humidity, handling, and diet.

A chameleon’s enclosure setup is critical to their survival and wellbeing. First, chameleons need a screen enclosure instead of a glass tank. This is because they are known to confuse their reflections for another chameleon, which will stress them out and lead to a shorter life.

Additionally, a chameleon’s enclosure should be on the larger side because they are very active and need a lot of space to move around and hide. An enclosure that is too small will stress out your chameleon and, in turn, shorten their lifespan.

Dehydration is a common cause of death for chameleons in captivity. Wild caught chameleons are transported in very poor conditions and end up being so dehydrated that they will die within the first year of you owning them.

Another important factor to keep in mind is chameleons do not drink standing water. They need to have a drip system or a misting system in their enclosure to provide them with water to drink. You can do this by hand or set up a homemade system, but you need to be strict with daily maintenance.

Chameleons also need to be misted daily on top of their hydration requirements to keep humidity levels within their enclosure up. They should have a quality hygrometer in their habitat so you can keep a careful eye on their humidity and make adjustments as needed. 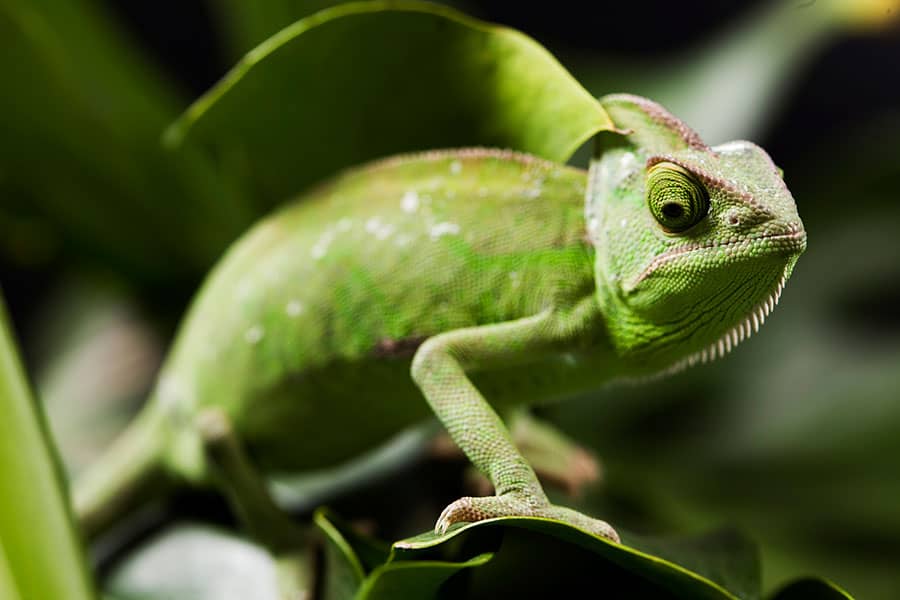 Chameleons need a nutrient-packed diet in order to thrive. They should be fed juicy live feeders such as dubia roaches, crickets, and hornworms. They also need an additional calcium supplement in their diet that can be dusted onto their feeders.

If your chameleon does not get enough protein in their diet, they will not have enough energy to sustain themselves, which leads to a shorter lifespan. A lack of calcium in a chameleon’s diet will lead to metabolic bone disease, which is painful, irreversible, and often fatal.

Handling a chameleon looks fun and is fun, but it’s not always the best thing to do for the chameleon. Some species, such as the panther chameleon, can sustain somewhat frequent handling well.

However, most chameleons are severely stressed by the physicality of handling as well as being out of their very carefully controlled environments for any length of time.

Chameleons are best enjoyed when they are viewed through their screen rather than in your hands. They are very active and will give you hours of enjoyment in their carefully kept habitat. If you want a lizard that enjoys being directly handled, a bearded dragon or leopard gecko may be a better choice. 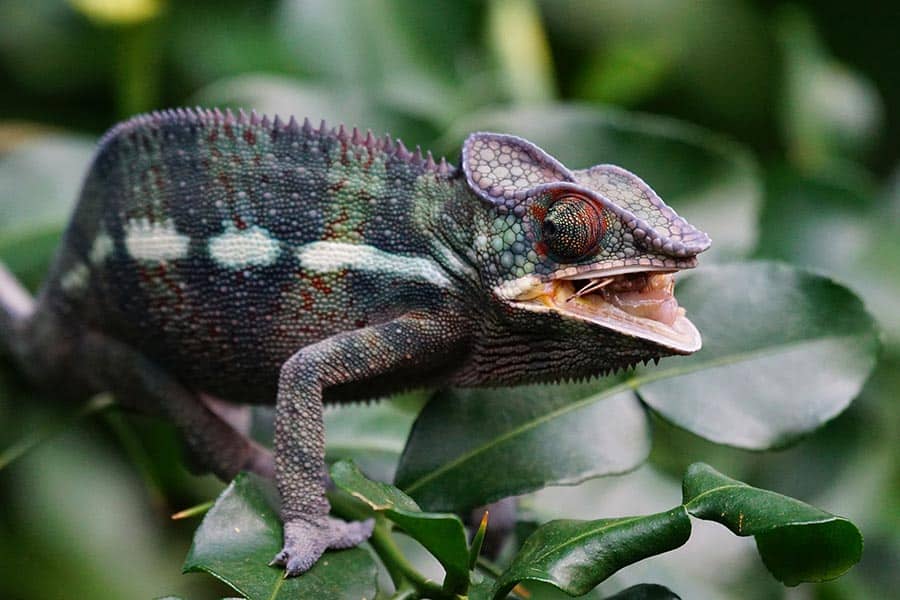 The panther chameleon is possibly the most popular pet chameleon. It is also one of the best chameleons to own because of its size and stunning coloration.

This species can sustain some handling, but watch out for signs of distress or aggression. Rapid darkening of their skin, puffing up of their throats, opening of mouths, and hissing are the key signs to watch out for. These behaviors mean they want to be put back in their enclosures asap! 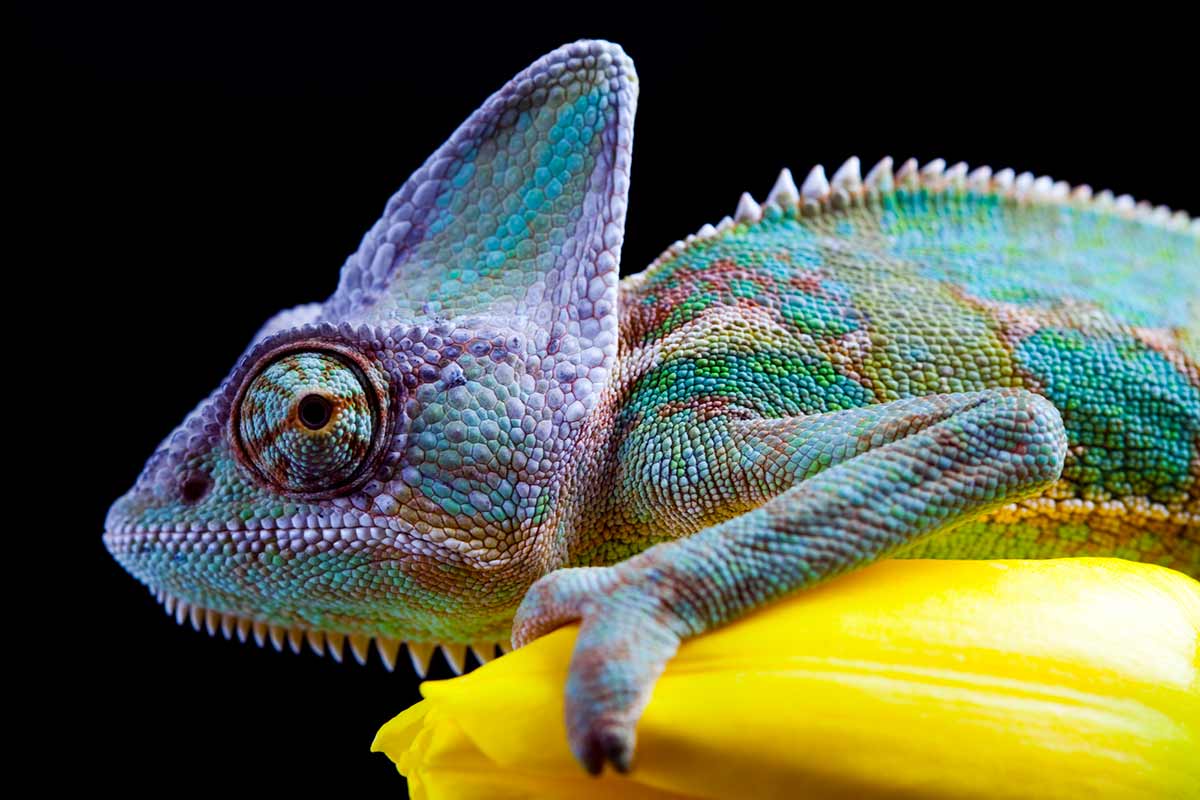 Veiled chameleons are known for their beautiful crests on their heads. They come from the Arabian Peninsula and are also known as the Yemen chameleon. They do not do well with handling at all and should be kept strictly as display pets. 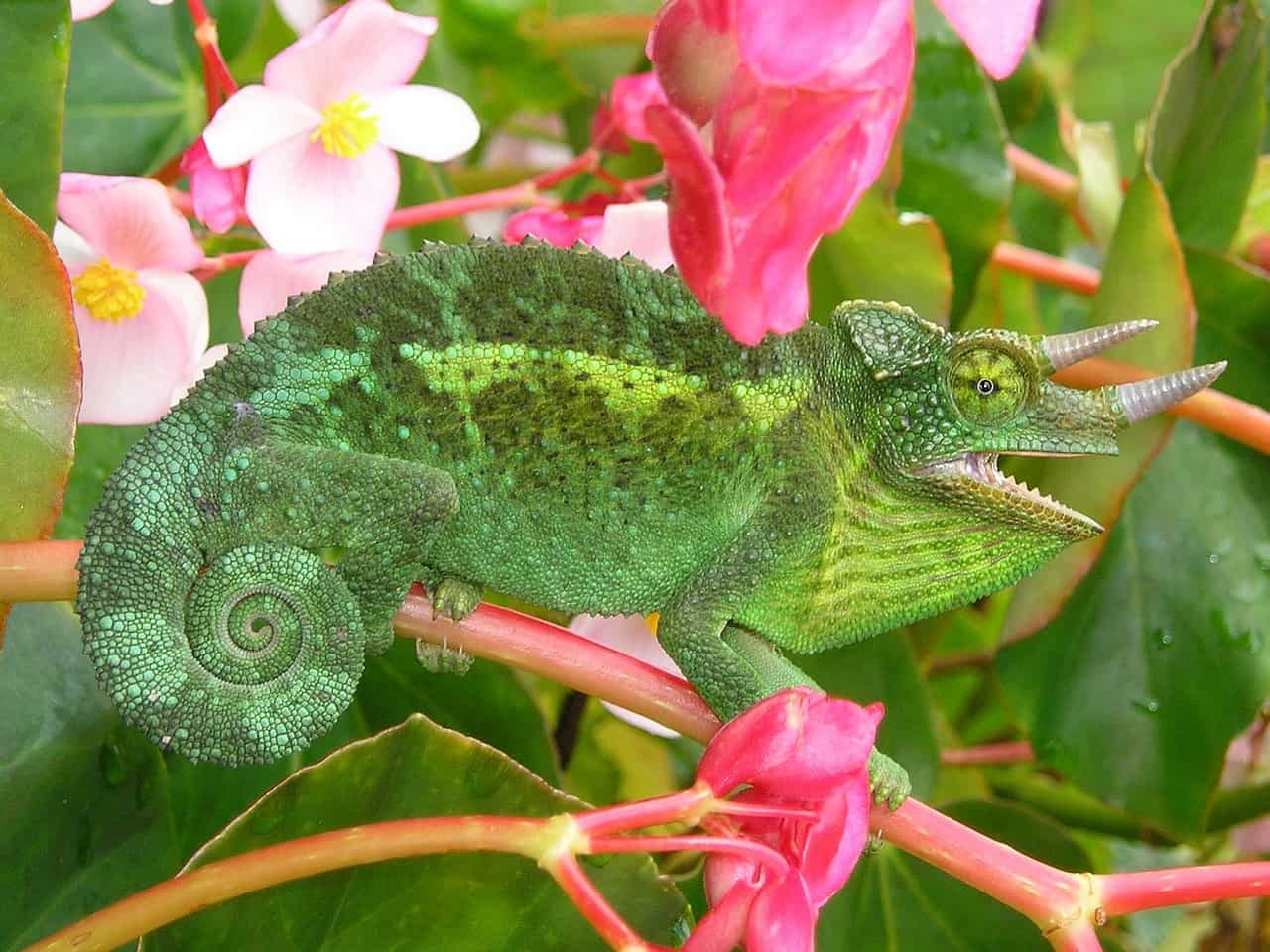 These East African natives are easily recognized by the males of the species, who have three horns on their heads: two next to their eyes and one on their nose! While they are beautiful to look at, they do not do well with being held and handled. 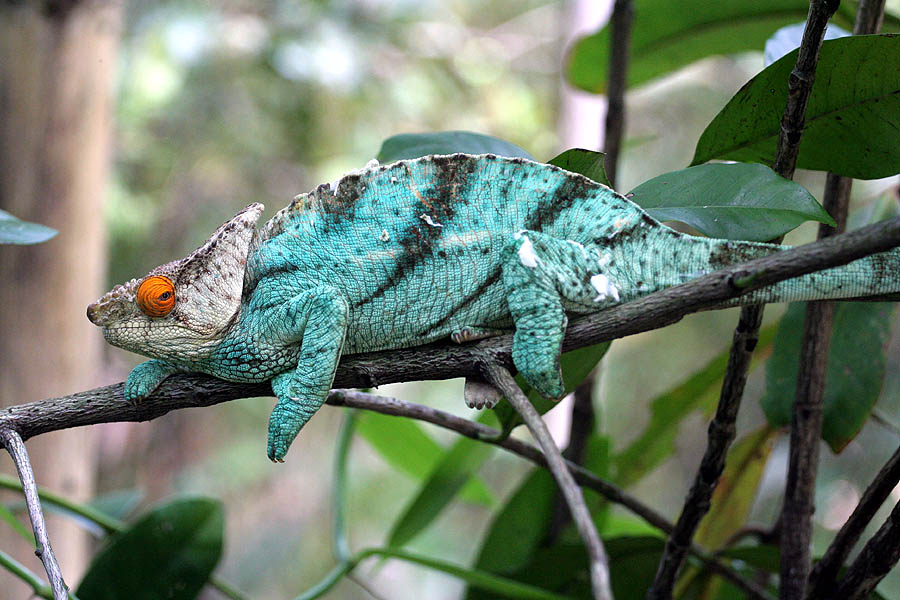 This Ethiopian native is not as readily available as the panther chameleon in the pet industry. However, once you get your hands on one, they make excellent pets. They are quite hardy if you get their care needs right from the beginning.

They are much longer lived than most other chameleons and can deal with some handling quite well.

Will I make my chameleon live longer if I feed it mouse pinkies?

Adding animal protein to your chameleon’s diet will not increase its lifespan. Not all chameleons can handle mammal-based protein or even like it. Bigger species of chameleons, such as the Parson’s chameleon, can be fed a pinkie once a month as a treat.

It is important to feed your chameleon a balanced and varied diet. This is because poor nutrition can lead to a shortened lifespan.

How long do chameleons live in the wild?

In the wild, chameleons live on average for 1 to 2 years. They suffer from predation by many animals, human interaction with their environment (deforestation and urbanization), and general environmental stress due to climate change.

Will giving my chameleon a friend lengthen its lifespan?

Chameleons are solitary reptiles and do not need companionship like a dog or a cat would. They only come together in the wild when they are ready to mate. This is because chameleons are very territorial.

The stress of seeing another chameleon is so great that it can shorten their lifespan! This is why they must be kept in screen enclosures and not glass ones so they cannot see their own reflection.

I want a chameleon that lives for a very long time. Which one should I get?

The Parson’s chameleon usually lives for a long time—as much as nine years or more. This is because they are big lizards, and they do not reach sexual maturity until they are around two years old.

What chameleon has the shortest lifespan?

The Labord’s chameleon from Madagascar only lives for 4 to 5 months! This is the shortest lived four-legged animal in the whole of the animal kingdom! They spend 8 to 9 months developing in their eggs and are alive for half that time.

Chameleons can be difficult to keep for beginners because they have very demanding husbandry requirements. However, they do make stunning pets, and you can keep them alive for quite a long time with care and dedication!