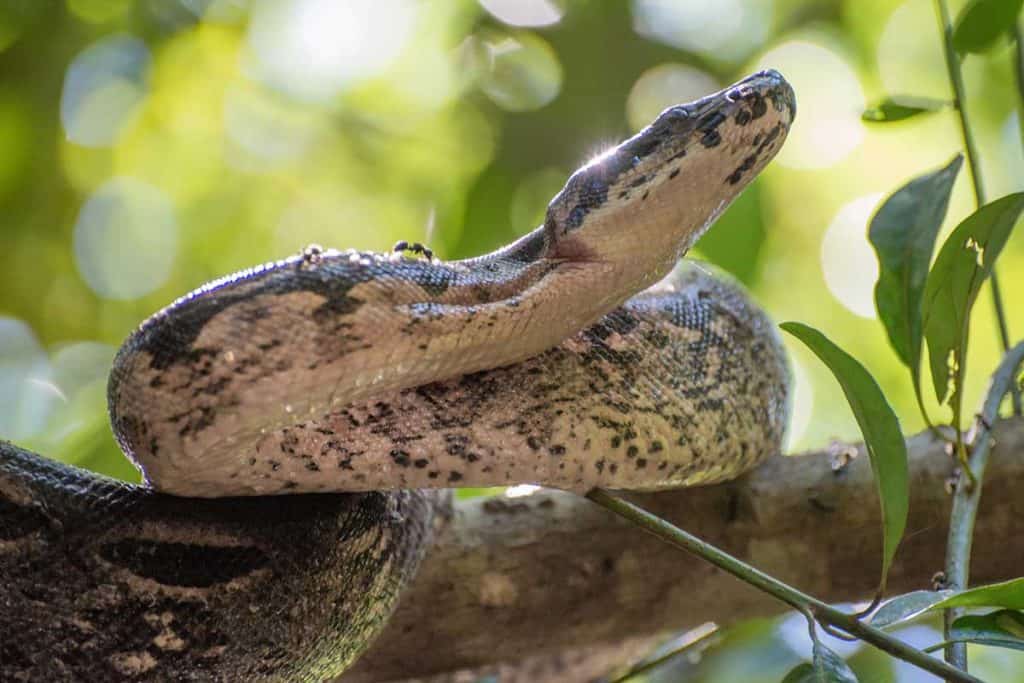 How do you tell male vs female snakes apart?

Male and female snakes share most of their behaviors and personalities. So, you don’t need to determine between a male and female snake in terms of which is better for you to own. However, if you are planning on breeding your snakes, then you definitely need to know which are males and which are females to successfully breed them!

Read on to find out how you can distinguish between male and female snakes!

The main differences between male vs female snakes are:

It is fairly difficult for an untrained eye to determine the difference between the two sexes in snakes. That is because most snakes are not sexually dimorphic. Most male and female snakes of the same species share the same markings and coloration.

There is no hard and fast rule that males are bigger than females or vice versa. In some species, the male snakes will be much larger than the females, and in other species, the female can be almost triple the size of the male!

Therefore, unless you have a growth chart on hand or a male and female of the same age right next to each other, it will be difficult to eyeball the sex of a snake based on its size.

In only approximately 14% of all snake species are males larger than females!

There is a distinct relationship in species where males are larger than females — males often fight one another over resources, territory, mates, and more. Therefore, as a rule of thumb, if your species of snake has larger males than females, do not house the males together.

In approximately 66% of all snake species, females are larger than males. That means a female snake will need a larger enclosure than a male snake of the same species.

It will influence your decision on which sex to get when you are considering the amount of space you have available. If you can only house a smaller snake, then research the species you want and see if the male or female is smaller.

Snakes have two penises! This is because they have tails, and males need access to the female’s cloaca no matter which side of her tail he ends up on. 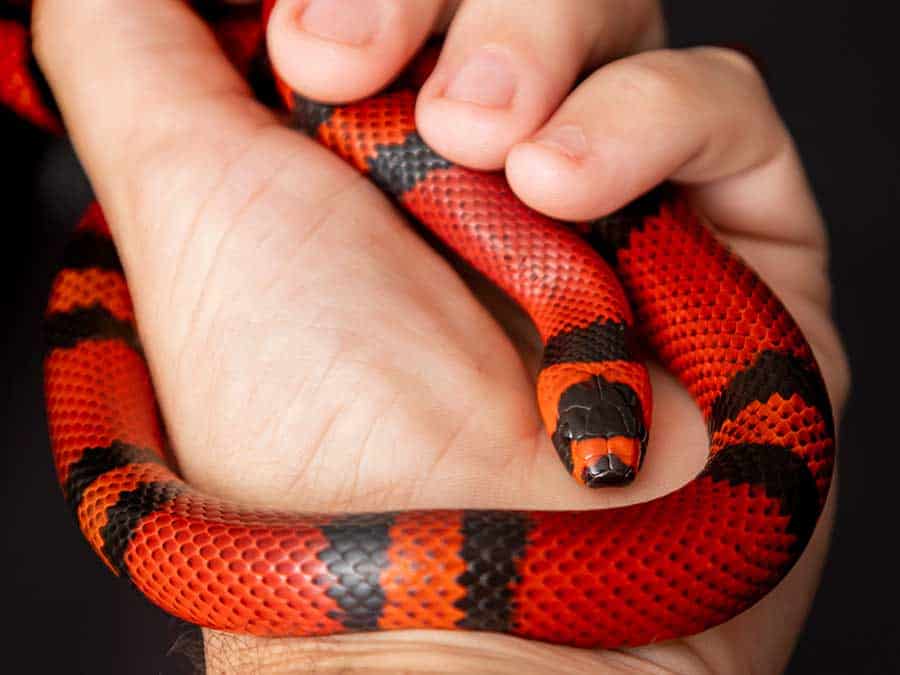 Male snakes have hemipenes tucked away inside of their cloaca. These hemipenes only come out when the snake is ready to mate.

You can determine whether your snake has hemipenes or not by probing their cloacas. This is a very delicate procedure that should not be done by beginners. If done incorrectly, you can damage your snake permanently. A reptile veterinarian or an experienced reptile breeder will likely be able to help you with this if you are inexperienced.

Another method of determining if a snake has hemipenes is by ‘popping’ them. You place your thumb on the belly side of the cloaca and apply gentle pressure, then run your thumb towards the cloaca.

A young male’s hemipenes will generally pop out. Adult males can hold their hemipenes inside. This method is a bit safer, but it still shouldn’t be attempted by beginner reptile owners. It also is not the most reliable method of determining a snake’s sex.

Female snakes do not have hemipenes. If you probe their cloaca, there will be a space inside instead of the hemipenes present in males.

Females can be identified by the lack of hemipenes or through an ultrasound of her follicles. You can take her to the vet to get an ultrasound done.

Unless you are planning on breeding your snakes, it is not necessary to determine whether they have hemipenes or not.

Snakes have separate bodies and tails! Weird right? They are not just noodles with heads!

The body of a snake contains all of the internal organs and important parts of the nervous system. At the end of a snake’s body, there is the cloaca. The cloaca is the multipurpose entry and exit hole for reptiles.

This simply means snakes poop, pee, lay eggs, give birth, and mate all through their cloacas. From their cloacas onward are their tails! A snake’s tail is mainly made up of muscle and fat.

A male snake’s tail will be much broader or fatter right after the cloaca. Then, from the cloaca, it slims down a little before ending in a blunt, rounded tip.

A female snake’s tail continues from her cloaca and slowly starts tapering off and thinning down to a delicate point at the end. It isn’t as rounded on the end as a male snake’s tail.

The only real difference is that a female snake’s tail might look a little prettier than a male’s blunt one. However, there is no real winner here, as the size or shape of a snake’s tail doesn’t affect any aspect of their life in any significant way. 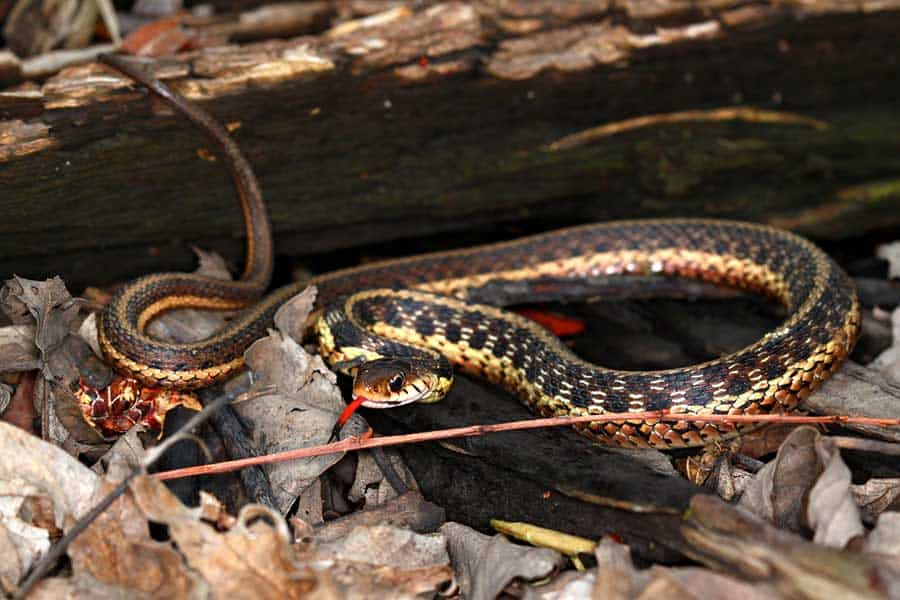 FAQs About Male and Female Snakes

Can I house two male snakes together?

Most species of male snakes commonly kept as pets are not typically aggressive and can be housed in pairs or groups.

However, their enclosure needs to be increased by 10 gallons for each snake. In addition to the size increase, there needs to be the same number of hides as there are snakes as well as a larger water bowl.

Although they will happily live together, they must not be fed together. While they may not be competing for food, their prey drives are high, and they may bite one of their housemates by accident.

Some species of snakes cannot have males housed together as they are territorial and will be aggressive.

All of these rules apply to female snakes, too! Be sure to research your specific breed of snake to determine if they can be cohabitated with other members of their species.

Can I house a male and female snake together?

When you house a male and female snake in the same enclosure, you run the risk of accidental babies! If you are not planning on breeding your snakes, do not house males and females together.

Is there a difference in husbandry for male and female snakes?

The enclosure setup, handling routines, and general care requirements of male and female snakes are identical.

The only real difference in care between the two sexes is the need for additional calcium supplements for females. When females are producing eggs or baby snakes, they need additional calcium to stay healthy; otherwise, they can suffer from metabolic bone disease.

One sex is not better or easier to care for than the other! While it helps to know the difference between the two sexes for breeding purposes, male and female snakes’ temperaments and care needs are virtually the same.

There are no real personality or temperament differences between male vs female snakes. You will only need to know the difference between the sexes if you are intending to house them together or planning on breeding them.

In that case, you will need to know which is a male and which is a female snake to determine their sleeping arrangements and who gets a calcium supplement boost with their meals.