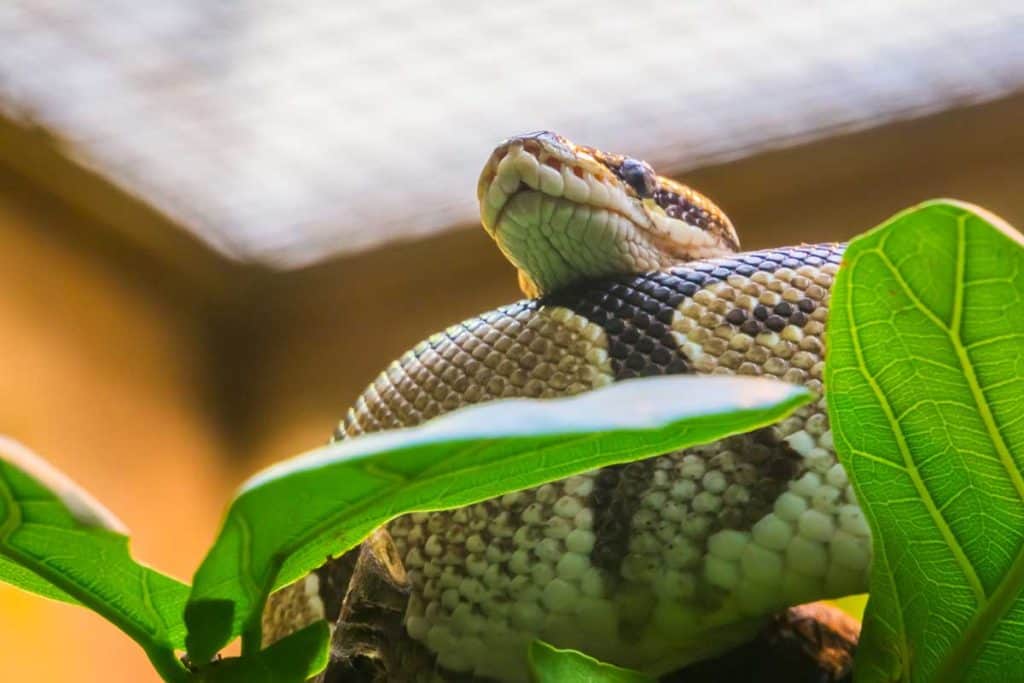 What are the main differences between male vs female ball pythons?

Unlike birds, male and female ball pythons (and most snakes in general) do not present with different colors or plumage to make it easy for us to tell them apart. Determining a ball python’s sex can be tricky.

However, it is possible to tell the sexes apart, and you can do so without probing them or seeking the help of a veterinarian or breeder! Probing snakes always runs a risk of damaging their internal organs and should be avoided by everyone except trained professionals.

This article will help you figure out whether your ball python is male or female just by looking at a few of their physical characteristics and plopping them on a scale.

The main differences between male and female ball pythons are:

Neither sex of ball python is better than the other, as they share most of their personality traits. Male and female ball pythons are very similar, and without looking for these subtle differences, you would not know the difference in terms of behavior!

However, if you need a breeding pair, then obviously having a male and female snake is essential!

If you don’t know your ball python’s age or what differentiating traits to look for, it is practically impossible to tell the difference between male and females of the species.

Males and females share similar personality traits and behavioral patterns, so the true differences come down to the physical cues.

Ball pythons are sexually dimorphic. This means there are some slight physical differences between the males and females.

Typical of most snake species, the male ball python is actually smaller than the female. The table below lists the average size and weight for female and male ball pythons according to their ages.


In only approximately 14% of all snake species, males are larger than females! In the case of ball pythons, males are smaller than the females.

This means female ball pythons are, on average, larger than the males. When it comes to how this affects their care in captivity, female pythons require slightly larger enclosures than males.

Unless you know precisely how old your snake is and what kind of diet you’ve been offering them, it may be almost impossible to determine their sex by size alone. 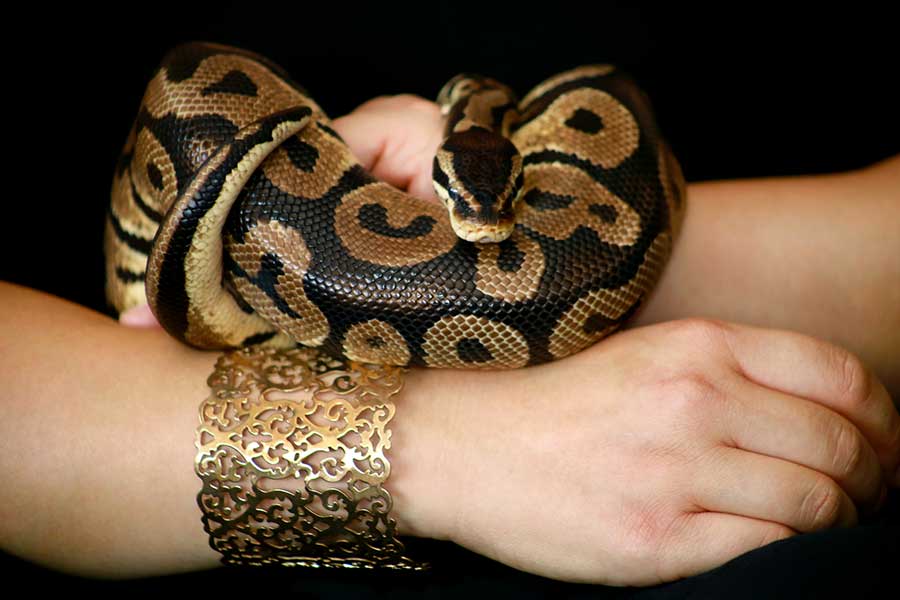 However, sometimes, these spurs will be small or almost nonexistent, even on males! You cannot rely on them alone to determine a snake’s sex.

There has been some speculation that female ball pythons use these spurs to hold onto prey; however, this is very unlikely and has been subject to much debate considering how small and weak the spurs are.

Male and female ball pythons have distinct bodies and tails.

Ball pythons poop, pee, lay eggs, give birth, and mate all through their cloacas.

From their cloacas onward is all tail. A ball python’s tail is primarily made up of muscle and fat. The shape of this part of their body can help you determine the snake’s sex.

A male ball python’s tail will typically be much broader or fatter right after the cloaca. It is bigger here because this is where the snake’s hemipenes are stored.

The hemipenes are the two penises that ball pythons use to mate with. There are two of them so that no matter what side of the female’s tail the male ends up on, he will have success!

After the cloaca, the tail will start to narrow down and it will end in a blunt, square tip.

A female ball python’s body ends at the cloaca just like the male’s. However, there is no thickening at this point. The female’s tail usually tapers off after her cloaca to a delicate point at the end rather resembling than the male’s more blunt, square tail tip.

It is difficult to tell the difference between the two tail shapes unless you have a male and a female ball python right next to each other to compare their tails or you are very experienced at ball python husbandry and are able to recognize them.

Neither tail shape is better than the other in any significant way, nor does it really affect their care–they are merely shaped differently because male ball pythons need wider tails to store their hemipenes.

Male vs Female Ball Pythons: Is One Better Than the Other? 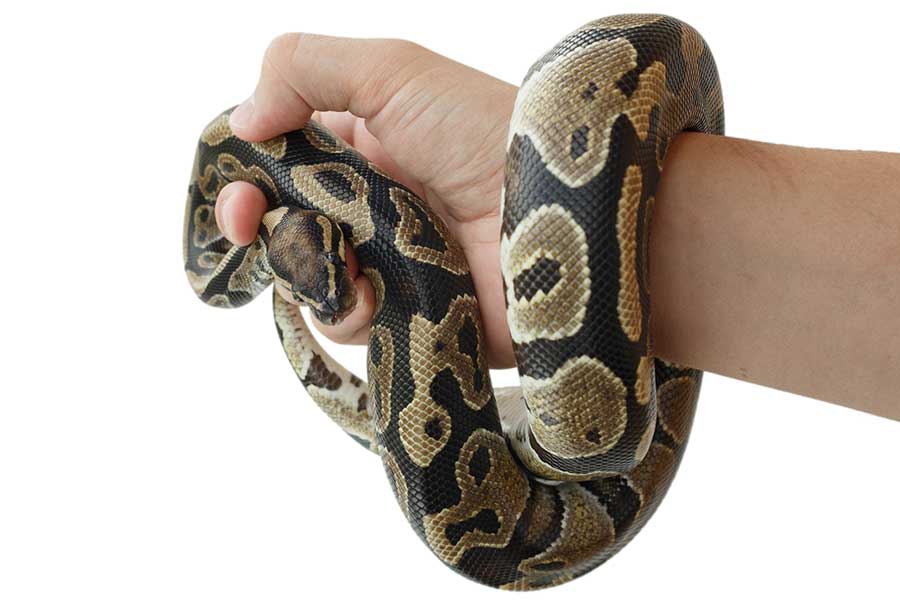 If you want a ball python because they make great pets, are easy to handle, and are simple to take care of, then figure out how much space you are willing to devote to it. If you can only manage a 40 gallon enclosure, then you should definitely get a male.

However, if you can manage a 60+ gallon enclosure, then feel free to get a female ball python!

Can I house two male ball pythons together?

Male ball pythons are not typically territorial outside of mating time, but some males get stressed out by sharing an enclosure with another snake. It’s possible to house two of them together, but their enclosure needs to be increased by at least 10 gallons for each snake. In addition to the size increase, there needs to be the same number of hides as there are snakes as well as a larger water bowl.

The two snakes also must not be fed together. While they may not be competing for food, ball pythons’ prey drives are high, and they may bite one of their housemates by accident. This would be very unfortunate because it is completely avoidable.

All of these rules apply to female ball pythons, too! It’s generally best to avoid cohabitation unless you are an experienced reptile keeper, but it is possible.

Can I house a male and female ball python together?

When you house a male and female snake in the same enclosure, you run the risk of accidental babies! Unless you are planning on breeding your ball pythons, you shouldn’t house males and females together.

Is there a difference in husbandry for male and female ball pythons?

The only real difference in care between the two sexes is the need for additional calcium supplements for females. When female ball pythons are producing eggs, they use up a lot of energy and will need additional calcium to prevent them from developing metabolic bone disease.

There are no real personality or temperament differences when it comes to male vs female ball pythons. The biggest difference and the one that matters the most is the ultimate size they will grow to as adults.

Adult females are typically much larger than adult males, which impacts the size of the enclosure they need to be housed in as well as the size or quantity of the food they eat. Female ball pythons also need additional calcium supplements to stay healthy when they are laying eggs.

If you want a huge, six-foot ball python, then go with a female. However, if you want a smaller, perhaps three- or four-foot long snake that loves a good handling session and is a tiny bit simpler to house and care for, then go for a male ball python!