All snakes can kill you with their bites, right? Though they can look menacing, most snakes aren’t remotely deadly! Snakes can kill their prey through envenomation (injecting venom) or constriction. So, are ball pythons venomous? The answer, fortunately, is no — because they are constrictor snakes.

Instead of injecting venom, ball pythons typically latch onto their prey with their teeth then tightly wrap their coils around the prey animal until it is dead, usually by asphyxiation. After all, swallowing a dead mouse is much easier than a wriggling live one!

This also means that thankfully, if your ball python bites you, you will not die from being envenomated. At worst, you may have to go to the hospital for some stitches, but you’ll probably just get a little nip that needs to be washed and watched carefully for infection. Let’s take a more in-depth look at snake venom, why ball pythons are not venomous, and how these constrictors kill their prey.

What Does Snake Venom Do?

There are five main kinds of venom. They are all designed to target different areas and processes in the envenomated animal’s (or person’s, in rarer cases) body.

Usually, venomous snakes will bite their prey and then quickly let the animal go. Then they will track the prey until it dies from their venom. If the snake does not release their prey, they will bite and hang on to the prey animal while it slowly dies.

In humans, all of these venoms cause intense pain and can cause anything from mild discomfort to death, depending on the type and dose of venom. Thankfully, most snakes’ venom isn’t deadly to humans, provided they promptly get medical attention.

But again, in the case of ball pythons, you do not have to worry about any of these because they are not venomous.

How Do Constrictors Kill Their Prey?

Constrictor snakes like ball pythons do not have venom. They rely on their bodies to tightly wrap themselves around and hold their prey until it dies.

Constrictors will bite an animal and keep their jaws clamped on them. They will then start to throw their coils around the prey’s body.

Every time the prey breathes out, the snake will tighten its coils. A combination of suffocation and pressure on the heart causes the prey to die, leaving a delicious meal behind for the snake.

Ball pythons may be big snakes, but they know they are not nearly as large or intimidating as, say, reticulated pythons or green anacondas. They also know they do not have any hope of eating a human. This means they tend to avoid biting or showing aggression towards humans, since they don’t perceive us as a potential meal.

In general, ball pythons are unlikely to bite humans at all. However, handling your snake carefully and gently at all times is essential because when ball pythons do bite, it can be quite painful. 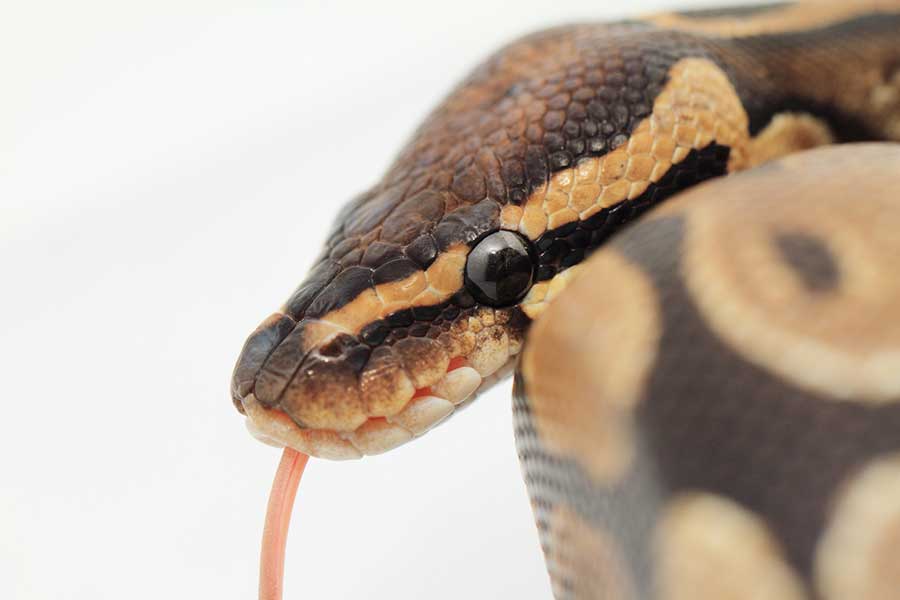 Like I touched on earlier, constrictors have to bite down and hold onto their prey while they wrap their coils around them. Unlike venomous snakes who have large, prominent fangs, constrictors have many small needle-sharp teeth that line their jaws. They have four rows of teeth on their top jaw and two rows on the bottom. This makes for a very secure and potentially agonizing bite.

Notably, ball python teeth are also curved backward. These curved teeth are intended to help the snake clamp down and hold onto their prey even when it struggles. In fact, struggling often makes their bites even worse because their teeth start to rip and tear the prey’s (or your own) flesh.

Why Do Ball Pythons Bite?

Overall, ball pythons are very shy and laid-back by nature and very rarely attack humans, much less their owners who feed and care for them. However, there are certain circumstances where they will strike out more readily than others. Below are the most common reasons that could provoke a ball python to bite their handlers.

The most common reason for a ball python biting is that it is a food response. When ball pythons are focused on eating, their instinctive prey drive is very high. If the thing in front of them (whether it’s your hand or a mouse) is the right temperature according to their heat sensors, then it is biteable in their minds.

This behavior extends to when something smells like food, too. Therefore, it is always advisable to feed your ball python with a pair of tongs. This will encourage your snake to associate the tongs with food and not your hand and can go a long way in reducing the number of bites you may sustain.

Ball pythons are shy snakes and would usually much rather ball up in their self-defense pose than strike out at someone much larger than they are. However, bites can still happen, usually because of fear or even as a means of retaliation for perceived mistreatment.

Your ball python may lash out at you if it feels like you are holding it too tightly or handling it too roughly. A snake’s skin is very delicate and is easily damaged, so if your ball python feels like it is being hurt or uncomfortable (even if you are not doing it intentionally), then it may strike out at you.

How Do You Prevent a Ball Python Bite?

There are plenty of simple yet effective recommendations you can follow to significantly lower the chance your ball python will bite you. Some of the most important ones are:

What to Do if a Ball Python Bites You

Ball pythons have, on average, 100 needle-sharp teeth. If they bite you, it is going to be painful, and you will instinctively want to pull them away from you or pull away from them. This is a very natural response, but it will only make things worse. 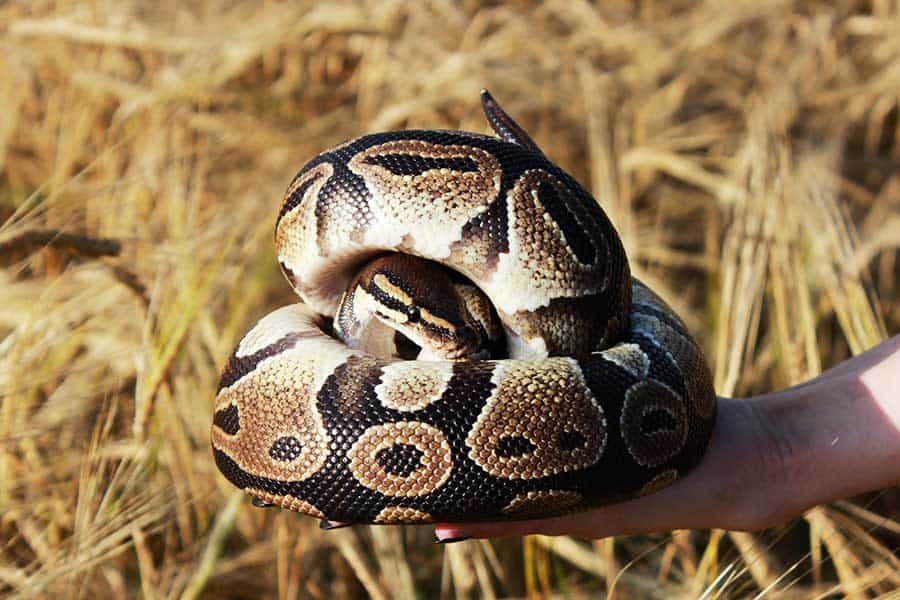 Regardless of the nature of the bite, the best thing to do is to remain calm. Get a secure grip on your snake’s body (hopefully with the help of someone else) to prevent it from coiling, especially if the bite is on your neck or face.

Next, you’ll need to wait for your snake to release on its own. This is one of the reasons why it’s so important to wash your hands often when dealing with reptiles, especially snakes–if you’ve washed your hands recently before the bite, your snake definitely won’t like the taste. Your snake also knows you are not prey, and they may just need a minute to relax enough to unlatch.

If your ball python does not look like it is going to let go, then you can get some vinegar, cold water, or drinking alcohol (not rubbing alcohol) and trickle it in your snake’s open mouth. Do not drown the poor snake; its reaction is only natural, and usually, only a drop or two is necessary. The smell and taste of the vinegar or alcohol will make it let go.

What to Do After Your Snake Releases You

Once your ball python has let go of you, gently and carefully put them back in their enclosure to calm down so they don’t become more agitated and try to bite you (or someone else) again.

Next, check your wounds carefully. In the very unlikely case that your snake has broken off a tooth in your wound, you may need to pull it out carefully with a pair of tweezers.

Wash the area thoroughly with warm water and an antibacterial solution. Even though your ball python is not venomous, snakes’ mouths are very dirty and contain a lot of bacteria that are harmful to humans. It is always advisable to go to the doctor to get some antibiotics to help with the healing process.

If the bite was severe or to a sensitive part of your body, you may need stitches and a shot of antibiotics directly to the bite area.

Are snakes venomous or poisonous?

Some snakes are venomous, and others are constrictors. No snakes are poisonous.

How do I tell the difference between venom and poison?

To wrap up… if you are a worried parent or pet owner and are wondering if ball pythons are venomous, they are not. They make excellent beginner pets for beginner reptile hobbyists and even teenagers due to their docile, laid-back temperament.

They rarely bite. And if they do, it is usually due to confusion or stress. Thankfully, the bites are almost always superficial, and while they are painful when they happen, they are not life-threatening and heal up fairly quickly!

Be sure to always handle your snake with care and respect to prevent any biting mishaps.