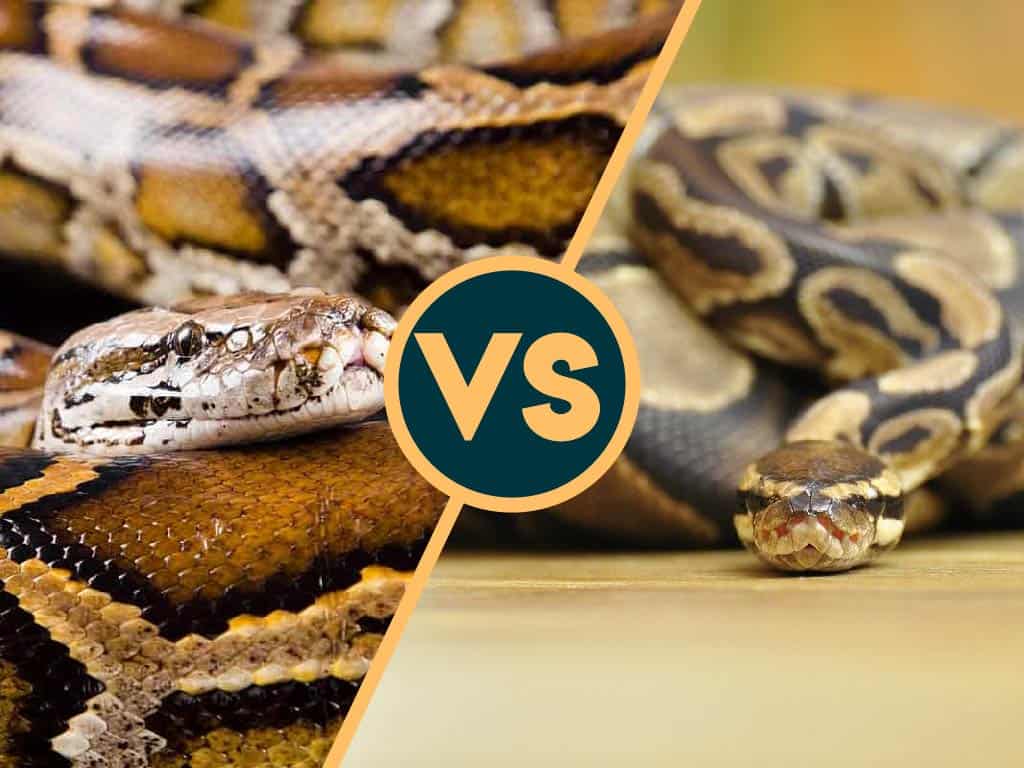 If you are in the market for a python, you may want to know the differences when it comes to Burmese pythons vs ball pythons! Both are popular pet snakes, but their needs and characteristics are unique.

For example, key differences like length and weight will help you determine which type of python you can house based on the amount of space you have. Also, with the difference in size comes a difference in the size of prey! Knowing how large these snakes can get is helpful when considering which prey items you can find and afford to feed them regularly.

You will also need to carefully think about the difference in temperament between the two python species before you decide on which you can handle and deal with safely. Other characteristics, like lifespan and handleability, are also just as important.

Read on to determine which python is the one for you!

The main differences between Burmese pythons vs ball pythons are:

However, they are both popular species of snakes to keep as pets! Ball pythons as well as Burmese pythons can be found in some adventurous and skilled herp enthusiasts’ collections. Owning both of these snakes requires a developed set of skills as well as ample space and a great deal of time and effort.

These snakes have fairly similar care needs in terms of their humidity and temperature requirements in their enclosures. However, the size of the enclosure will differ greatly because of the two species’ massive difference in size.

The length of a snake will help you determine how large its enclosure needs to be. Ideally, your snake should be able to fully and comfortably stretch its body out in its enclosure.

If your snake cannot stretch out and move around comfortably, then it will suffer in terms of its health. In many cases, an improperly sized enclosure can stunt a snake’s growth significantly and make them irritable and even aggressive. 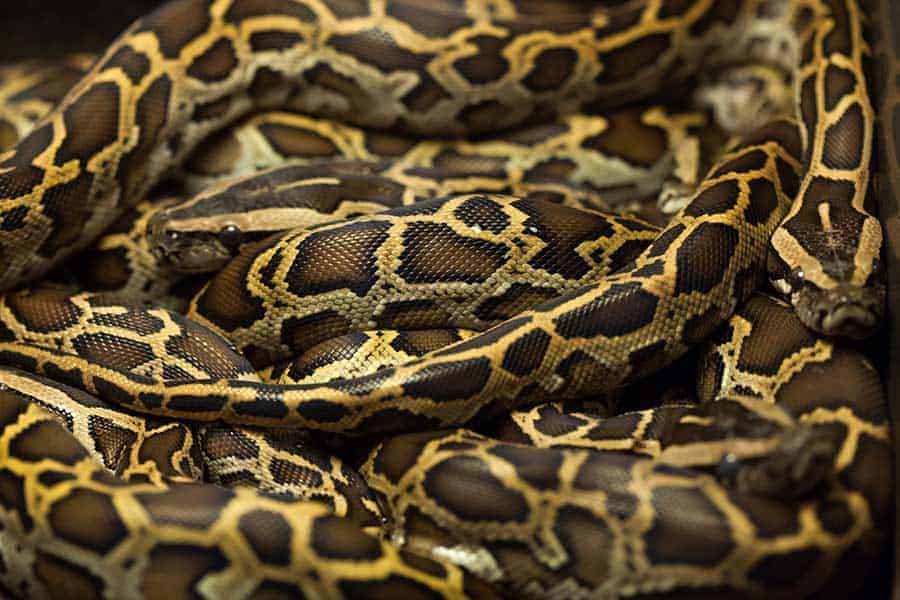 Burmese pythons are long snakes! However, they are not the longest snakes in the world. That honor goes to the reticulated python!

Burmese pythons can reach lengths of over 20 feet when they are fully grown!

These pythons start small relative to the size they will reach as an adult. As juveniles, they should be kept in a 55-gallon enclosure or larger.

However, when they are fully grown, they will need to be housed in a custom-built enclosure and roughly the size of an entire room! This means these snakes’ enclosures can be very time-consuming and costly to set up and maintain. 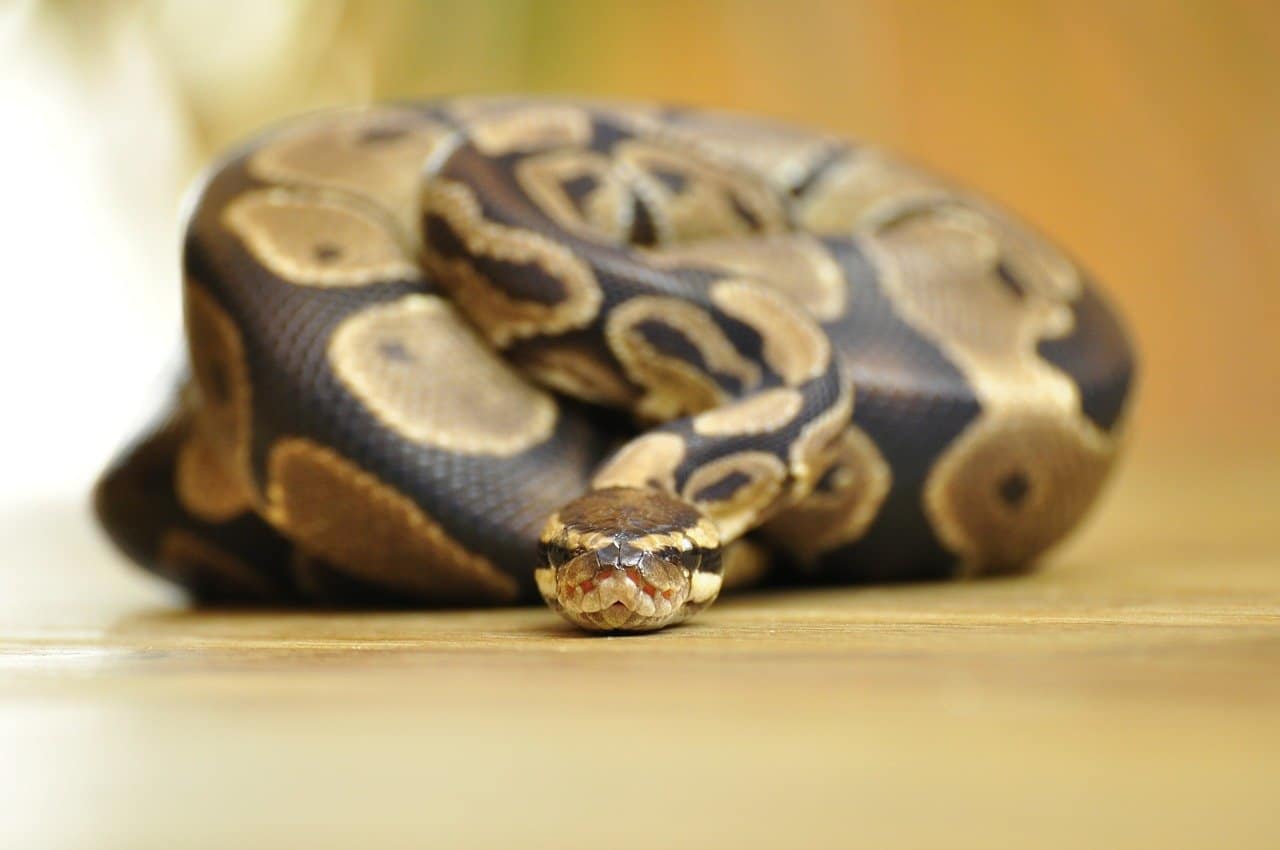 Ball pythons are much smaller than Burmese pythons and can reach a maximum of 6 feet in length when they are fully grown. However, most typical ball pythons are only around 3 to 5 feet long.

The ball python’s small size means it can be housed in a fairly small and affordable pre-made enclosure. Adult ball pythons need to be housed in 40+ gallon enclosures, ideally around 50 to 60 gallons, to stay happy and healthy.

Burmese and ball pythons that are a healthy weight have full, rounded bodies. You should not be able to see their spinal ridge or their ribs, but you should be able to feel them.

Unfortunately, obesity is common in captive snakes because once they are interested in food, they will continue to eat whatever you offer them. Obese snakes, no matter their species, will typically have visible fat wrinkles and scale separation. Additionally, they are usually more lethargic than snakes of a healthy weight.

Your snake’s weight will influence certain aspects of their care, such as their enclosure setup and their diet.

A healthy adult Burmese python can weigh over 200 pounds! Let that sink in for a bit…

These massive snakes need pretty special care. Any time their enclosure needs to be cleaned or the snake needs to be moved, you will need at least a second set of hands to ensure you do not hurt them (or yourself) by accidentally dropping them or standing on part of their body.

A healthy Burmese python’s weight will mostly be muscle. This means they are incredibly strong. Their enclosure will need to be made out of sturdy plexiglass or wood and cannot be made solely out of glass. These custom enclosures can be costly to set up and maintain!

Ball pythons will average out at a pound per foot when fully grown. Therefore, a 6-foot snake will usually weigh around 6 pounds. Most adult ball pythons weigh anywhere from 3 to 6 pounds.

This makes them the perfect size for handling and giving a good cuddle! They are not strong enough to break through glass enclosures, so a normal pre-built 40-to-60-gallon enclosure will be more than enough to house one of these snakes.

See our guide on ball python growth rates for a more in-depth look at their growth by age as well as what enclosure size they will need depending on their size.

Burmese pythons win this category thanks to their impressive size!

However, this is similar to the last category in that the Burmese python’s hefty weight makes it quite difficult to house, care for, and handle. If you are looking for a snake that is great to handle and easy to manage by yourself, then the ball python definitely wins out here!

Prey items for pythons, regardless of their exact species, will typically be small mammals or birds. This is because these snakes need a substantial amount of protein as well as calcium in every meal.

Baby pythons should be fed a small rodent like a pinky or a fuzzy mouse two to three times a week. As they become juveniles (and later adults), they should be fed an appropriate-sized prey item around once a week. Baby and juvenile snakes must eat more often than adults because they are growing rapidly, and their metabolisms are very fast at that age.

From adulthood onward, your python should be fed a meal once every two to four weeks, depending on how receptive they are to food and how much they weigh. 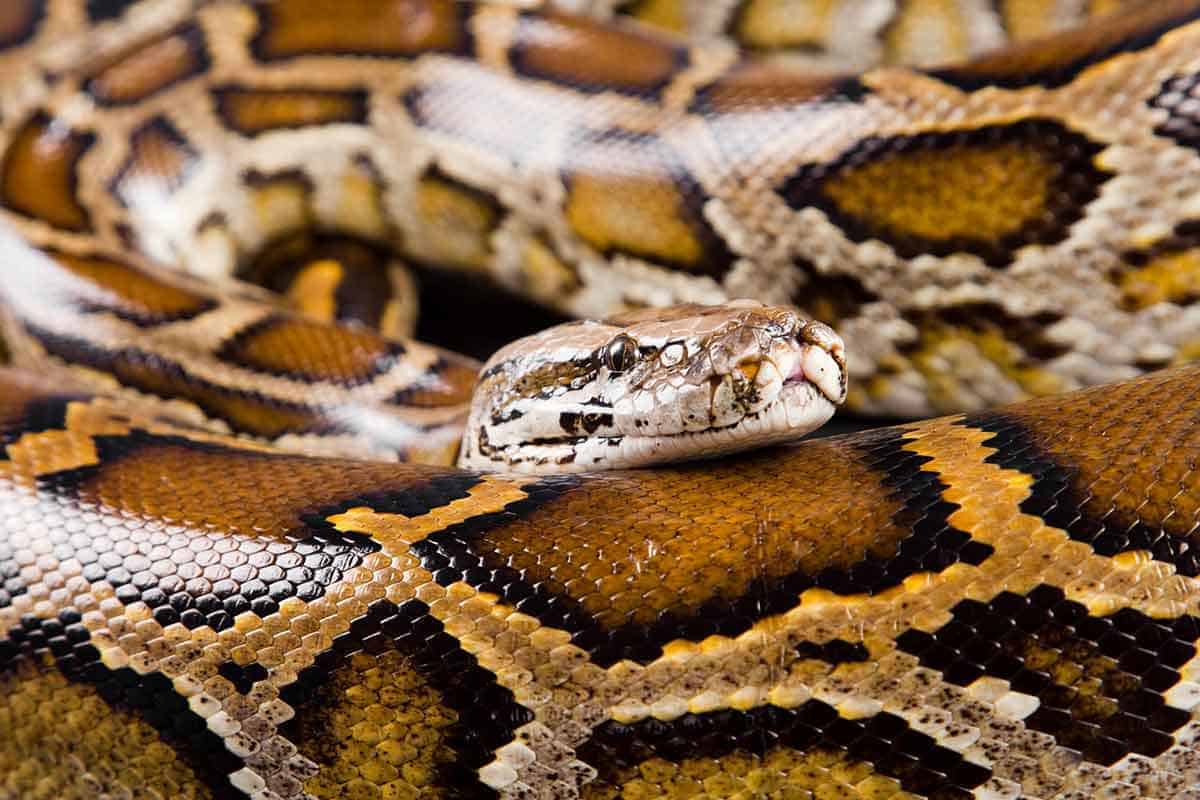 Because they are such massive snakes, adult Burmese pythons need to eat sizable prey items. They will need to eat one to two rabbits a month once they have reached adulthood. Babies and juveniles can eat smaller prey like mice and rats.

You can also supplement or substitute rabbits with similarly-sized animals that are rich in protein such as minks, small pigs, appropriate fish, quails, and chickens. These prey items can be expensive to provide and sometimes hard to find! 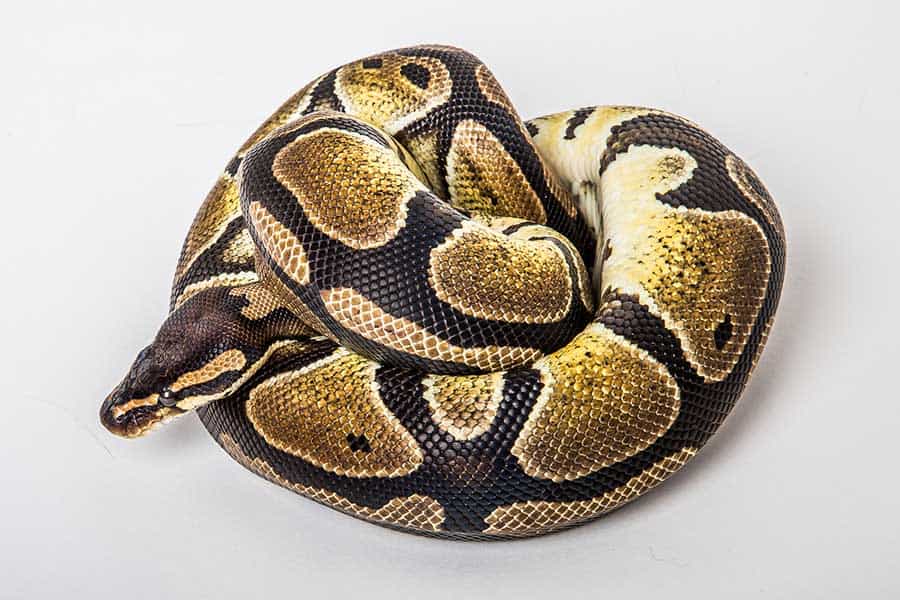 Ball pythons will happily feed on mice or rats, though some snakes prefer one over the other.

Though their dietary needs are simple, ball pythons are known to be somewhat fussy eaters. Have a look at our guide on how long ball pythons can go without eating and some tips on how to get them eating again!

Ball pythons would have to be the winner in this case simply because their prey items are cheaper, more accessible, and easier to store in bulk!

The lifespan of a snake can determine how willing and able you are to care for them. A snake that lives for only around 10 years, for example, is going to be less costly and time-consuming to care for than one that lives for 30 years. However, you may actually want a snake with a longer lifespan, as you’ll be able to spend more time bonding with them!

Snakes and other reptiles are generally long-term commitments. Many species can live for well over 15 to 20 years in captivity. Make sure you are ready for that before you adopt or buy a python!

Burmese pythons live for around 15 to 20 years in captivity on average. They are very large snakes, so healthy amounts of exercise can be difficult to achieve, which can lead to a shortened lifespan. They are also not great beginner snakes, and improper care can further decrease their lifespan.

Ball pythons are hardy, adaptable snakes that can live for around 30 to 40 years in captivity with quality care. This is mostly due to the fact that their needs are far easier to meet. They are also far more forgiving than Burmese pythons when it comes to their care.

For a more in-depth look at how long ball pythons live and what factors affect their lifespan, have a look at our guide dedicated to ball pythons’ lifespans in captivity.

Ball pythons win this category, too! On average, they live for around 10 to 20 years longer than Burmese pythons, meaning a ball python will be your scaly companion for a lot longer!

Temperament is important when buying a large snake. A feisty little corn snake or ball python is easy to deal with, but an angry anaconda is much, much harder to wrangle!

Burmese pythons are far calmer than other very large snakes such as anacondas and reticulated pythons. However, this does not mean they are gentle giants!

For starters, these huge snakes have a high prey drive. If you enter their enclosure during feeding time or you smell like their prey item, they may be inclined to strike out at you.

If your Burmese python accidentally attacks you and you do not have a helping hand nearby, you may need to be rushed to the hospital!

Also, as I have mentioned, these snakes are long, strong, and made of muscle. Even though they are non-venomous, they are powerful constrictors with a painful bite. They are generally calm and fairly mild-mannered; however, when they are startled or irritated, they can quickly become very dangerous.

Ball pythons are called ball pythons because they would rather “ball up” and shy away from predators rather than attack, even if there is food involved.

Ball pythons are normally very docile sweethearts, but their bites can still be incredibly painful.

Ball pythons win here, too, simply because a temper tantrum from one won’t end in an obituary for you or your snake. A Burmese python lashing out at you can easily end your life or leave you permanently scarred.

Which snake makes the better pet when it comes to Burmese pythons vs ball pythons? The ultimate answer would have to be ball pythons, simply because they are easier to care for, require less space, are less lethal, and live far longer than Burmese pythons.

However, Burmese pythons are still very rewarding snakes to own if you are up to the task.

You must do your homework regarding the species of snake you are wanting to own before you make your purchase!