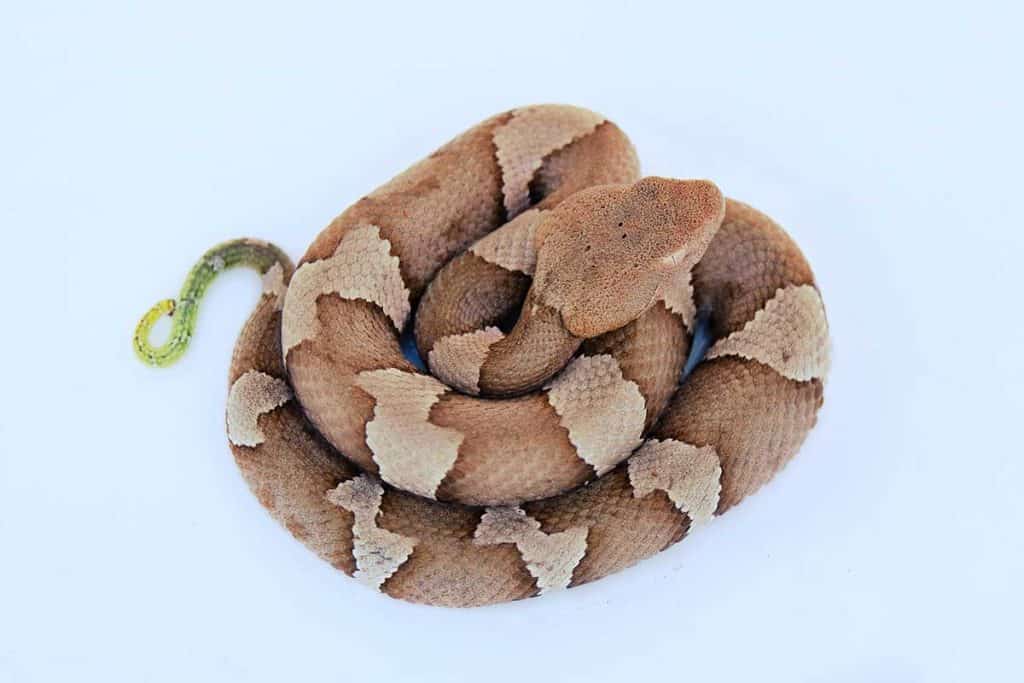 If you’ve never seen a copperhead before, you might have wondered what a baby copperhead looks like.

Even if you’re not a reptile enthusiast, maybe you’re a nature lover who spends a lot of time gardening, hiking, or camping. If so, being able to recognize and tell the difference between venomous and non-venomous snakes is a crucial skill to have.

Copperheads are a common species of snake found in the wild across the United States. They are venomous, so a bite from one requires immediate medical attention.

Keeping this in mind, knowing how to identify them is important, especially if the species is native to your area. If you spend a lot of time outdoors, being able to spot one could make the difference in whether you get bitten or not.

Plus, if you have children who like to play outside, you have to teach them to keep an eye out for copperheads so they don’t end up in a bad situation with one.

Read on to learn more about these snakes and how to identify a baby copperhead.

What You Need to Know About Copperhead Snakes

Copperheads are considered pit vipers, and they fall in the same family as rattlesnakes. They get their name from — you guessed it — their copper coloration!

Here’s everything you need to know about copperhead snakes.

Copperhead snakes have a distinct pattern with a base color that’s usually light brown or tan. Some may also have a pink or salmon tint to their bodies.

They have a dark dorsal (back) crossband pattern ranging in color from a dark, deep chestnut to reddish-brown. These bands are shaped like an hourglass, which is what distinguishes them from other non-venomous snakes that are similar in color.

Copperheads are the only species of snake with these uniquely hourglass-shaped markings. Just like many other venomous snakes, their head is triangular in shape.

Copperheads are a medium-sized snake, averaging between two and three feet long. Like most snake species, the females are typically bigger than males.

Copperhead snakes are fairly common in many parts of the United States, most notably North Carolina, Georgia, and Texas. They are also very prominent along the east coast in general.

Where adult copperheads are found, there will usually be babies nearby, especially during snake breeding season.

Be especially cautious around woodpiles, junkyards, and abandoned buildings or construction areas, because these are places that copperheads have been known to hide out in.

Though less likely, it’s possible to come across a copperhead in a non-native area, so you should still keep an eye out if you’re not from one of the locations mentioned above.

One reason that copperheads are so widespread is that there are actually five different subspecies, with each one residing in a different geographic location.

The five known copperhead subspecies are:

They can all thrive in a wide range of habitat types, including forests and other heavily wooded areas, mountains, and even canyons. 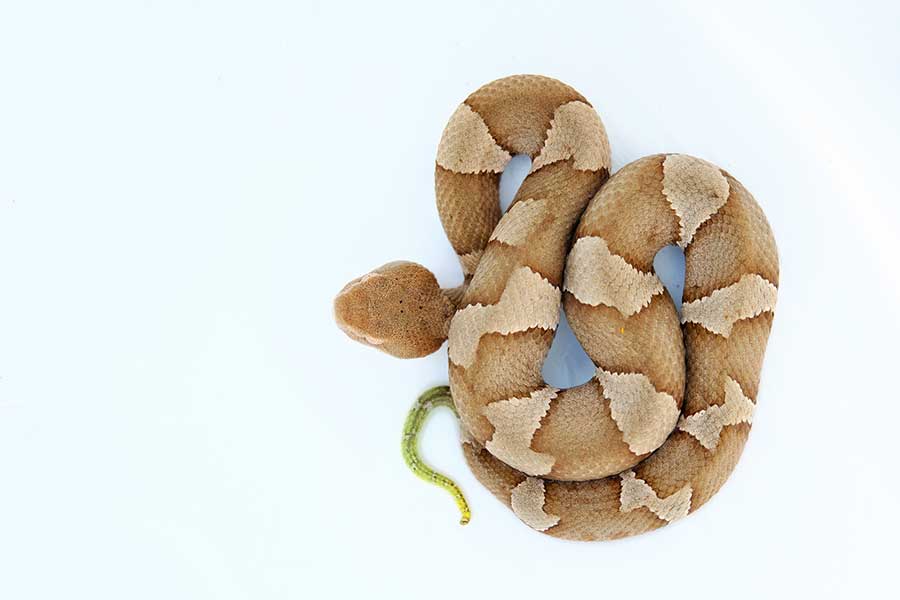 When Copperheads Are Most Active

While you can come across a copperhead at any time of year, there are certain months where you are more likely to see one.

This is because snakes are cold-blooded, and in extreme temperatures, they are not able to maintain their metabolisms. During the colder months, they will slow down and go into a form of hibernation known as brumation to conserve resources.

This hibernation period usually starts sometime in late September and can last for several months. You are least likely to see a copperhead during this time.

Copperheads are most active right before and right after the winter months. This is because late spring and early fall is their breeding season. This is when they are looking for mates and producing offspring. The chances of coming across one greatly increase during these months.

Additionally, you are most likely to have a run-in with one of these snakes during the late afternoon or evening hours, because this is when they are most active and searching for prey.

How to Identify a Baby Copperhead Snake

Let’s now get into what a baby copperhead looks like. Copperheads are amazing at camouflaging in their environment, which can make them really difficult to spot, but we have some tips to help you out!

The following are some telltale signs that will be useful when identifying a copperhead snake: 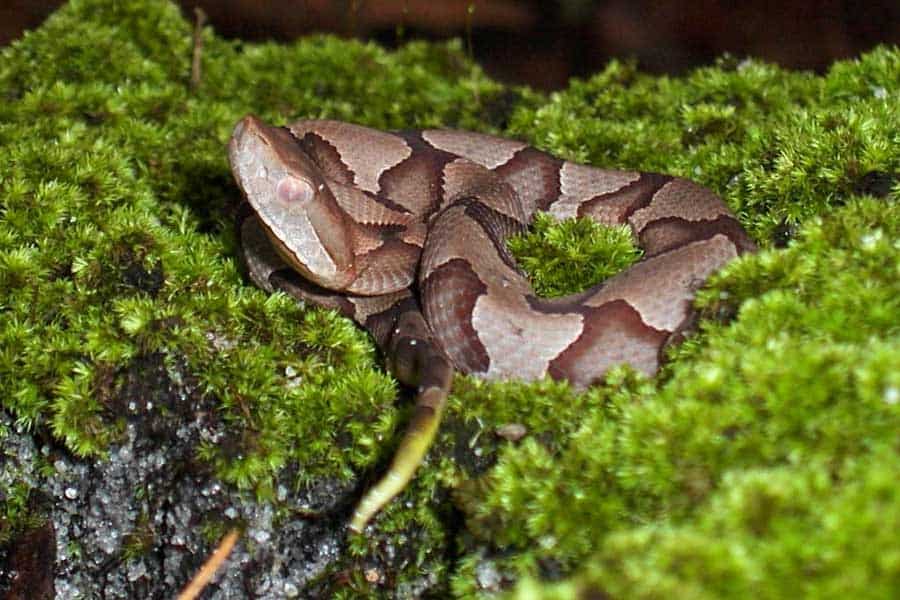 While copperheads have a unique pattern and a triangular-shaped head that distinguishes them from other species, many people who are not familiar with snakes may not be able to easily identify them at a glance.

Their common coloring means they are often mixed up with other common species. Most of these are not venomous, which means you might be mistaking a copperhead for a completely harmless snake, or vice versa!

These are a few snakes that are commonly mistaken for a copperhead:

Copperheads are venomous, so you should always be cautious and try to avoid them. A bite from them will be harmful and painful, but it’s not likely to be fatal as long as you seek immediate medical attention.

Venomous snake bites can cause permanent nerve damage if left untreated, so you’ll want to make sure to get it checked out at your local hospital immediately.

All snake bites should be treated as a medical emergency. Taking a photo (if you are able) or giving a description of the snake can also aid the medical team in giving you the correct treatment if a bite occurs.

Interestingly, getting bitten by a baby copperhead is typically a more dangerous situation than if you are bitten by an adult.

This is because babies tend to release more venom than their adult counterparts. There is also a chance that a juvenile copperhead will inject no venom at all, but it’s impossible to tell until after the bite.

If you are bitten by a baby copperhead, stay calm. Panicking will do you no good, because as your heart rate increases, the snake’s venom will spread more rapidly throughout your system.

Try to stay relaxed and seek medical attention as quickly as possible. A baby copperhead bite is likely to be very painful and will be prone to swelling. Luckily, though, you can lower the risk of permanent nerve damage by having the bite treated immediately.

If you see a copperhead in your yard, the best thing to do is contact an expert for removal. Trying to remove one on your own could lead to a nasty bite, which you definitely don’t want!

Another thing to keep in mind is that if you see a baby copperhead on your property, there are likely several more nearby. So even if you remove one, there may be others that are hiding away.

All that said, it’s just not worth the trouble (or the potential hospital visit) to attempt removal on your own. So, how can you avoid attracting copperheads to hang out on your property?

Remember that copperheads love small, dark spaces that they can hide out in. Make sure that your yard is kept free of clutter and woodpiles. Keeping your grass trimmed can also reduce your chances of a snake problem.

Where do copperheads lay their eggs?

Copperheads can usually be found nesting near streams, rivers, marshes, and lakes. They will lay eggs along the borders of bodies of water, but they have also been known to hide out inside rock formations such as caves and hollow logs.

These snakes are also known to hide out in wood and sawdust piles, as well as junkyards and abandoned buildings. They like shady spots and small spaces, so make sure to always keep one eye open when traversing cluttered areas!

Unlike other snakes that are egg-laying, copperheads are ovoviviparous, meaning they give birth to their babies in a sac filled with amniotic fluid. This is similar to a live birth of a mammal. With that said, baby copperheads can bite almost immediately after birth, so don’t underestimate them!

How long do baby copperheads stay with their mother?

Copperheads usually give birth to between 8 and 10 offspring during August or late September. Since they give birth to live young rather than laying eggs, mother copperheads do not stick around to care for their young.

Unlike eggs, baby copperheads do not need to be kept warm by their mother’s body heat. They are born with venom and are fully capable of defending themselves against any threats.

Snakes become independent and self-sufficient almost immediately after being born. The mother may stay nearby, but she is not likely to provide any sort of protection for her offspring aside from caring for her eggs before they hatch.

Do copperheads chase you?

Copperheads are not known to chase or hunt humans. In fact, they are more likely to run away than they are to attack you.

Just take a look at their coloring. Their dark, brown patterning can make them super difficult to spot. They rely on this camouflaging ability to hide from predators and anything they see as a threat–including humans like you.

While they would prefer to stay hidden from you, copperheads do tend to be territorial, so they may strike at you if they feel threatened or are startled. One of the most common ways people end up bitten by a copperhead is by accidentally stepping on one.

Most copperheads are not aggressive or mean, but they will defend themselves and their territory if needed, so make sure to keep your distance if you see one!

After reading this article, you should feel confident in knowing how to identify baby copperhead snakes as well as adult ones.

Having this knowledge is important for several reasons! Being able to differentiate between common non-venomous and venomous snakes means you’ll be able to prevent getting bitten. As an additional benefit, you’ll also be able to avoid removing or killing harmless snakes that are commonly mistaken for copperheads.

Whether you are a concerned parent, nature lover, or reptile enthusiast, knowing what a baby copperhead looks like will help you stay safe.