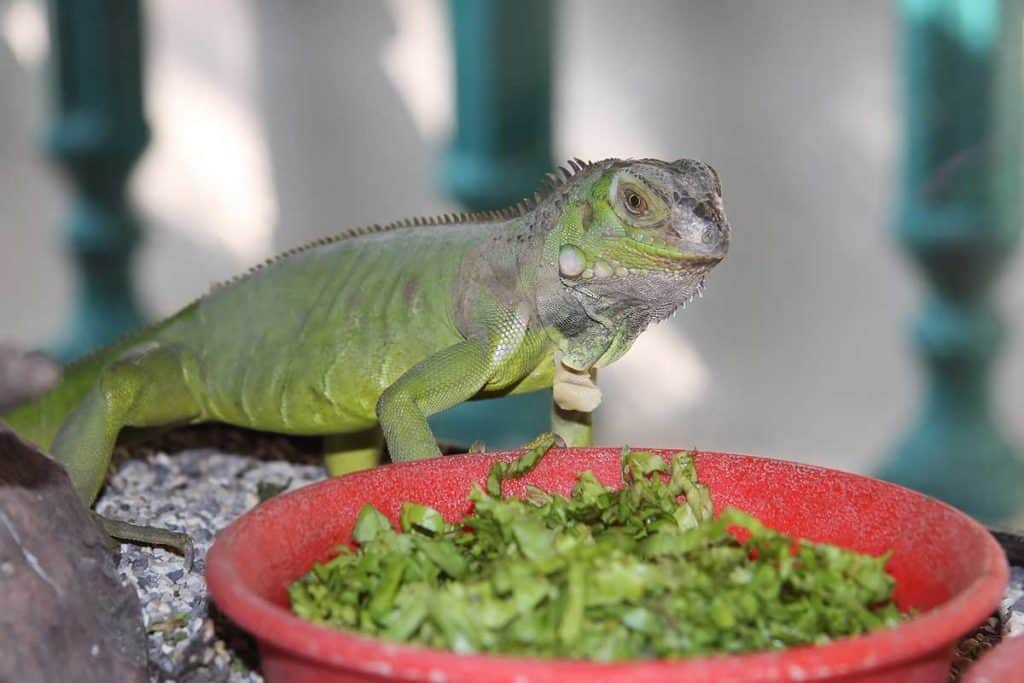 There are many different kinds of lizards found in the rich biodiversity that is Florida’s ecosystem. Each one fills a specific niche and plays a particular in this ecosystem, so they all have their own special diet. So, what do Florida lizards eat?

Lizards in Florida will eat different things depending on what category their diet falls under. There are four main categories when it comes to lizards. Herbivores only eat plant matter, insectivores only eat insects, omnivores eat a combination of plant matter and insects or animals, and carnivores eat animals and eggs.

Read on to find out what insects, plants, and animals Florida’s lizards love to eat. Then, check out the quick profiles below of 10 of the most commonly found lizards in Florida!

What Insects Do Florida Lizards Eat?

Insects are among the most common lizard fare! This is because a wide range of lizard species are either omnivorous or purely insectivorous, a specific type of carnivore that only feeds on insects.

Lizards that love insects are going to find abundance in these commonly found insects in Florida:

If you spot an insect in Florida and would like to know what it is, use this awesome photographic identification guide to help you! This guide can tell you what an insect looks like, how big it gets, any important scientific information, and where you can find it.

What Plants Do Florida Lizards Eat?

Herbivores and omnivores looking for a healthy snack will go for the younger and fresher leaves of many different plants. Kudzu, sword ferns, and fruit tree leaves are all favorites.

There are many common plants found in Florida; however, many of them (like some of our lizards on this list) are invasive species.

Invasive species use the natural resources in a way that often out-competes the native species and offsets entire ecosystems. If you are wanting to fill your garden with plants that will help boost native biodiversity and maybe provide local lizards with a healthy snack, have a look at this list!

What Animals Do Florida Lizards Eat?

Carnivores and omnivores will have no problem in finding prey items in Florida. Some meat-eating lizards are small and feed on tiny rodents and birds’ eggs, while others are quite large and can take down other lizards and birds!

Some common animals that will make a tasty meal for a variety of Florida’s lizards are:

Now that you have a better idea of what Florida’s lizards like to eat, here are 10 of the most common species in the Sunshine State and some interesting facts about them and their diets! 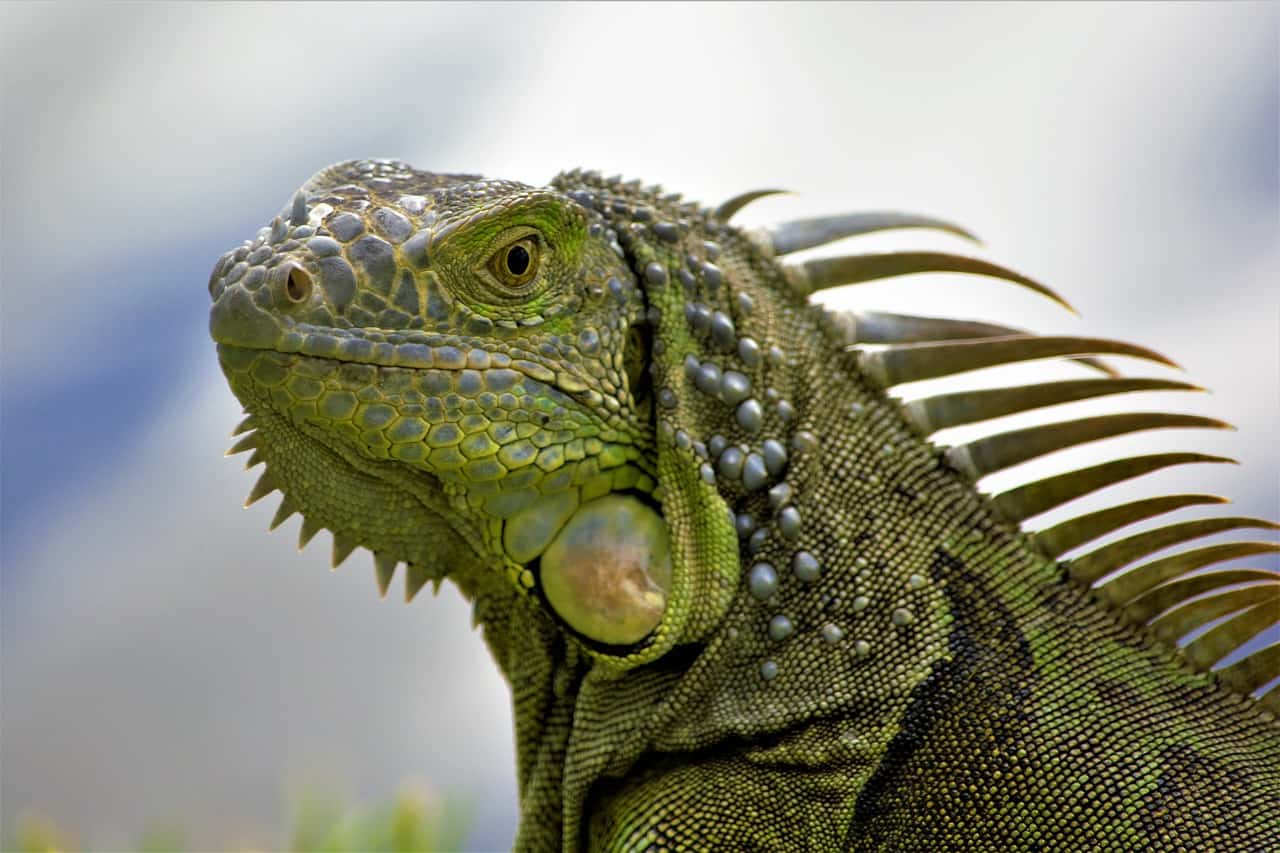 Green iguanas are strict herbivores, meaning they only eat plants. If a bug or two happen to make their way into an iguana’s mouth while it is chowing down on some leaves, though, it is not the end of the world. However, green iguanas do not intend for this to happen and will not seek out insects for food.

Green iguanas are a very large, hardy, and, unfortunately, invasive species of lizard in Florida that cause endless havoc to the state’s natural ecosystem. Their numbers have grown exponentially to the point that it is even illegal to own them as pets within the state!

For a more in-depth look at what green iguanas eat, check out our guide dedicated to what your green iguana should eat in captivity.

Green anoles are insectivores, so they exclusively eat small insects like flies, ants, grubs, and beetles. These stunning green lizards grow to 6” to 8” long on average and will typically live a healthy 5 to 7 years. 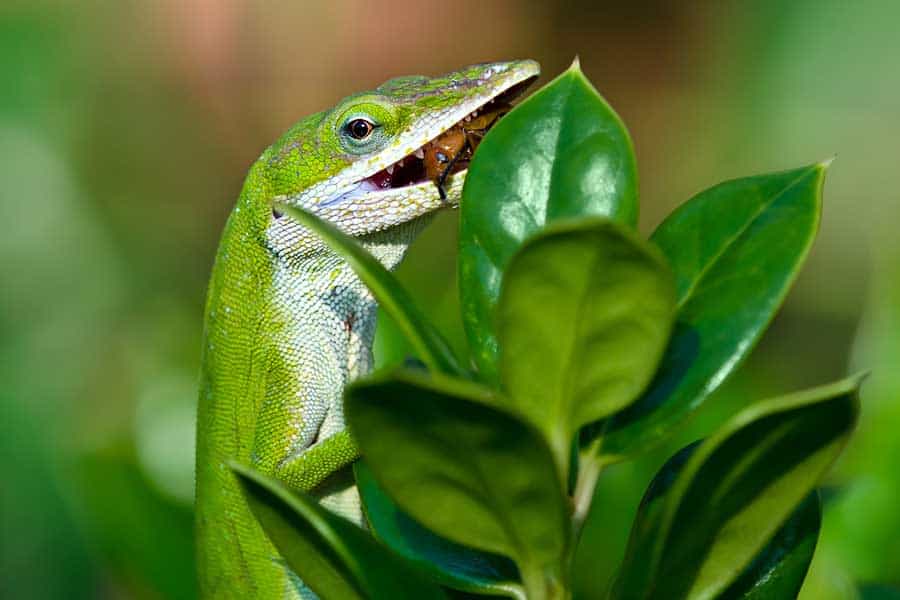 They are striking in their bright green appearance, and males have a special dewlap on their necks that will turn bright red and protrude outward when they are gearing up for a fight or to attract a mate.

When they need to hide from their many natural predators, they can change color just like a chameleon! Green anoles are able to dull their brilliant green skin to a barky-brown in order to blend in with their surroundings. 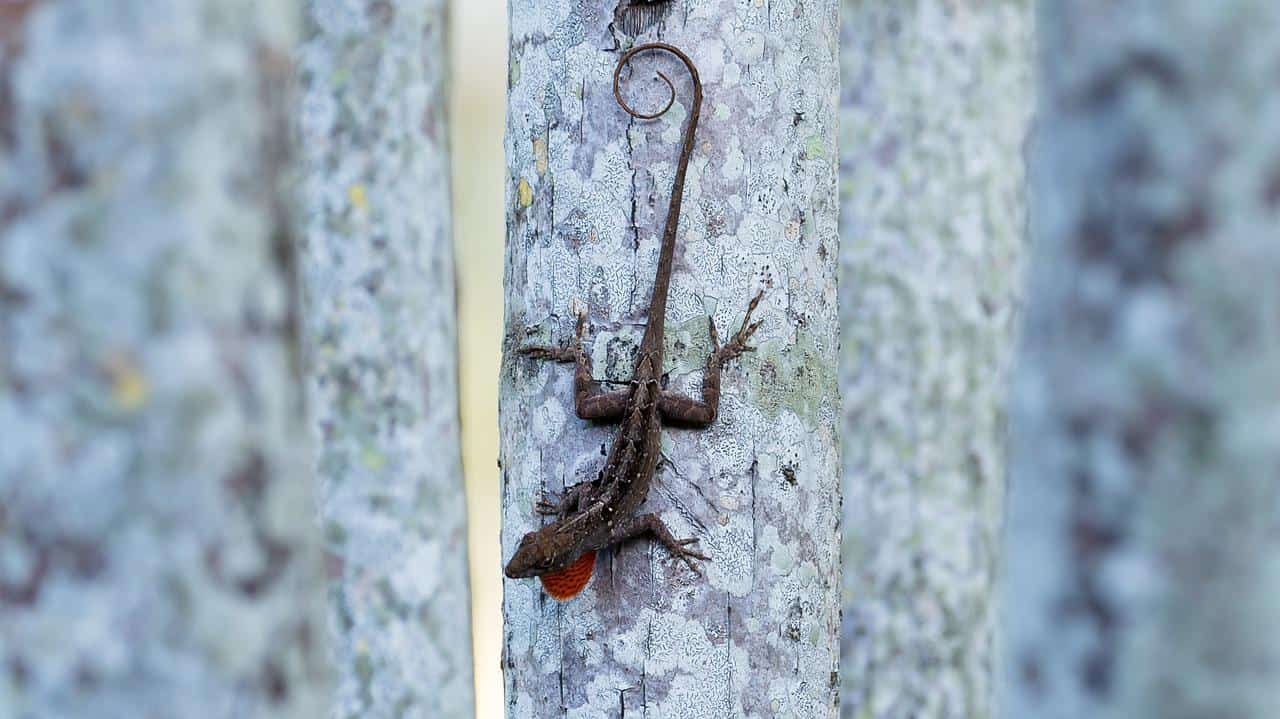 Brown anoles, much like their smaller cousins, mainly eat insects. However, they will not shy away from also eating green anole eggs, baby green anoles, and other smaller lizard species. This has become a serious problem in Florida.

Brown anoles are not native to Florida and are outcompeting and outright eating many of the native lizards into oblivion. There has been a notable decline in the green anole population in Florida because of the brown anoles.

The six-lined racerunner is a slim lizard that measures at an impressive 8 inches on average. They are insectivores and snack on larger insects in the area such as grasshoppers, adult crickets, and large roaches.

As their name indicates, they have six thin, light colored lines that run down the length of their bodies. These lizards look velvety soft and have a brown to dark green skin tone with light green and dark brown markings.

These little guys chow down on the smaller insects that you find in Florida, such as small crickets and fruit flies.

They only reach about 6” inches in length and can be difficult to spot because their coloration and markings help them blend in perfectly to their surroundings. They have a mottled brown and black body that looks very similar to a fallen log or rock. Interestingly, male eastern fence lizards often have bright blue markings on their bellies during the species’ breeding season! 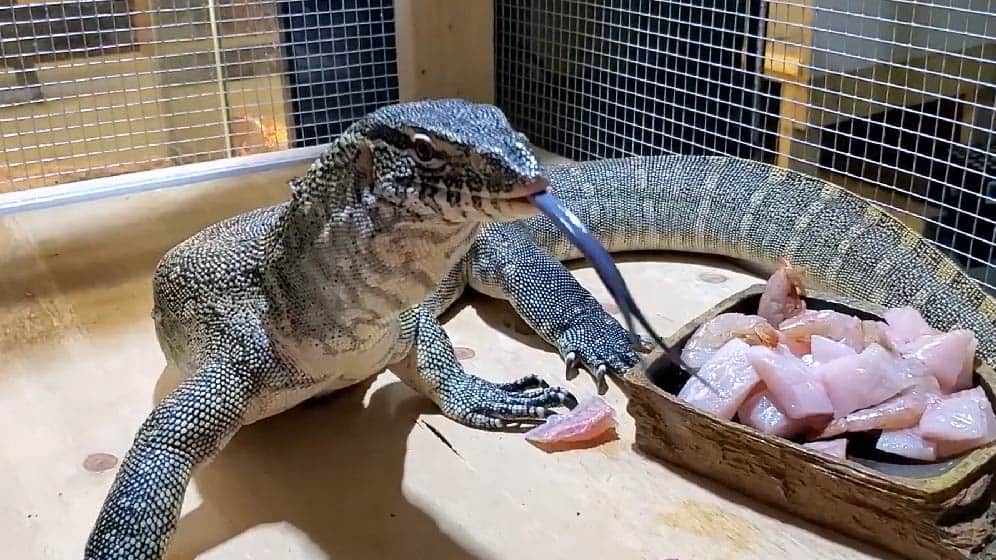 Nile monitors are large, strong, aggressive lizards and will not hesitate to attack humans. They measure on average at 75 inches in length, which puts them in competition with some of the local alligators!

These impressive reptiles are carnivores and snack on anything they can get their jaws around. This includes birds, mammals, crabs, amphibians, lizards, eggs, turtles, and more! They have voracious appetites and are highly opportunistic hunters.

These lizards do not make good pets due to their size, aggressive temperament, and difficult care requirements. If you are looking for a more pet-friendly monitor, then check out our list of the best monitors to own!

The Argentine black and white tegu is very popular in the pet trade. Unfortunately, when these tegus got too big for some of their owners, they were released into the Florida wilderness, where they found plenty of prey and not much competition.

This led to a massive spike in their population, and they have now become a nuisance and danger to the local wildlife and ecosystem.

Tegus are very large, measuring in at 60 inches on average. They are omnivores and have a healthy appetite for bird and reptile eggs, rodents, small mammals, smaller lizards, and even fruit.

The Florida scrub lizard is endemic to Florida! That means it is only found in the Sunshine State!

These little lizards only measure at around 5” long, with their tails making up more than 60% of their total body length.

As their name suggests, they live in the natural scrub areas of Florida where they snack on a variety of insects and other invertebrates like spiders. If you have a garden that suits their needs, then you may find one or two providing free pest control! 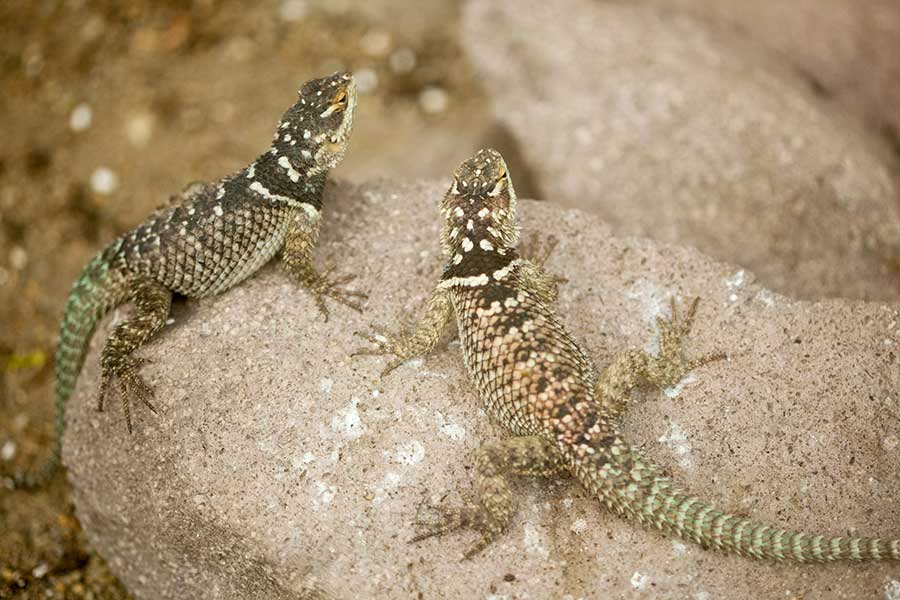 Mediterranean house geckos are nocturnal. They come out at night to hunt and go about their business and rest during the day.

Notably, these lizards have a very laid-back hunting style. When they’re hungry, they sit at an outdoor light fixture and wait for moths and beetles to be attracted to the light. When the bugs get close enough, the geckos can easily snatch them up!

If you are looking for a gecko to love as a pet, check out our list of the best pet geckos!

Geckos have many different diets depending on what species they are. Check out our general guide on what geckos eat. 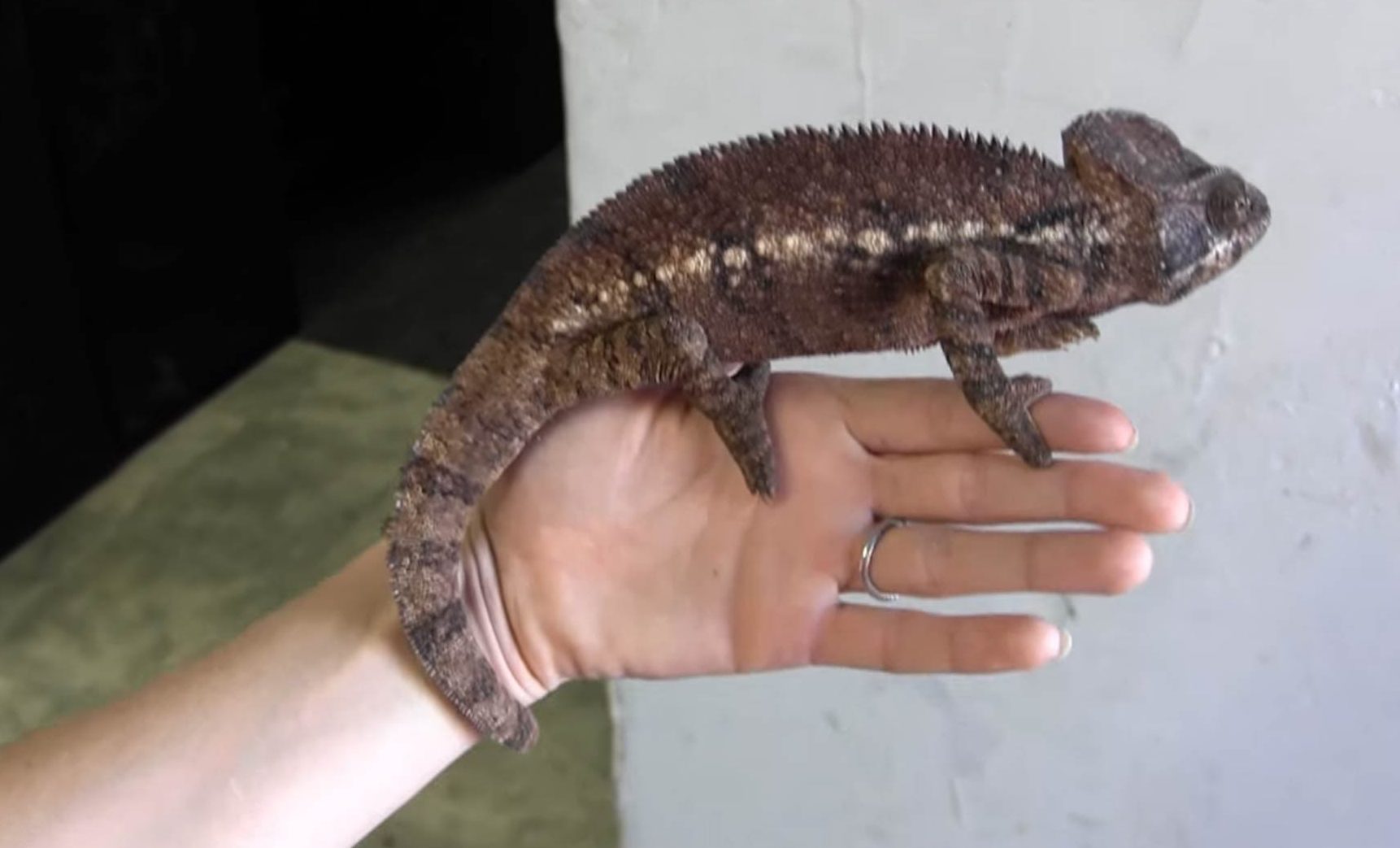 The Oustalet’s or Malagasy giant chameleon is usually found in fruit trees and shrubs. This is because the fruit attracts their favorite prey: insects!

These insectivores are one of the biggest species of chameleon in the world and measure at 27 inches on average!

If you are looking for a chameleon to call a best bud, then check out our list of the best chameleons to own as pets. Keep in mind, however, chameleons are not for everyone because they require a lot of consistent and high-quality care. To find out if one of these unique lizards is right for you, check out our article dedicated to deciding whether chameleons make good pets.

FAQs About What Florida Lizards Eat

Most small lizards drink water in a strange way. They lap at the droplets of dew that form on leaves, branches, and even on their own bodies! They also get a lot of moisture from their prey.

Larger lizards like the Argentine black and white tegu and the Nile monitor will find small bodies of standing water to drink from, as they need a substantial amount of water to thrive.

Is there such a thing as ‘the’ Florida lizard?

There is no such thing as a “Florida lizard” as far a unique species goes. However, many lizards are indigenous (or native to) Florida.

Owing to the state’s incredible biodiversity, what Florida lizards eat is pretty simple…anything they want! Florida is a haven for lizards because of its humid and warm climate. Its diverse plant, insect, and animal populations are also ideal for a variety of lizards’ diets.

Insectivores, herbivores, omnivores, and carnivores have access to an all-you-can-eat buffet all day long. Unfortunately, this may not always be the case, as invasive species numbers are also increasing, which is negatively impacting the numbers of the native populations.