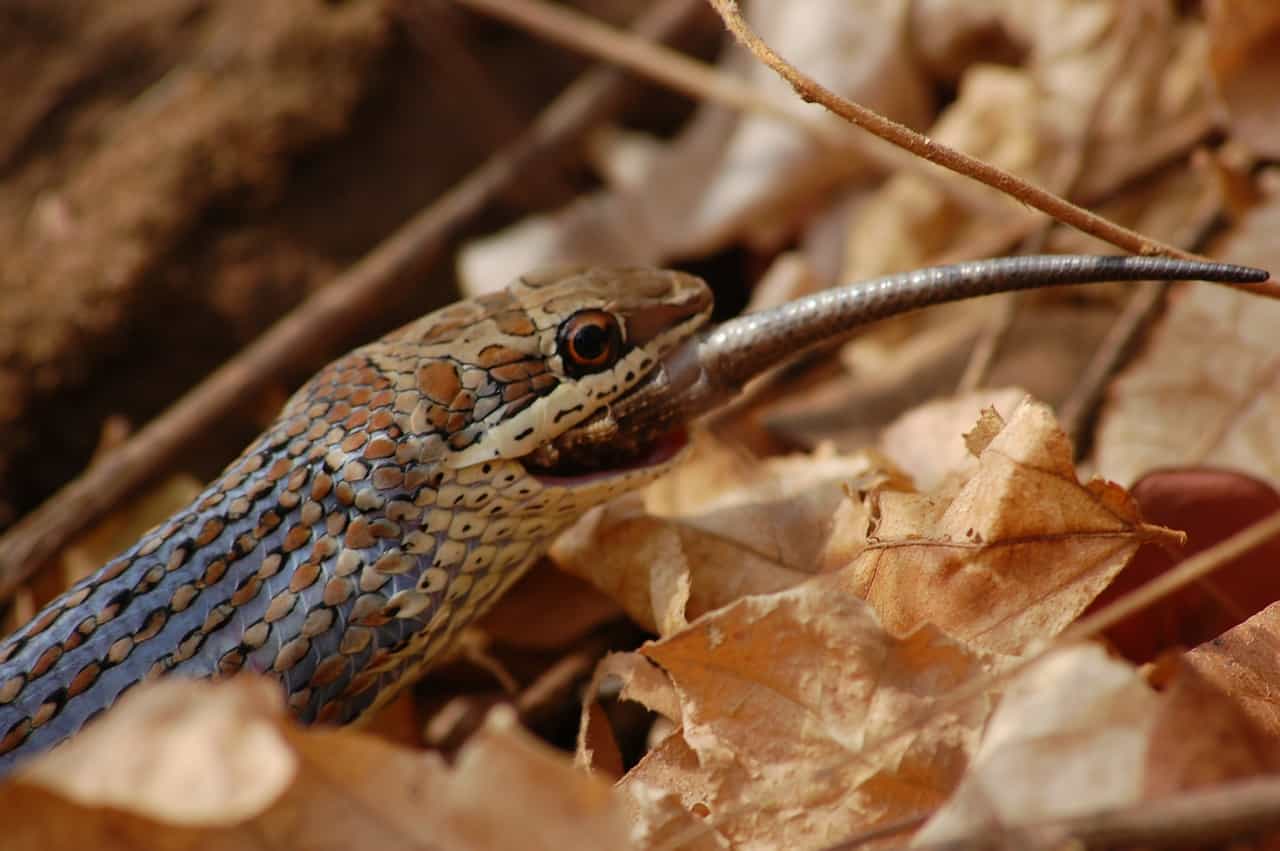 Snakes are fascinating creatures! Among all of their unique qualities like smelling with their tongues, sensing heat around them, and their ability to shed, they can also go for extended periods of time without eating! Now, you may be wondering: how long can a snake go without eating?

The record for the longest time a snake has gone without eating is held by a royal python, which did not eat for over two years! Even though this is a mind-blowing fact, going for years without eating is not healthy for snakes.

Snakes can control their metabolism to speed up or slow down depending on their available resources. This means they will eat more or less depending on their environment. Read on to see how snakes manage this amazing trick of nature!

Why Can Snakes Go So Long Without Food?

Snakes have evolved the ability to go without eating for months at a time in order to survive in the wild. In their native habitat, there is no guarantee when a snake will get its next meal. Therefore, they are very careful when it comes to expending energy.

Through this clever control of their metabolism and energy expenditure, snakes are able to go a long time without food. Just because a snake can go without food for a long time, though, doesn’t mean they should regularly, especially in captivity.

How Long Can Snakes Go Without Food?

As I mentioned before, the world record holder for the longest time a snake has gone without food was a royal python with a two-year fast. Now, while this is an awesome fact, you should not be purposefully starving your snake to see how long they can last before they get sick.

The average amount of time a snake can survive without food and not start starving and using up fat reserves is two months. Once a snake hits the two-month mark without food, it starts using its fat reserves.

This is a natural process when snakes go into brumation or are unable to catch prey in the wild. However, in captivity, it is unnecessary for them to undergo this process unless they have become obese.

How Often Should Your Snake Eat?

You can judge how long your snake can go without food and how often they should eat based on the species of snake you have, the age of your snake, the total size and weight of your snake, and the time of year it is (the season).

Smaller species of snakes with faster metabolisms such as corn snakes and garter snakes need to feed more regularly. Therefore, they cannot go for long periods between feeding without entering the starvation period.

Larger species like reticulated pythons will eat large meals once a month and can go much longer between meals.

Younger snakes need more food and more protein than older snakes because they are growing and developing their muscles and internal organs. Therefore, they should not go through forced starvation periods.

However, some species require brumation in their first year of life before they start eating, so make sure you do your research based on the type of snake you have.

Size will partially determine how long a snake can go without eating. A small, delicate snake with very little meat and fat on it like a rough green snake cannot go for very long without entering the starvation period (at most a couple of weeks).

However, heavier snakes such as woma pythons have enough fat and meat on them that they can go a couple of months before entering the starvation period. 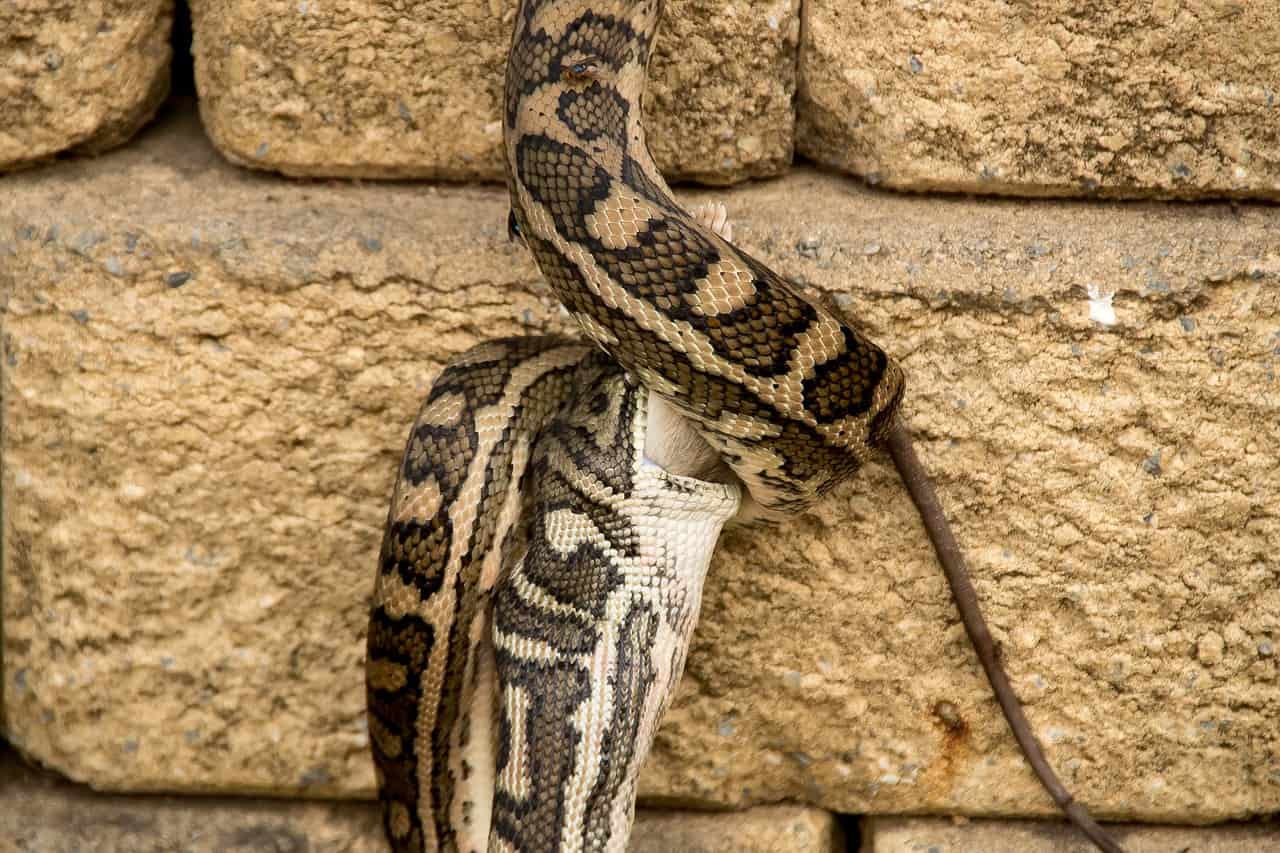 During colder seasons, snakes are unable to get the warmth they need in order to maintain their metabolism fast enough to digest food. Additionally, prey items are also scarce during the winter months.

Therefore, snakes undergo brumation to increase their chances of survival. Brumation is the reptile equivalent to mammalian hibernation.

During the winter months, snakes will either eat less or stop eating altogether. You do not need to simulate brumation in captivity unless you are preparing to breed your snakes.

Your snake can and will stop eating for a number of reasons. 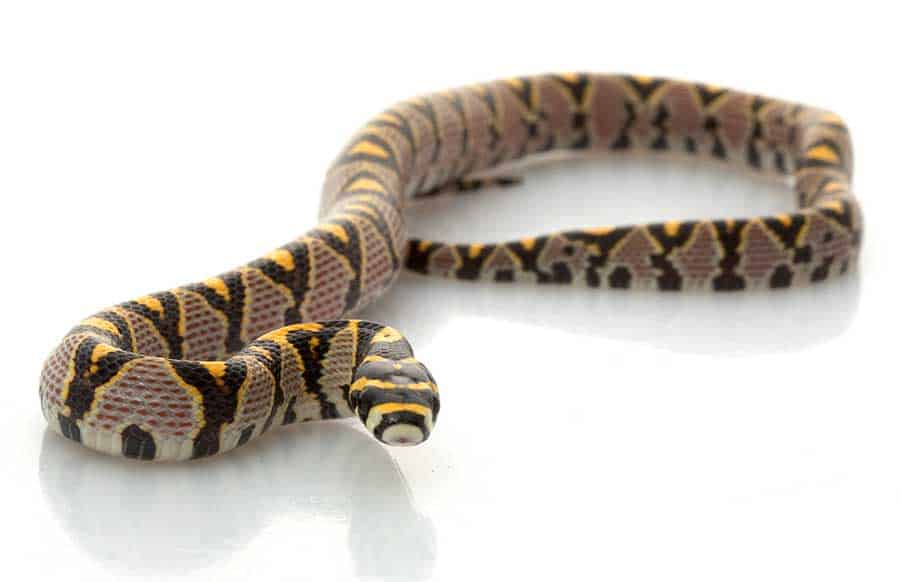 FAQs About Snakes and Their Food

How often should I feed my pet snake?

This will depend mostly on the type of snake you have. Smaller snakes such as corn snakes should be fed once every seven days, whereas a larger snake such as a gopher snake or ball python can be fed once every 14 days.

You can keep all of your snakes on a weekly feeding schedule by decreasing the size of their prey. One frozen/thawed feeder animal that is as thick around as your snake’s head every seven days or two feeder animals of the correct size every 14 days is usually sufficient.

What should I feed my pet snake?

The best food for a captive snake is frozen/thawed pinky mice or rats depending on the size and age of your snake. Some smaller snakes will also eat insects or even frozen baby birds.

I am going on vacation for two weeks. None of my friends want to feed my snake. What should I do?

Unlike bearded dragons, snakes can manage for two weeks without food. However, snakes cannot manage two weeks without fresh water or with incorrect temperature and light settings. Make sure your timers and thermostats are set correctly, and have someone come by to check on your snake every couple of days.

What happens after a snake has used up its fat stores but still does not eat?

Like mammals, when a snake uses up all of its fat stores and still does not eat, it starts breaking down protein to use as fuel. The protein it breaks down is muscle. This means that the snake will be breaking down its muscles it uses to move as well as its heart muscles and other muscles it needs to maintain its organs.

This is why even though it is possible for a snake to go a year or two without eating, it is not healthy and can lead to death.

Snakes are amazing creatures. They slither, eat their prey whole, hang out in trees, bask in warm light, have fangs, and can go without eating for a very long time!

A typical snake can go for around two months without any food before it starts using its own fat reserves as energy. If it needs to, it can use these fat stores to fuel it for a year on average! However, unless you are brumating your snake, there is no need for you to stop feeding your snake on a regular feeding schedule.

Regular feeding schedules help to keep your snake healthy and in a good mood, as it can predict what will happen around it at all times, which helps to reduce stress and aggression.

Cynthia is a reptile lover who volunteers in rescues and shelters and is a passionate advocate of animal welfare and conservation.