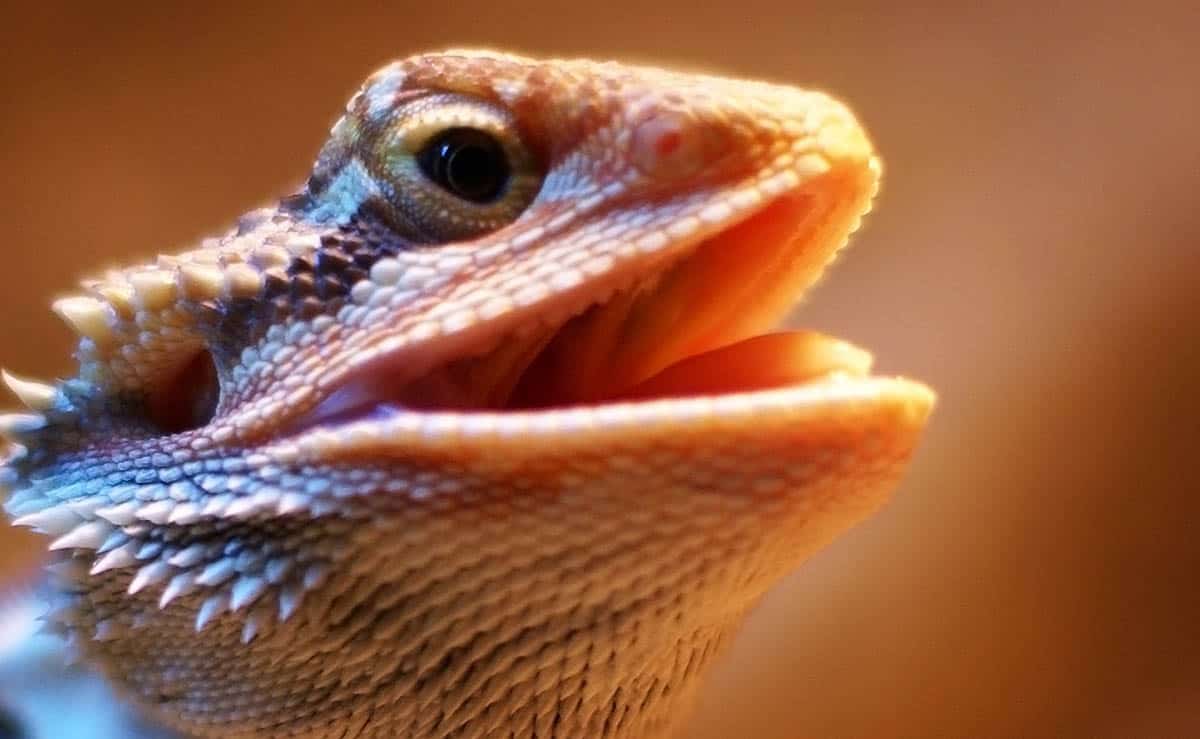 While bearded dragons might not be able to talk to us, they have big personalities and can be very communicative if you know what to look for.

One body language trait many people notice about their beardies is that they do a lot of licking. They can lick everything in the habitat; they will often look like they are licking the air, and they will even occasionally give you a good lick. What does it mean when your bearded dragon licks you?

In this article, we will explore exactly why bearded dragons seem to lick everything in sight. Spoiler alert: it is nothing to worry about and just a natural response to certain things in their environment! Reptiles like bearded dragons interact with their surroundings very differently than humans do.

To better understand why beardies lick things so much, it’ll help to first understand the structure of their tongues and how beardies use them to learn about their environments. The tongues of bearded dragons look quite different from the tongues of other reptiles, which tend to be long and flat and almost slither in and out of their mouths like a snake.

Bearded dragons have shorter, wider tongues that almost look human–that is, except for the color. It is quite common for the tip of their tongues to be light pink, white, or yellow. Their tongues are also slightly forked at the end but not nearly as prominently as other reptiles like snakes and larger lizards.

Their tongues are also quite different from human tongues in terms of how they work. They are very sticky and work a bit like a spider’s web. When prey touches their tongue, they are trapped, making hunting quite a bit easier.

Bearded dragons also have an additional organ inside their mouths known as the Jacobson’s organ or the vomeronasal organ. Situated at the roof of their mouth, this organ provides a sense of smell through particles picked up by the tongue. This means bearded dragons can smell with their tongues! 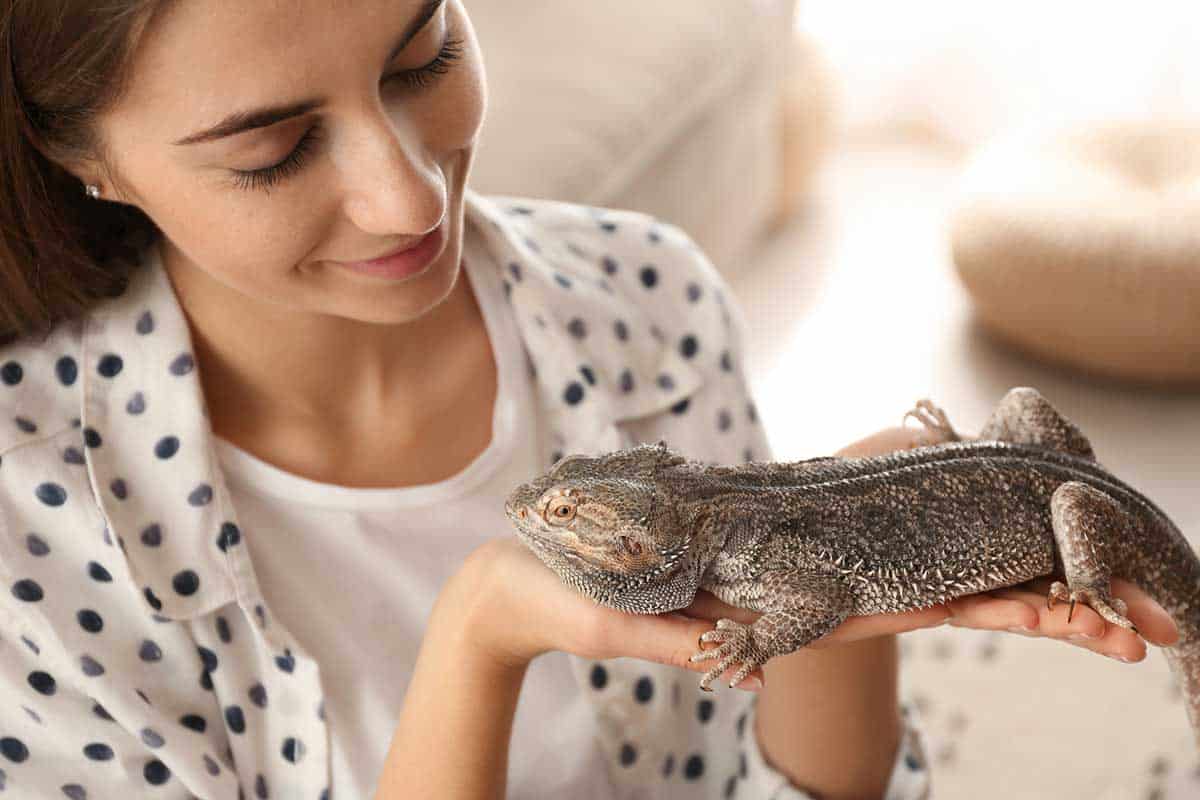 Licking is an instinctive action that bearded dragons will perform in a variety of different circumstances. Below are the most common.

Since tongues provide a sense of touch, taste, and smell for bearded dragons, they are one of the main tools that these lizards use to gather data and explore the world around them.

This is why you might notice your bearded dragon licking a lot when you first bring them home or introduce them to a new environment. They are trying to figure out where they are, who you are, if they are safe, and where the good food is. You will probably see a noticeable reduction in their licking as time passes.

If they suddenly start licking a lot when you haven’t changed anything in their environment, this can be a sign that they are stressed out. It probably means that something has changed, and you just need to work a bit harder to identify it and correct the problem.

Licking can also be an involuntary response when bearded dragons feel hungry. Licking the air helps them track and then capture prey, so they will start doing this when they feel the urge to eat. 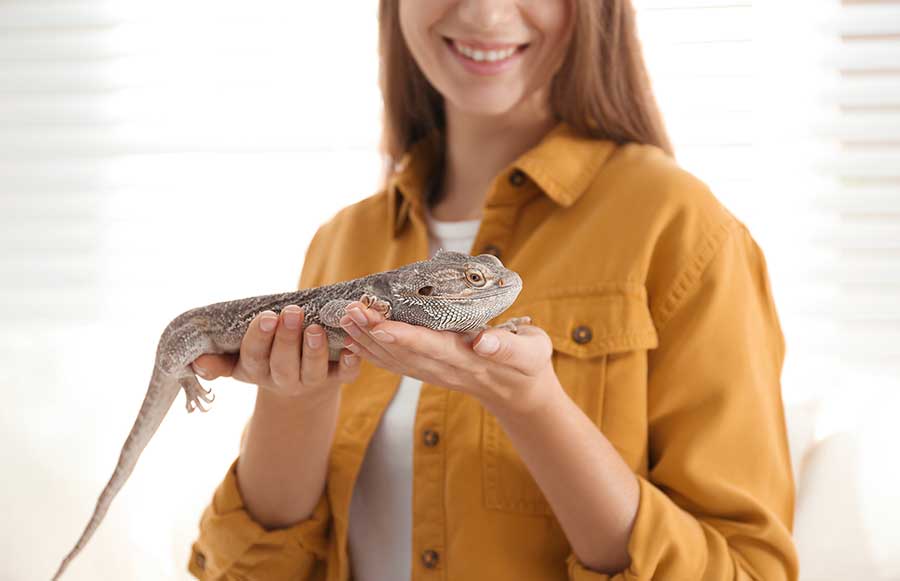 If you have a bearded dragon in captivity on a consistent feeding schedule, you will probably notice that they start licking the air not long before feeding. This is an involuntary response, as their bodies have learned to expect food at this time.

Bearded dragons also might start licking pretty much everything around them when mating season comes around. They are using this sensory tool to help them track down potential mates, but it is also a non-threatening form of body language that indicates to potential partners that they are available and ready to hook up.

If they are licking you around this time, there is nothing to worry about. They aren’t confused about your species; they just have an urge to lick pretty much everything at this time.

Bearded dragons, especially males, will also use licking as a way of marking their territory, leaving their saliva and smell on things for other lizards to detect.

Unless you have multiple lizards together, you probably won’t see this happening too much in captivity. They aren’t in competition with anyone, so they don’t have the same need to mark.

Of course, it would be a different story if you had two bearded dragons together. However, it is not recommended to keep multiples together, especially not males. If you do have more than one, each should have their own habitat.

While it is not licking, bearded dragons might also sometimes be seen with their mouths open and tongues lolling out. This is very different from licking and is known as gaping.

As they are cold-blooded ectotherms, bearded dragons usually gape their mouths to help regulate their body temperatures. They heat themselves through sunning, and then, when they reach their desired temperature, they open their mouths to let the heat escape and cool down a bit.

Many people wonder whether their bearded dragon licking them could be a sign of love and affection.

It is doubtful that these lizards feel love and friendship in the human sense, so it is probably not what you think. However, it could be a sign of familiarity. Your taste and smell are familiar, and they could seek out that familiarity and comfort for instinctive reasons.

Many people worry when their bearded dragons start licking them, as it is only a small step from a lick to a bite. Fortunately, if they are licking you, it will almost never escalate to biting.

Bearded dragons will rarely bite large animals for no reason. You are only really at risk of biting if you handle them roughly or otherwise abuse them. They have a right to defend themselves, and biting is their primary defense mechanism.

Bearded dragons display a variety of other body language cues that can help you understand what is going on with them. Below are some of the most important.

It is common for Bearded Dragons and other lizards to bob their heads up and down. This can be to attract a mate, scare off predators, and reinforce social hierarchies by demonstrating submission.

Read our full article on lizards and head bobbing here.

When bearded dragons puff up the pouch around their chin, it usually means they are on the defensive and are trying to look bigger and more threatening. It can also happen as part of mating rituals or when they are feeling otherwise stressed. Some dragons will also momentarily stretch their beards when yawning or while shedding.

If your beardie slowly lifts up an arm, starts making a circular gesture, and then brings it back down, they may be showing respect to a more dominant dragon nearby. Arm waving is also especially common amongst female dragons showing submissiveness and a willingness to mate to nearby male dragons.

It is relatively rare for these lizards to raise their tails, and when they do, it is a sign that they are trying to dominate another animal or that they are on the alert. Bearded dragons will also sometimes wiggle or lift their tails when hunting prey.

You will often notice bearded dragons bulging their eyes shortly before they are ready to shed their skin. This can look quite frightening and alarming to uninformed reptile owners! Thankfully, despite how creepy it looks, eye-bulging is part of the skin loosening process that allows for a smooth transformation. 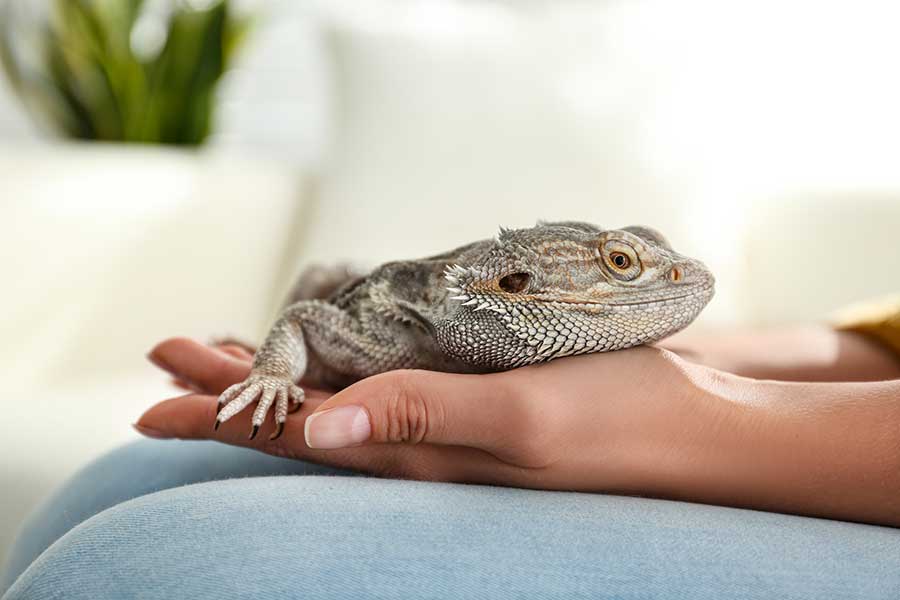 How do bearded dragons show affection?

You will know that your bearded dragon is happy with you if they treat you pretty indifferently or like a tree to climb on and relax in. If they aren’t biting you, bobbing their head at you, puffing up, or hissing, the chances are you are one of their favorite people. Reptiles don’t really show affection in the same ways we do, but they can still certainly bond with their owners.

Do bearded dragons recognize their owners?

Bearded dragons can recognize different individuals and even grow to trust certain people, especially if they are the deliverers of food. This is why your lizard may respond differently when you pick them up than when passing them to a friend. They may use licking to identify who exactly they are engaging with.

Can you kiss a bearded dragon?

As cute as they are, it is not recommended to kiss a bearded dragon because they can carry salmonella, which they can easily pass to you and cause you a pretty upset stomach. This is also why bearded dragons don’t belong in the kitchen. Always wash your hands thoroughly both before and after handling your beardie.

Do bearded dragons get lonely?

No, bearded dragons don’t get lonely, and they have evolved to live happily on their own. As long as they have a suitable enclosure setup and proper nutrition, they tend to be pretty content in captivity by themselves. But they are also happier than most lizards to be handled by humans.

Bearded dragons love to lick things, and this is normal behavior that you should not be worried about. Licking activates their senses and lets them analyze the world around them. It can also be used as a signal to mate and to mark territory. Licking is usually an instinctive reaction to whatever is happening around them.

So what does it mean when a bearded dragon licks you?

They aren’t getting affectionate or preparing to take a bite out of your arm. They are merely identifying you, and if you have been together for a long time, that you represent safety, security, and probably a good meal.

Do you have any burning questions about bearded dragon body language? Leave them in the comments section below.